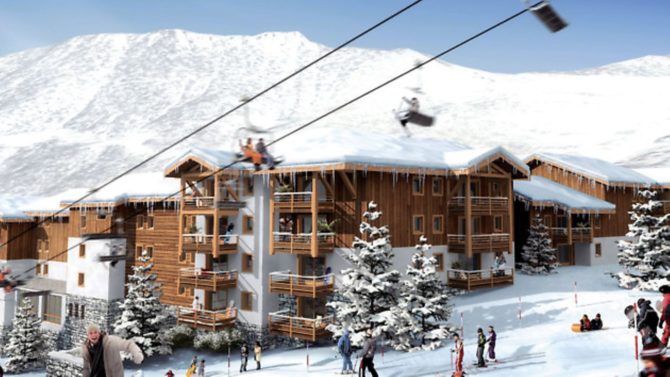 Valmorel, a French Alpine pedestrianised village popular for year-round family holidays, has a new feature on its skyline – a pair of tower cranes working on the creation of a new résidence de tourisme taking shape the edge of the town.

“Cranes are a rare sight in this part of the French Alps, within the Grand Domaine area linking the Tarentaise Mountains with the Maurienne Valley,” says Richard Deans in the UK sales office of developer MGM which is building the new scheme. “Valmorel has seen little development in the past 40 years but, despite that, it offers an attractive alternative to many of the better-known ski resorts with its stunning scenery, pretty village, great views and 150 kilometres of ski slopes.

“What makes Valmorel unusual is that, unlike so many other French ski resorts which opened their doors to countless developers during the building boom years of the past decade, the Mairie (town hall) pledged to preserve the character of the village by turning down most applications for planning permission.”

MGM’s scheme found favour because, when decision-makers within the Mairie considered its plans, they were already well aware of its reputation as the leading developer in the French Alps – where it has been building ski properties for 50 years – and its responsible approach to the environment. A founder member of Sustain Worldwide – a business alliance that drives profitable sustainability to the heart of global property development – MGM frequently is invited by local authorities to build ski apartments on the basis of its track record alone.

Until recently Richard was describing Valmorel as “little-known” but the arrival of Club Med, which has opened a luxurious five-trident hotel whose clientèle include families as well as those with more expensive tastes, has put the village firmly on the map.

That has been good for MGM’s sales, reports Richard who says that it is not unusual for British skiers who visit a new area, stay in a hotel and fall in love with the resort to return and buy a place of their own.

Already more than half of the 86 apartments MGM is building in the first phase of its new ski-in, ski-out development, La Grange aux Fées, have been sold. Still available are one-, two- and three-bedroom apartments at prices ranging from €217,000 to €363,000. These prices exclude French VAT at 19.6% which is waived under the leaseback scheme.

Because there has been so little development in Valmorel over the years, the choice of properties available to buy is limited and, as its popularity increases, prices will be forced up in the years ahead, predicts Richard. “That has to be good news for people who invest now,” he says.

Every apartment at La Grange aux Fées comes with underground parking and cellar storage as well as use of locker rooms, a laundry and drying rooms. Four-star facilities within the résidence include an indoor pool, fitness suite, gym, sauna, jacuzzi and steam rooms, as well as an OdesCimes beauty centre with a variety of massages and treatments on offer.