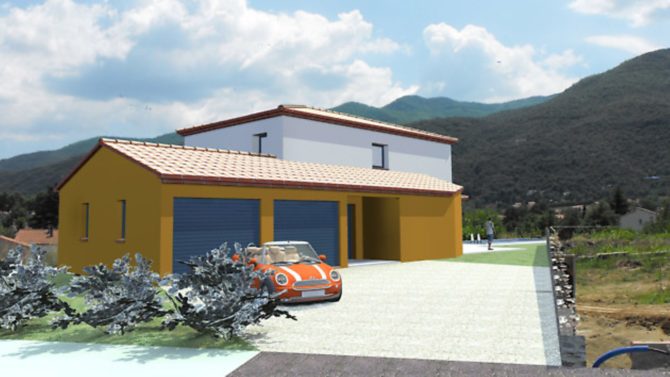 If you are searchnig for a plot of land in France, Peter-Danton de Rouffignac investigates how the system works

Buying a new-build property throws up a number of options to consider when acquiring your French home, including buying a home that has just been completed, purchasing off-plan or even entering into a self-build project. The last of these offers you the unique chance to create an exciting and innovative building to your own design.

In this article we look at what your options are when choosing a site, how even the most difficult terrain can be made suitable for building, and what advice and expertise are available to help you each step of the way, from the initial search to completion.

CONSTRUCTIBLE LANDFirst, it is important to bear in mind that just because a parcel of land is advertised for sale as ‘building land’ this does not mean that it comes with any sort of guarantee or even that it is suitable for building on.

All that the term implies is that the parcel of land has been officially classified as constructible – that is, falling outside land designated as agricultural, liable to serious risk of flooding (‘zone rouge’) or intended for industrial or commercial use. There can be exceptions within all the above categories such as those allowing some construction, subject to conditions, on land liable to flooding but where the risk is regarded as ‘moderate’, as we shall see.

One of your first choices is between selecting a remote rural location or a parcel of land that has already been divided into building plots and on which individual homes can be built. A remote location comes with its own attractions such as the peace and calm of the countryside, a spectacular view, isolation from neighbours and mature forests or a river or lake. You may also be able to get a larger plot than would normally be available on a housing estate.

There are a number of downsides, however. In the absence of public transport, you will need to be prepared to always use your car to reach the nearest shops, hospitals and other facilities. The terrain may be costly to build on and may require extensive landscaping, while services such as electricity, broadband and water may have to be provided over long distances. Even a simple utility connection over a relatively short distance can cost from €6,000 to €10,000. It is unlikely there will be mains drainage, so a fosse septique will have to be installed, and fuel for heating and hot water will mean either using electricity (possibly with solar panels) or oil or gas stored on site. You will probably have access to plenty of fuel for your wood-burning stove, however.

The boundaries of some remote properties may not be precisely fixed, requiring the services of an expert géomètre (costs from €1,000) and it may be advisable to have soil tests to establish whether it is feasible to build a property on the site.

It may also be necessary to provide proper road access for vehicles, including contractors’ equipment, if a paved road or driveway does not already exist. As a result construction costs can be typically 15% to 20% higher than for a similar property on an estate (lotissement) but you are largely free to do your own thing, including building a bigger property than would normally be possible on a housing estate or plot of land close to other dwellings.

SUITABILITY OF THE LANDAs noted above it can generally be assumed that land offered on a lotissement has been tested and passed as fit to build on. However, some unscrupulous constructors have been known to bypass the process or offer it as an option to intending homebuyers, who may decide to go ahead with their building project, without having the subsoil tested. This has resulted in cases where foundations were not correctly designed or an underground water table ignored, leading to sudsidence, cracks in the building structure and in some cases a landslide and collapse of the building.

Note also that the owner of a parcel of land offered for sale is not obliged to have it tested or even to allow potential purchasers to have access to the land in order to carry out tests, before signing a compromis de vente. This situation alone might raise suspicions and if you decide to proceed you would need to insert a carefully worded clause suspensive in the compromis, allowing you to withdraw from the purchase without penalty should the soil tests prove unsatisfactory.

As an initial first step, you can do your own visual check for a number of telltale signs. Look out for the presence of certain types of vegetation (particularly reeds) or trees such as alder, poplar or willow, all of which indicate that there is water below the ground surface.

Trees that are bent and not upright, as well as electricity and telegraph poles sunk deep into the ground, can indicate land that is liable to slippage and almost certainly the presence of clay in the subsoil. Land that is close to a swamp (un marécage) or to an area liable to flooding is probably best avoided, even though it may be classified as medium risk or ‘zone bleue’, where a building permit may be issued subject to certain conditions.

Equally problematic is land that has been reclaimed and comprises infill from an abandoned mine or quarry, or has been ‘cleaned’ following industrial use. Among the evidence to look for is land that appears to have been flattened, but is void of vegetation, and comprises sudden humps or small craters.

It is helpful if you are able to speak to the neighbours and in some cases examine nearby houses which may reveal cracks or other signs of subsidence. You can also visit the local mairie to check if there is a history of building damage due to excessively dry soil or, more commonly, local flooding. Remember, however, that many buildings in London and the south- east of England are built on a clay subsoil and have survived for decades.

As a consequence of the extensive flooding caused by hurricane Xynthia on France’s west coast in February 2010, flood zoning has become more precise, with many buildings susequently condemned to be destroyed and no-construction areas widened, with the creation of new ‘zones noires’. Investigations after Xynthia, where damage was estimated at €2bn, revealed that planning regulations had been ignored or interpreted loosely, even though after the event many long-term residents preferred to stay rather than see their homes destroyed.

A second new category of ‘zone jaune’ was also created, covering areas where there may be a potential risk of flooding, but adequate safeguards are in place (stricter building norms, flood warning systems, emergency evacuation procedures). It is likely that similar changes will follow the spring 2013 floods in the Aube department, where the River Seine burst its banks in several areas. Along the Mediterranean coast, concerns about high tides have already led to regulations about the required height of dwellings above sea level.

According to the French governmental website, as many as 17 million French residents live in areas liable to some risk of flooding (geographically 10% of France’s total land area) and some 850,000 in coastal regions potentially subject to high tides.

CHECKING THE SUBSOILIf you decide to go further with your research, the next stage is to commission a geological survey of the land on which you wish to build. There are a variety of techniques used, including drilling a number of boreholes to a depth of five metres or more, using a percussion hammer that measures the resistance of the ground at various depths in the subsoil. More sophisticated techniques include taking samples of the subsoil at different depths using a cylinder-shaped drill (known as a carotte); or by injecting an electric charge into the subsoil and measuring the levels of resistance.

The test results may indicate the presence of clay, which has a tendency to expand when waterlogged and contract when dry, thus causing subsidence.

Cavities found in the subsoil are also cause for concern, as are any traces of chemicals or other pollution on a site that may have previously been used industrially.

The objective of the various tests is to determine what lies underneath and – if it is decided to build – what depth and type of foundations are required in order to firmly anchor the building to the terrain. Geological tests of the type described above will cost from €1,500 to €2,000 upwards depending on the area to be covered. The type and cost of the building foundations required will be subject to estimates from an architect or structural engineer and eventually a building contractor.