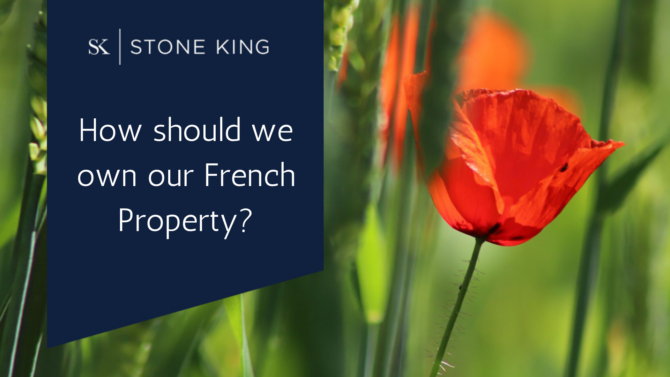 In this article, Bryony Anning of Stone King’s International & Cross-Border Team discusses the ways in which you can own French property.

Denisa and Jacques are a married couple, who live in Bath with their two young children, Eddie and Evie. Denisa is a British national and Jacques is a dual British/French national.

Denisa and Jacques are in the process of buying a French holiday home together and they would like advice on how to own their French property. Their main priority is that on death, the French property is left to the surviving spouse, if possible.

In France, most couples own their property en indivision, which is similar to owning a property as tenants in common in the UK.

If your French property is owned en indivision, each party owns a distinct share of the property. This can reflect the parties’ financial contributions, although it is usual for married couples to own their property 50/50.

On death, your share of the property owned en indivision will not automatically pass to your spouse – it will pass into your estate and may* be subject to French inheritance rules. These are colloquially known as ‘forced heirship’ and they can take precedence over a will.

In his will, Jacques wishes to leave his worldwide assets to Denisa, including his share of the French property. However, if the French forced heirship rules apply, Eddie and Evie will be entitled to 2/3 of Jacques’ French assets – the remaining 1/3 will pass to Denisa under his will.

This means that the French property would be co-owned by Denisa and her two young children. This would be impractical if Denisa wishes to sell the property in the future. She may need the funds tied up in the property to look after the family.

Another way to own your French property is en tontine, which is similar (in effect) to owning a property as joint tenants in the UK.

On Jacques’ death, the French property owned en tontine will be deemed to be owned entirely by Denisa and it will not form part of Jacques’ estate. On Denisa’s death, she can pass the property to her children, Eddie and Evie. This option meets our clients’ objectives.

However, it is important to note that it is not possible to take out a mortgage on a property which is purchased en tontine. This is not an issue in our scenario, as Denisa and Jacques are cash buyers – they recently inherited a sum of money and intend to use this to fund the purchase.

Another consideration is that, depending on your individual circumstances, you may not be making the best use of your inheritance tax allowances.

Before you decide to own your property en tontine, we strongly recommend taking cross-border legal and tax advice. Advice should be sought sooner rather than later, because a tontine clause needs to be inserted into the purchase deed – it is not possible to add a tontine clause at a later date.

There can be practical benefits to owning a property via an SCI, especially in cases where there are multiple owners and it can be an effective way of managing property on behalf of a minor.

Also, there can be tax advantages to owning a property via an SCI, although it is important to take expert advice, particularly if there are cross-border issues to consider.

Whilst it is possible to take out a mortgage on a property owned via an SCI, please note that the mortgage may be subject to more restrictions.

The cost of setting up and winding up the SCI should also be carefully considered and there will be ongoing reporting and accounting obligations.

As full-time professionals and parents of two young children, Denisa and Jacques do not have the time to deal with the administration of setting up and running an SCI and so decide not to go for this option.

Which ownership structure will be best for me?

Ultimately, the best way to own French property will depend on your circumstances.

After careful consideration, Denisa and Jacques have decided to purchase their property en tontine. This option meets our clients’ objectives – that the French property is left to the surviving spouse in the first instance, and then to the children.

There are a number of other French ownership structures, including by matrimonial property regime, but these are outside the scope of this article.

If you would like to discuss the ownership structure of your French property, please contact Bryony Anning and the International & Cross-Border Team at Stone King LLP – either by telephone +44 (0)1225 337599 or email [email protected].

*If you are a British national, it is possible to make an election for English law to apply to your worldwide assets. However, a new French law has been passed which could limit the effectiveness of such an election. If the new law applies to you, French forced heirship will apply to your French assets.

Previous Article Get a VAT refund on everything you buy during your trip to France with ZappTax!
Next Article 10 Reasons to Visit Saint Germain Boucles de Seine