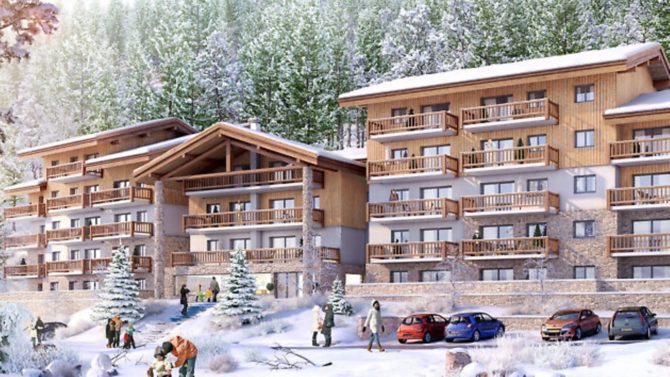 Buyers of La Rosière’s newest ski properties can skip queues and get straight on the slopes.

Dubbed ‘the sunniest ski resort in France’ and with plans to expand its ski area by 30 kilometres, La Rosière is one of the latest to offer skiers the facility to avoid queues by buying their ski passes online and receiving them before they leave home in the UK.

“This is great news for the buyers of the 33 leaseback apartments planned in the resort’s newest résidence de tourisme, Chalet Les Marmottons,” says Richard Deans of MGM, developer of the scheme in a ‘ski-in’ position just above the town centre.

“The first thing skiers want to do when they arrive is to get out on the slopes – not join a queue at the ski pass office – so this latest innovation will add a lot to the attractions and enjoyment of buying a ski property in La Rosière, particularly in view of the resort’s five-year plan to increase its pistes from 150 kilometres to 180 kilometres,” he says.

“The improvements include long-awaited new red and black runs which will give the resort – already known for its good beginner and intermediate skiing areas – the variety it needs!” Chalet Les Marmottons is MGM’s fifth development in La Rosière, the gateway to Espace San Benarado, the international ski area in the French Alps linking the resort with La Thuile in Italy’s Aosta Valley.

The design of Chalet Les Marmottons will be in keeping with the typically Savoyard timber and stone finishes which are a feature of the resort. Internally MGM has responded to research based on informal conversations with buyers, owners and guests in their résidences. The result is a blend of traditional materials with modern finishes – some internal walls are clad in wood or have bright white finishes; floors are in a mix of stone and larch parquet, and timber kitchens have given way to contemporary fitted models with granite worktops.

“These changes, combined with greater use of spotlights, create a 21st-century feel within our traditionally styled exteriors,” says Richard.

He added that the development is expected to achieve four-star status once it has opened for business and been assessed by Atout France.

Within a short walk of around 100 metres, apartment owners at Chalet Les Marmottons will have use of the family-friendly pool and leisure facilities in MGM’s most recently-completed résidence, Lodge Hemera, as well as its wellbeing and fitness centres. The off-plan prices of apartments at Chalet Les Marmottons range from €220,000 for a one-bedroom property with a floor area of 45m2 to €467,000 for a 100m2 four-bedroom home. The prices exclude French VAT at 20% which is waived under the leaseback scheme.

This two-minute video clip gives a brief insight into the nature of MGM’s new development and its location.

La Rosière, which is home to a wide variety of traditional French restaurants and numerous lively après ski bars within a short stroll of Chalet Les Marmottons, was built on the former Roman road through the Petit Saint Bernard Pass linking France with Italy.

Occupying a sunny south-facing mountain ‘balcony’ at an altitude of 1,850 metres, so that snow is guaranteed throughout the ski season, the resort has access to 150 kilometres of pistes within the Espace San Bernardo ski area which embraces La Thuile in Italy.

La Rosière is a 50-minute bus ride from Bourg St Maurice, the destination for Eurostar trains direct from London’s St Pancras International station during the ski season. The nearest airport is at Chambery, two hours and 45 minutes by road. Geneva Airport is three hours and 45 minutes away.