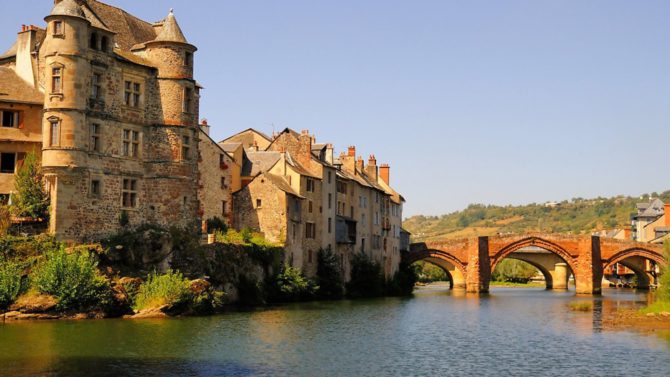 Looking for a property in the sunny south of France on a small budget? The French Riviera might be out of your price range but there are plenty of other places on in the south of France where you can pick up a bargain property

If you’re looking for a villa on the Côte d’Azur or a Provençal farmhouse among the lavender fields then you probably won’t get much change from €1 million. In fact, the average property price in Alpes-Maritimes is €425,100, in Var is €300,000 and in Bouches-du-Rhône is €291,000… However, if you move away from Provence into Occitanie and Nouvelle-Aquitaine there are 13 departments where the average property price is less than €150,000!

Neighbouring Tarn is the lovely rural department of Aveyron full of pretty towns and villages. Aveyron has no less than 10 Plus Beaux Villages including Najac, Sauveterre-de-Rouergue and Conques which is an important stopping point along the St-Jacques de Compostelle pilgrimage route. Rodez is the capital of Aveyron, a small but pretty city dominated by its Gothic cathedral and the world’s tallest bridge, the Millau Viaduct, is also found in Aveyron.

If you’re looking for a bargain property near the Mediterranean coast then the department of Aude in the far south of France could be the answer. Home to the beaches of Leucate, Grussian and Narbonne-Plage, Aude offers sand and sea without the tourists of the Riviera. Further inland you will find the two UNESCO World Heritage Sites of the Canal du Midi and Carcassonne as well as swathes of vineyards and historic Cathar castles. Throw in delicious food and local wines and it becomes the ideal location for your new home!

Where to buy a bargain property on the French Riviera

Climate: average temp of 18.5ºC although in summer the average jumps to 27ºC and there are 1,976 hours of sunshine a year

Dordogne has long been popular with British expats and visitors partly because of its cheap property prices. Dordogne is broadly divided into four areas known as Périgord Vert, Périgord Blanc, Périgord Pourpre and Périgord Noir and the capital is the town of Périgueux to the north of the department. Dordogne is home to 10 Plus Beaux Villages, including La Roque-Gageac and Monpazier, as well as the beautiful towns of Sarlat-la-Canéda and Bergerac which is known for its wines.

The department of Lot is less well-known to Brits than its neighbour Dordogne but it boasts spectacular scenery and sprawling countryside and several picture-postcard villages. The capital is the beautiful town of Cahors instantly recognisable thanks to the 14th-century Pont Valentré which spans the river, and surrounded by vineyards. The other must-visit place is the fairy-tale village of St-Cirq Lapopie perched on a cliff high above a bend in the river.

Corrèze is another rural department dotted with pretty villages, bordering both Dordogne and Lot. Corrèze is partly covered by the Millevaches regional park and much of the department boasts vast expanses of unspoilt countryside with chestnut-red cattle grazing in the lush green fields. There are six Plus Beaux Villages in Corrèze includeing the distinctive red-stone village of Collonges-la-Rouge. Tulle is the capital, once home to Jacques Chirac and François Hollande, while the largest town is Brive-la-Gaillarde.

21 traditional villages in Provence that you should stroll through

Climate: average temp of 8ºC although in summer the average jumps to 17ºC

Lozère is the cheapest department in Occitanie with an average property price below €100,000 so is the perfect place to find a bargain property. The department is a sparsely populated rural retreat including part of the Cévennes national park, the spectacular Tarn gorges, the Aubrac Plateau and the limestone Causses. Almost half of the department is forest and there are many rivers and lakes so, unsurprisingly, it attracts hikers, kayakers, anglers and skiers. The capital is Mende an attractive toen with an historic centre and plenty of half-timbered houses.

Found on France’s southern border with Spain and Andorra, Ariège is one of the cheapest departments in Occitanie for property and a good choice if you are seeking a peaceful rural retreat in the south of France. Ariège is sparsely populated and rural with 491 hectares of forest, and both the Pyrénées-Ariègeoises regional park and the Orlu Valley nature reserve within its borders. There are also several Pyrénées ski resorts, the spa town of Ax-les-Thermes and the pretty villages of Mirepoix and Tourtouse, plus the capital Foix.

If you are looking for both sunshine and mountains then you can’t go far wrong with Hautes-Pyrénées. The south of the department is mountainous with notable peaks including Pic du Midi de Bigorre and the Cirque du Gavarnie and there are a number of popular ski resorts. The capital of Hautes-Pyrenees is Tarbes and the sanctuary at Lourdes is a popular pilgrimage destination.

Things to consider before buying a renovation project

Just south of Dordogne, Lot-et-Garonne is home to a wealth of fortified towns and castles built during the Hundred Years’ War. Pretty bastide villages include Monflanquin and Pujols-le-Haut and the capital city Agen is worth a visit. With the Garonne River and a number of lakes means that fishing and water activities are popular pastimes and there are 80km of cycle paths to explore. Food specialities include agen prunes, duck confit and foie gras and plenty of local wines.

Haute-Loire is in the south of the Auvergne-Rhône-Alpes region, along the border with Occitanie and is another rural department. Around a third of its surface is forested and it is known for its cattle farming so the traditions of rural life remain strong. There are a few large towns including the capital Le Puy-en-Velay which is only the St-Jacques de Compostelle pilgrim route and is dominated by the Romanesque Notre Dame cathedral and the statue of the virgin towering over the city. There are also four Plus Beaux Villages and the Allier gorges and River Loire for outdoor-lovers.

In the region of Occitanie, Tarn offers culture and history in the sunny south of France and only a couple of hours drive from the Mediterranean coast. The department’s capital is the episcopal city of Albi home to the stunning Ste-Cécile cathedral, Berbie palace and the oldest bridge in France, as well as sunny squares filled with café tables. The rest of the department includes four Plus Beaux Villages de France – Puycelsi, Monastiés, Lautrec and Castelnau de Montmiral – rolling vineyards and the Haut-Languedoc regional park.

Located on the edge of the Massif Central, Cantal is named after the range of extinct volcanoes running through it. In the regional park of the Auvergne volcanoes, it has several impressive peaks including Puy Mary (1,787m) and Plomb du Cantal (1,855m) which are popular with hikers and paragliders. Cantal also has a number of ski resorts for winter sports enthusiasts. The capital is Aurillac, a pleasant old town with narrow streets and shady squares, and there are two Plus Beaux Villages, Salers and Tournemire.

Home to breathtaking landscapes, a mild climate and picture-perfect villages, Gers is a popular choice with British expats. Often referred to as Gascony, the name of the former French province, the area is foremost an agricultural one, with sunflowers being one of the most cultivated crops. Gers is a blend of rolling countryside and pretty towns and villages, including Condom and Marciac. The capital is Auch with an impressive Renaissance cathedral and statute of d’Artagnan the musketeer from Gascony.

However, if you really want to buy in Provence then try…

The northernmost department in Provence-Alpes-Côte d’Azur, Alpes-de-Haute-Provence is the place where the Alps meets Provence as so boasts both mountains and lavender fields. The department shares a border with Italy and is only 80km from the French Riviera. A major draw for visitors in summer are the Gorges du Verdon while in winter the luxury Alpine ski resorts attract tourists. The village of Moustiers-Ste-Marie and the capital of Digne-les-Bains are worth a visit, the latter the centre of lavender production in France. As the cheapest department in Provence-Alpes-Côte d’Azur by a long way, Alpes-de-Haute-Provence is the place to look if you still want to be in PACA but can’t afford Riviera prices.