Where do the French buy holiday homes and what do they pay? 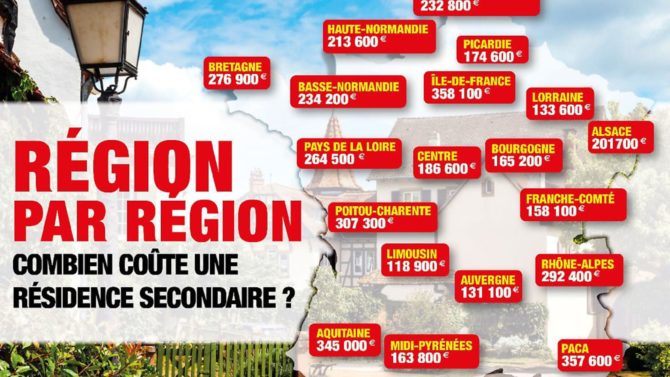 While British buyers head for ever-popular Dordogne or Brittany, where do French second home owners focus their search?

Many French people, especially city dwellers, own a second home. Many have been in their families for years. Whether they’re by the sea, in a rural village or in the mountains, there are in fact some 3.6 million second homes in France*, meaning one property in 10 is a holiday home!

If you’re thinking of buying a place in France yourself, or already own one, you may be interested to discover where the French have their holiday homes – and how much they pay for them.

According to a report by property commentator SeLoger.com, the average value of French holiday homes, new and old, is €268,100. But when it comes to where the French buy, there’s a vast difference between the three most expensive areas and the three cheapest.

1) Paris: Unsurprisingly, the capital and its wider region, the Ile-de-France, is top of the price list, with an average price for a ‘résidence secondaire’ of €358,100. It’s a high price to pay for a pied-à-terre but who wouldn’t want the Eiffel Tower, Champs-Elysées and Louvre on their doorstep, not to mention all the culture, retail opportunities, and restaurants and bars!

2) Provence-Alpes-Côte-d’Azur: The cosmopolitan French Riviera attracts property buyers from around the world but it’s popular with the French themselves too. This is the home of the jetset, swanning from the red carpet at Cannes to their yachts at St-Tropez and Antibes – to join them and buy an ‘average’ second home here, you’ll need a budget of €357,600.

3) Aquitaine: Covering a large chunk of south-west France, this is a super popular area with Brits too, home to the Dordogne and Charente. According to Seloger, the region has an average holiday home price of €345,000. That said, many parts of Aquitaine are very affordable so the average price may well have been hiked due to the presence of super-chic holiday locations like the Ile-de-Ré.

1) Limousin: Although no longer an official administrative region, landlocked Limousin includes the departments of Corrèze, Creuse and Haute-Vienne. These very rural areas offer peace and quiet away from the cities, ideal for a relaxing holiday home. The lack of large urban centres and industry has had the effect of keeping property prices down, so you’ll need an average of just €118,900 to buy here.

2) Auvergne: At the heart of France, with lush green forests covering extinct volcanoes, this is another very rural region. In days gone by it would have been very isolated and poor, but with improvements in road and rail networks, it’s an ideal place for a scenic country getaway. The average holiday home price is €131,100

3) Lorraine: Home to the famous quiche, Lorraine borders Belgium, Luxembourg and Germany, and is one of France’s most historic provinces. The average price for a second home here is €133,600.

The Grand Ouest area of France – encompassing Brittany and Pays de la Loire – is experiencing something of a boom, according to the SeLoger study – 40% of those polled plan to acquire a second home there. According to the survey, Ile-de-France/Paris residents in particular are focusing their search here, maybe due to its relatively easy access and affordable property.

Meanwhile, the south-east and south-west represented 28% and 13% of second home searches by French buyers.

Despite its worldwide fame, the south-east, including the Côte d’Azur, only accounts for 18% of holiday home searches by Parisians. Of course, that may well be because owning a home in each of France’s most expensive regions is out of reach to all but the lucky few!

Finally, a large majority of French second home buyers (75%) look in towns with fewer than 20,000 inhabitants.

It’s easy to see why – French towns of this size lack the crowds and hectic lifestyle of the cities but offer restaurants, bars, markets, theatres and other amenities with the beautiful French countryside on their doorstep.

9 French properties for sale at €99k

Previous Article Recipe: Festive Chestnut Velouté with Porcini
Next Article Do I need a separate French will to cover my property in France and how do I go about it?