Buy into the good life: How to become a French farmer 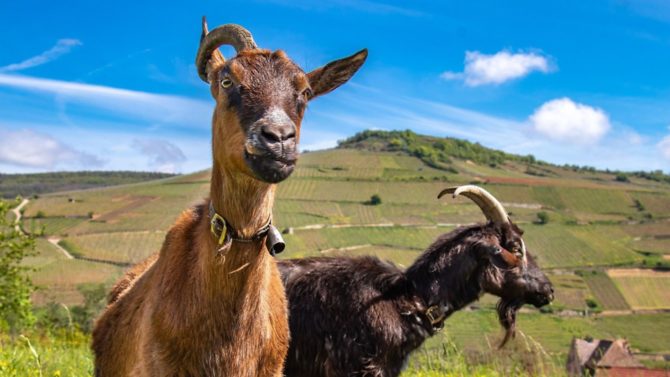 More than half of France’s surface area is devoted to farming, including a total of 12 million hectares of pasture – and the market is full of opportunities for savvy property buyers, says Chloe Govan

If you have a passion for rural life and are unfazed by the prospect of a 4am start, then buying a farmhouse and getting into French farming industry might be for you.

As Michael Parsons at Leggett Immobilier, whose portfolio includes multiple farmhouses, confirms: “Buying a farm in France is much cheaper than in the UK. “This makes it ideal for young people trying to get into farming. For first-time buyers it is necessary to research the French regulations governing farmers and the process involved in getting registered. It may be daunting at first, but there is a lot of help readily available.”

You need not be confined to cattle. Why not produce caviar or asparagus or rear goats or snails? Charles Miller, of Charente Immobilier, recommends buyers look for property in the north of the area if they want to run a sheep or goat businesses. “The south is drier with less grass growing in the summer, so it’s quite rare to see animal farming,” he says. “It’s mostly vines interspersed with sunflowers there”.

Meanwhile fans of the sunny Provencal climate may favour flowers, fruit and vegetables, and perhaps a property with a small orchard for producing the region’s specialties: apples, apricots, cherries, peaches and plums.

Occitanie is France’s largest sheep farming region. Then there is the Dordogne valley – once famed for its tobacco crops, but now more renowned for its health-conscious organic vineyards and arable land. No less than 90% of the quintessentially French delicacy foie gras is also farmed in Dordogne. There is even a major caviar farm in the region, where the owners earn extra profit by inviting tourists to come and “stroke a sturgeon”.

A mild climate with rainfall, coupled with free draining and fertile land is ideal for dairy farming. Buyers might seek a farm in Normandy or Brittany to achieve this balance, while the land could also be used for side projects such as wheat, rapeseed, oats and corn.

Perhaps one of the most quirky and off-beat agricultural projects of all is that of the snail farm. Despite snails being so widely known as a national delicacy, less than 5% of the 30,000 tons consumed each year are actually produced in France. Even the so-called Burgundy snails are mostly imports from eastern Europe. Yet Mike Collins – so far the only official British snail farmer in France – is attempting to redress the balance and profit from an increasingly lucrative, but as yet under-populated, market. It is a surprisingly accessible project even for those on a modest budget, as almost all that’s needed to start with is a large garden. Acres of land are not required. Mike, formerly involved in language teaching, chose the northern village of Râches in Nord-Pas-de-Calais for his farm – somewhere that was remote and spacious but also close enough to main roads to attract trade from other areas. Crucially, the area also boasts marshy land which is optimal for snails to thrive. No doubt anyone who has ever seen a trail of the tiny creatures after rainfall – and perhaps accidentally crunched them underfoot – can attest to this truth.

The world of snail breeding presented some surprises for Mike – for example, they are ‘tantric’ and consequently the mating process can take up to two days. The miniscule baby molluscs are then attached by hand to wooden posts and left to grow for two months, guarded from predators by Mike’s dog and a small team of “trained ferrets”. Those with a sensitive disposition may possibly find this type of work more humane than working with larger animals, as snails die instantly on immersion in boiling water, apparently feeling no pain. Mike has enjoyed creating a range of recipes from snail sausages to tikka masala snails – he even prepares them with Roquefort cheese and walnut butter. He supplies the produce to restaurants and markets, recently selling 3,000 at a time to a chef at a Michelin-starred restaurant in Lille. Today, drivers cannot miss the giant ornamental snail of over eight feet long which stands proudly by the roundabout outside the farm. Mike erected it to fulfil a promise to the dubious local mayor, who originally thought his business plan was “crazy”.

Farming life on this scale might not bring in vast financial rewards, and income can be unpredictable from month to month, but for those willing to sacrifice a flashy life in favour of the French countryside and the pleasure of simplicity, it could be the perfect project. Besides taking a short exam course to learn the basics, start-up costs are minimal – and there is clearly an unfilled niche in this off-beat area of agriculture.

10 things that may surprise you about life in rural France

Quiz: How well do you know your French cheese?

An important point to be aware of while property-hunting is that all agricultural land in France is subject to pre-emption law. This entitles certain parties to priority of purchase above anyone else already interested in buying – namely the local mairie, sitting tenants if applicable, and the rural land organisation Safer (safer.fr). Applications should be made to the latter once a sale has been agreed and the organisation will decide within a two-month period whether or not to exercise its pre-emption rights. If that period has passed without intervention, then the sale can go ahead.

Buyers must also apply for a permit for the right to farm, which is usually granted within the same length of time. Although there is seemingly endless paperwork, the rewards of farm ownership ultimately far outweigh the hassles of form-filling. Newly certified farmers will also be able to apply for perks such as Young Farmer status, where the under-40s are eligible for special grants and low-interest loans.

Get the best deal

Besides paperwork, practical aspects to consider when buying a farm include the quality of the water, as rural land is especially vulnerable to the risk of pollutants. Lisa Temperley, of Artaxa, advises: “Check if the water has been tested. “Some villages have high levels of arsenic and other chemicals [in their water supplies].” These problems can easily be resolved through filtration methods, so the priority is simply to be aware of them and create an advance strategy for dealing with them. Also look out for added expenses you may not have accounted for – for instance, if there is only a mains supply of water, it can be costly to set up – and make sure these are factored into your budget. As a money-saving tip, it is also worth negotiating deals to acquire machinery as part of the property package. Some owners include cattle sheds and stables with the land too.

The farming industry in France has scarcely ever been more lucrative – as the biggest producer of agricultural goods in all of Europe, the country heads a €116bn industry. So whether you snap up several hectares of land or go down the route of a more modest – not to mention eccentric – career farming snails in your back garden, there is a suitable project out there for you.

See the latest smallholdings on the market in France