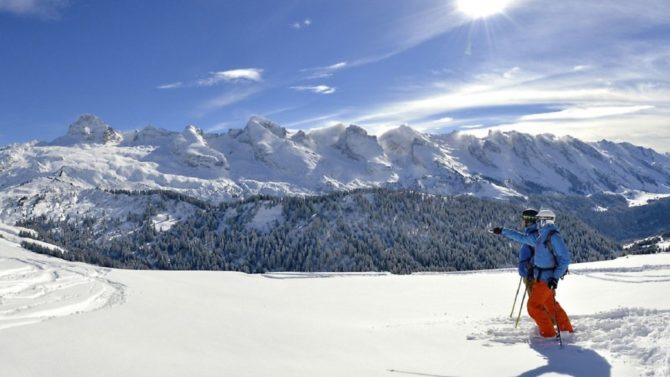 Looking for more affordable ski property in the Alps far from soulless, expensive, crowded and commercial resorts? Check out these peaceful, unspoiled and authentic ski destinations

A huge lime tree dating back 600 years dominates the traffic-free centre of Samoëns, a reminder that this Savoyard village is about as far as you can get from a purpose-built ski resort. In fact, you can’t ski in and out of this village, which is only 720m above sea level, and you could happily spend a holiday here simply wandering the charming narrow streets, sampling the cheese, skating on the ice rink and soaking up the laid-back, authentically French atmosphere.

Hop aboard the gondola or shuttle bus that departs from the village, however, and in minutes you can be on a 1,600m-high plateau at the gateway to the Grand Massif ski area, with 265km of snow-sure pistes connected to Flaine, Les Carroz and more.

Runs: 0 in the village but gondola and free shuttle bus to the Grand Massif

Victor Hugo hailed Combloux the “Pearl of the Alps”. That could have been the kiss of death for the Savoyard village facing the Mont Blanc massif, and yet today’s visitors will find an unspoiled French farming community with rustic architecture and a warm welcome. While the jetset head for nearby Megève, Combloux is a pretty and family-friendly area that is low-key, yet close to Chamonix.

Offering plenty for expert, intermediate and beginner skiers alike, Combloux is part of Les Portes du Mont Blanc ski area and linked to the huge Evasion area. The resort has the Famille Plus label, recognising its childcare facilities and family-friendly activities, which include horse-drawn carriage rides and swimming in Europe’s first ecological lake. The village has a weekly market and a spa, and the upmarket shops of Megève are only a few minutes’ drive away.

Loved for its diverse terrain, forest runs and value for money, Serre Chevalier is not a fashionable destination. Its image could change when the trendy Folie Douce hotel chain opens up in 2020 in Villeneuve, one of the 13 communities that make up the resort on the edge of the Ecrins national park. However, it is the lack of pretension and nightlife that appeals to many skiers, who also appreciate the friendly family-run businesses and the French feel of the villages with their narrow streets and cosy bars and restaurants. Le Monêtier-les-Bains (also known as Serre Che 1500) is the smallest, highest quietest and least spoiled of the four main resort villages.

Ranging in altitude from 1,200m to 2,800m, with the tree line starting unusually high at 2,150m, the resort has reliable snowfall and a long season. It offers 3,900 hectares of terrain with something to suit everyone, from beginners and youngsters to off-piste skiers, though some of the lift infrastructure is dated.

Praised in the Michelin Guide as the most beautiful vantage point for Lake Geneva, the village of Thollon-les-Mémises sits on a 1,000m-high balcony overlooking the glittering lake towards Switzerland. It’s a drive of less than 20 minutes down to the lakeside resort of Evian-les-Bains, which is bustling with sun-worshippers in the summer.

In winter, skiers in Thollon have direct access to 50km of downhill skiing, from 1,000m to 2,000m, with 14 north-facing pistes and 18 ski lifts. Beyond lies the rest of the Portes du Soleil, one of the largest linked ski areas in the world, with runs of up to 11km.

The jagged Pointe Percée and neighbouring peaks of the Aravis mountains for the magnificent backdrop of Le Grand-Bornand, a village between Mont Blanc and Lake Annécy. One of the birthplaces of Reblochon cheese, it famously has more cows than inhabitants and, with its covered market and historic chalets (some 300 years old), it has a special village atmosphere. “It truly feels like falling into old France,” says Chris Woodbridge-Cox, managing director of French Alps specialists Peak Retreats, and the skiing is good too, he adds, especially for beginners and intermediates. “There are lots of blue runs and a big beginners’ area at the top of the Rosay gondola. You can also get the shuttle bus to La Clusaz if you have the Aravis lift pass.”

Le Grand-Bornand is a great area to invest in, according to Richard Deans, a sales manager at Alpine property developer MGM French Properties. “It’s a really cute little place, very charming,” he said. “In summer, it’s very popular with mountain bikers and hikers.”

Best of the rest

Vaujany, Isère – charming farming village part of the massive Alpe d’Huez ski area. “It’s built on a sunny slope and the skiing is brilliant with a 160-person cable car that takes you up to 2,800m in just 15 minutes,” says Chris Woodbridge-Cox of Peak Retreats

Châtel, Haute-Savoie – lively village with nightclubs, cinemas, bowling alley and ice rink, yet much admired for its authentic Savoyard architecture and not too commercial. “Châtel is for skiers; not necessarily downhill racers, but people who are genuinely interested in skiing and the Alps as a region,” says Howard Watts of Alpine Property World.

Les Carroz d’Arâches, Haute-Savoie – part of the big and varied Grand Massif and linked to historic Samoëns down below and purpose-built Flaine up above. “It’s a really cool, unsophisticated little resort – not too crowded and only 55 minutes from Geneva,” says Richard Deans, of MGM French Properties. “It offers superb skiing with 265km of slopes and mostly all nice village skiing.”

Valloire, Savoie – a traditional village built around a 17th-century church in the Maurienne Valley close to Italy. “It’s quiet but incredibly welcoming as is often the case with smaller, family-run historic French resorts,” says Abi Butcher, an award-winning freelance journalist and skier. “Valloire shares a ski area with next-door Valmeinier, most of which is over 2,000m, so although it’s only set at 1,400m, Valloire’s ski area is high and offers reliable skiing and great value for money.” A Club Med is due to open in 2020 so the slopes are sure to get busier, but transport links should also improve.

Previous Article How Maigret became a French icon
Next Article Should I get a French driving licence?