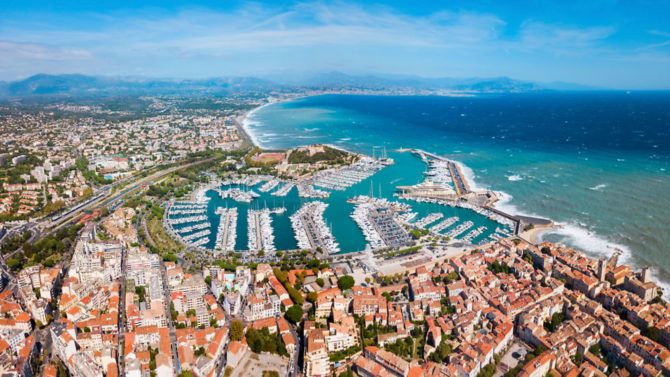 In honour of our favourite Bond, the late Sean Connery, we go property hunting in some of the film locations immortalised by the spy who loved France

James Bond never enjoyed a single happy day in Paris, according to the novelist who created him. The fictional spy believed “the tourists ripped the heart out of the city”, wrote Ian Flemming.

That may be so but, of course, you don’t actually have to be a tourist in the City of Light. With a little help from an agent – of the real estate rather than MI6 variety – you could always move to the French capital. Then again, why not seek out a home in one of the other French locations where Bond films are set? Get inspiration from cinema’s best-loved secret agent tody – and then buy another day!

You only live Oise

It’s doubtful that 007 would truly have had a terrible time at Paris’s most luxurious and literary restaurants. After all, his haunts included the Café de la Paix, once frequented by Oscar Wilde, Le Grand Vefour (which was a favourite of literary villain Marquis de Sade) and even Le Jules Verne atop the Eiffel Tower, named after the author of Twenty Thousand Leagues under the Sea. However, the latter was where, in the 1985 movie A View to a Kill, Bond saw a detective being dramatically assassinated. No wonder he has negative memories of Paris.

The plot of A View to a Kill swiftly moves north of the capital to the countryside around the Oise valley. At the Château de Chantilly and surrounding stables, Bond attends a horse sale, though his true agenda is to uncover the secret laboratory of the owner, who is chipping racehorses with performance-enhancing adrenalin devices. Perilously, he’s outed as an agent there, dicing with death at the hands of his assassin rival – not that anyone would really associate such drama with Chantilly, or the surrounding Oise valley. The château, racecourse and Museum of the Horse, where scenes were filmed, are havens of tranquillity.

It’s possible in the Val d’Oise department (which includes parts of both the Oise and Seine valleys) to reside amid tranquil forests and crisp refreshing air, and yet still be within commuting or daytripping distance of Paris. Country retreats here boast easy proximity to both urban shops and rural orchards.

One hotspot on the eastern edge of the Vexin Français regional park is Auvers-sur-Oise, the burial place of Vincent van Gogh. It’s also home to an absinthe museum documenting how the painter chopped off his ear in a hallucinogenic rage, and a château dedicated to Impressionist art.

For better-value properties in the Val d’Oise department, consider the western reaches of the Vexin Français regional park and places such as Vétheuil, a pretty village on the River Seine. The Impressionist painter Claude Monet once lived in this ‘best-kept secret’ location, where he painted numerous scenes, though he is more strongly associated with Giverny, a little way downstream in Normandy.

Prospective settlers could even make like Monet themselves and buy their own houseboat, like the floating art studio he had for sailing languidly down the Seine. Despite the semi-rural setting, with poppies blooming brightly in the fields and everything from hiking trails to horse-riding virtually on the doorstep, Vétheuil is still only an hour away from Paris.

Between Vétheuil and Giverny, also on the Seine, is the hugely underrated village of La Roche-Guyon. Officially on France’s Plus Beaux Villages list, it is nestled below picturesque cliffs, hides historic cave dwellings and boasts a fortified château. With plentiful museums and art galleries, the Val d’Oise department is rich in culture, so perhaps, like Bond, you should keep expensive Paris at arm’s length and instead explore this more affordable area north of the city.

Some 80km west of Paris in the Eure-et-Loir department is the town of Dreux, a filming location in the 1965 Bond film Thunderball. Movie buffs might recognise the Château d’Anet – former home of Henri II’s mistress, Diane de Poitiers – as the place where Sean Connery’s 007 attends the funeral of a Spectre agent.

It may have royal history, but Joanna Leggett, of nationwide estate agency Leggett Immobilier, insists: “You certainly don’t need to win the Thunderball national lottery to move to this department. At €1,679 per square metre there is plenty of scope.” She adds that keen golfer Connery would no doubt love the Château de Maintenon course, just a 30-minute drive from Dreux.

Modest farmhouses as well as cheap and cheerful yet charming thatched cottages predominate in this department, so for those seeking simple living without sacrificing proximity to Paris, it’s perfect. Eure-et-Loir boasts a thriving cosmetics industry and is a leader in renewable energy, providing potential job opportunities. Meanwhile for local daytrips, Chartres delights with its glorious 13th-century Gothic cathedral.

It is best known for Disneyland Paris, but the Seine-et-Marne department hugging the eastern and southern edges of Paris is also home to Château de Vaux-le-Vicomte which featured in Moonraker. This part of suburban Paris is ideal for children and outdoorsy types thanks to the walking opportunities of the forests of Fontainebleau and, of course, the Disneyland theme park. There is a great gastronomy scene too, with mouth-watering Brie cheese, Meaux mustard and cider all produced in the vicinity.

“Like Roger Moore in his Aston Martin, you could be driving up the Champs Elysées within an hour of leaving the Château de Vaux-le-Vicomte,” says Joanna Leggett of Leggett Immobilier. “The fact that you only need to pay an average of €2,567 per m2 (compared to €14,344 on the Champs Elysées) seals the deal.”

Theres nothing like an action-packed ski sequence to leave Bond fans stirred if not shaken, so for a dramatic change in tone, let’s now head to the French Alps.

Argentière in Chamonix is known locally as the ‘Bond village’, because Pierce Brosnan (or rather his stunt double) was filmed skiing over the local glacier in the World Is Not Enough, while being shot at, obviously!

At the foot of Mont Blanc, Chamonix is France’s winter sports capital but also hosts a huge number of summer visitors, who come to enjoy hiking, biking and a spectacular ride on one of the world’s largest cable cars over France’s biggest glacier.

“Chamonix is one of the most popular resorts in the Alps for overseas buyers,” confirms Tim Swannie of luxury property search specialists Home Hunts. “It has a very strong rental market which attracts a lot of investors as well as those looking for holiday homes. It is also within a short distance of Geneva airport and Italy, which is a real plus. Chamonix offers an active lifestyle all year round and the chance to be part of a thriving international, cosmopolitan community.”

He points to the stunning location at the foot of France’s highest mountain as a huge draw, as well as a ski terrain that appeals to beginners and experts alike. Either way, who could possibly fail to be tempted by the traffic-free town centre and its excellent restaurants and après-ski scene, which guarantee a pleasurable lifestyle both on and off the slopes?

We’ve saved one of the best locations until last – the glamorous and glitzy Riviera. Do you yearn to go speeding down the corniches in a supercar just like Brosnan’s Bond did in Goldeneye? How about soaking up the Mediterranean sunshine in Villefranche-sur-Mer, as Connery’s 007 did in Never Say Never Again? Just don’t strangle anyone with their bikini as Bond did in the opening scenes of Diamonds are Forever, filmed on the Cap d’Antibes.

“The Riviera offers something for everyone,” says Tim Swannie. “Whether you are looking for the glitz and glamour of Cannes, St-Tropez or Monaco or you want the more sedate way of life of the many villages in the back country, wherever you are you have the sea and the mountains within easy reach. There are not many places in the world where you can have breakfast on the ski slopes and lunch on the beach.”

Indeed, a fast-paced thrill-seeker could fit a beach, an Alpine lake, a Bond-style high-altitude road trip and top city shopping and nightlife all into a single day. That’s not forgetting the Monte Carlo casino Bond favoured – always an iconic landmark and right next door to mainland France. Indeed, the opening scenes of the very first Bond film Dr No are set in the casino, even if they were actually filmed at Pinewood Studios in London.

The Riviera’s perfect placement of lakes, mountains, city and ocean, all within easy distance of each other, has commanded understandably steep prices. Even Connery himself once had a pad here, which is now on the market with Home Hunts for a jaw-dropping €30m. Yet there are also plenty of smaller villages or inland locales for those who don’t have the financial resources of Auric Goldfinger – and who does! Check out peaceful Peymeinade or Théoule-sur-Mer, for example. The former is merely 15 minutes from the perfume capital of Grasse yet still offers very attractive prices. Speak to a specialist like Tim who could give you more than 007 reasons why owning here is a good idea.

Investment potential is huge, with so many keen on renting holiday apartments in one of Europe’s most sought-after coastal stretches. The Riviera’s proximity to the Italian border is optimal for balmy weather even out of season, making it an auspicious setting for year-round holiday lets.

Overall, whether you’re seeking an action-packed life in the Alps, a rural retreat on the edge of Paris or the glitz and glamour of the French Riviera, there’ll always be a French property out there to suit your needs and budget.

When the new Bond film was titled No Time To Die, unsuspecting producers could scarcely have imagined that a pandemic was about to grip the globe. This autumn viewers will finally get the premiere that they were promised – and what better timing to start a Bond-themed property search of your own? It’s been a tough year, but the sky didn’t fall, and the French property market is still welcoming British Francophiles with open arms – which should give us all a quantum of solace.