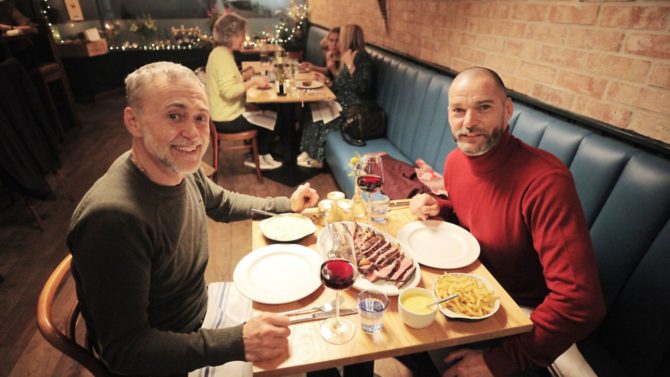 In the latest episode of BBC Two’s Remarkable Places to Eat, two Michelin star chef Michel Roux Jr takes French maître d’ Fred Sirieix to Bristol to introduce him to one of his favourite French restaurants.

Little French is an independent, family-owned restaurant in Westbury Park with a daily changing menu cooked by chef Freddy Bird. Bristol-born Freddy trained at Ballymaloe Cookery School before starting his career in London, working at two Michelin star restaurant The Square with Philip Howard, who also runs Union restaurant in Montalbert in the French Alps.

Freddy joined Moro in London for four years before returning to the West Country to launch a restaurant at Bristol Lido and opened Little French, his first solo venture, in 2019 which serves unpretentious French food and bar snacks with dishes including lamb chops with rosemary salt, oysters with shallot vinegar and fried Basque peppers.

“This is a great place,” Fred says on the show. “It really feels like a bistro, because a bistro in France, it’s about home from home. You go there all time, it’s friendly, nothing is too much.”

Michel agrees: “For me a bistro is like the equivalent of a village pub and it’s a social hub, it becomes part of the fabric of the neighbourhood.”

Fred, who is the general manager at Galvin at Windows restaurant in London, and Michel, who runs Le Gavroche, ordered the “delicious” roast queen scallops with Sauternes butter and chives; “amazing” milk-fed lamb sweetbreads with Madeira wine and clams with sausage, beans and white wine to start, followed by a “perfectly-cooked” côte de boeuf with frites and bearnaise to share and aligot, a potato and cheese mash from the Auvergne region of France.

Michel said: “The aligot is extraordinary. Any chef worth his pinch of salt in France, classically trained, would never dream of making an aligot like this, they would always use tome fraîche, fresh cheese which is much milder and you can’t get that cheesy richness.”

Freddy, who appeared with Michel on the Channel 4 TV show Hidden Restaurants, invited him into the kitchen at Little French to share just how he makes his aligot so delicious and indulgent.

Freddy revealed: “You need a good potato, so I’ll go with anything fluffy, so Maris, Edward – you want something that’s going to be dry and fluffy, nothing waxy because you want a really smooth, lovely puree potato.”

Once the potato is put through a ricer and while it is still hot, Freddy adds a splash of double cream followed by butter. He then adds about a third of a clove of garlic and the mixture is whisked until all the ingredients have melted and more cream or butter is added to get the right consistency.

Traditionally aligot, which was served to pilgrims by monks in the 12th century as a meal in itself, is made using a hard curd called tome fraîche but to give the dish a richer taste, Freddy also adds Gruyère and Beaufort, two strong French mountain cheeses.

“I think your aligot has just got that little bit extra tang to it and that comes from the choice of the cheese,” Michel observes.

“The texture’s amazing. That has got to be the world’s best mashed potato.”

For dessert, Michel and Fred enjoyed a “very good” classic chocolate mousse with the final bill coming to £130 for three “incredible” courses and a bottle of wine.

“I can’t believe this place,” Fred concluded. “I mean we are here in Bristol and this restaurant is so authentic, so genuine, so good.”

Freddy’s wife Nessa, who runs the front of house, grew up in Vosges and the couple usually spend several weeks a year in France.

“We opened Little French because I wanted old school French cooking that I ate at home but I couldn’t eat out,” Freddy explained.

“It’s the stuff I’m passionate about and I love and that’s what this place is about.”

Catch up with Remarkable Places to Eat on BBC iPlayer.