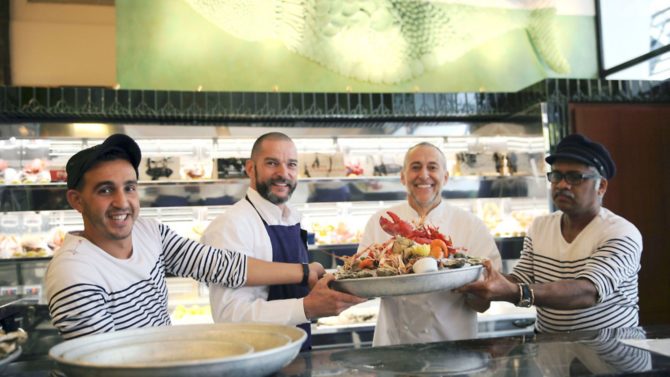 La Coupole was established in 1927 and immediately became popular with the likes of Picasso, Sarthe and Hemingway.

It’s the biggest brasserie dining room in Paris, seating 300 and another 100 on the terrace. It aims to be ‘everything to everyone’, Fred Sirieix tells viewers, with a vast array of dishes served from morning until midnight. With service running non-stop throughout the day, waiters can reset the tables up to eight times. There are 30 main dishes on La Coupole’s large menu from lamb curry to beef tartare and lobster ravioli. The two-course set menu is €19.50 while their most expensive seafood platter, Le plateau royal, is €89 a head.

La Coupole is famous for its seafood platters. There is a whole counter dedicated to them in full view of the dining room. The six varieties start at €29 a head for a tasting platter of oysters. The mid-range plateau Coupole, at €45 each, consists of a stunning display of cockles, clams, whelks, prawns and six oysters.

Michel Roux Jr says on the show: “This is what the grand brasseries are all about for me.

“Yes, the food is good, but it’s not all about the food, it’s about the heritage, the history, the conviviality of this place.

La Tour D’Argent first opened as an inn in 1582 and has been the place to indulge in French fine dining ever since.

It’s been in the same family since 1911 and was moved to the top floor of its spectacular landmark building in 1936 to make the most of its position overlooking Notre-Dame.

“If you come to La Tour D’Argent, you’ve got to have the duck,” Fred said. The roast duck, Caneton Fréderic Delair, costs €130 per person for two courses and is one of the most celebrated dishes in France. It has been on the menu since 1890 and attracts diners from all over the world. It is famously prepared at the table – once it has been carved, the juices are then extracted using a silver press. The rich sauce, laced with Cognac and Madeira wine, is then poured over the duck breast.

“It makes it really special and connects the front of house to the kitchen,” Michel observed.

As a memento of the great occasion, every customer receives a certificate. An impressive 3,500 diners ate here last year, many of whom came for the wine as well as the food. The wine list at La Tour D’Argent contains some of the most treasured vintages in the world.

Frustrated by a lack of good traditional sandwiches in the French capital, friends Stéphane Pinloche and Rodolphe Constans-Gavarry quit their day jobs as bankers and set out to produce the best jambon-beurre in Paris.

Everything at their sandwich shop, Le Jambon Beurre, in the city’s 1st arrondissement just a few blocks from the Louvre, is made to order including the classic ham and butter staple, alongside Stéphane’s own variations, as well as salads and desserts.

A traditional jambon-beurre is simply made with salted butter, ham and gherkins, but you can also try Le Pimenté made with butter infused with Piment d’Espelette and chopped chives.

The pair’s secret is in sourcing the best products, including baguettes from Gosselin, the same bakery which supplies the Élysée Palace and the French President, Bordier butter and artisanal ham by Doumbéa. Their large baguette sandwiches cost around €5.90.

Michel said: “I just love the smell of this bread, for me it just brings back so many good memories.”

Fred adds: “You know what I love about these guys? They are reinventing tradition, a tradition that is being completely lost now.”

In France three million jambon-beurre are sold every day, but in 2017, for the first time, it was outsold by the burger, according to the show.

Stéphane and Rodolphe hope to readdress this balance by championing the “best jambon-beurre in Paris”.

Remarkable Places to Eat is on BBC Two on Wednesday night at 9pm. Catch up with the series so far on iPlayer.

Hélène Darroze at The Connaught moves from Mayfair to Provence