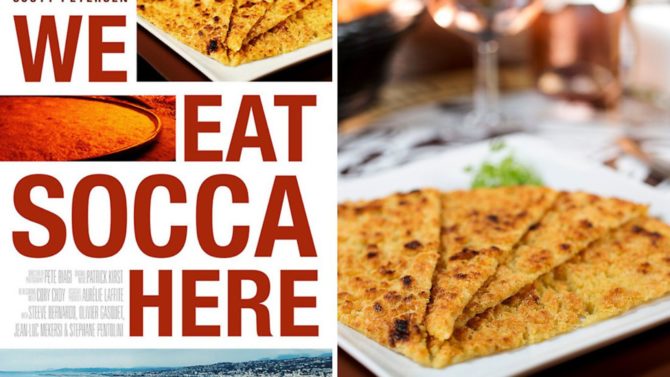 Socca is the snack of choice in Nice and along the French Riviera but there’s a lot more to it than that. We Eat Socca Here, a new documentary coming soon to Amazon Prime explores the story of socca, a cross between a flatbread and a savoury pancake that has become a mainstay of Niçois cuisine. Made from just chickpea flour, salt, water and olive oil, socca’s ingredients might be simple but its history and cultural significance is anything but, as the nine-minute short film explains. Producer Scott Petersen, an Emmy-winning documentary filmmaker based in Los Angeles, interviews local restaurateurs and entrepreneurs who are proud to keep the wood-fired flames of Nice’s socca ovens burning on the French Riviera.

We asked Scott for the story behind We Eat Socca Here and his time on the French Riviera.

What inspired you to make this documentary?

I love to travel and one thing I do when I travel is sample the local specialities. I gravitate towards the items that I cannot get at home, whether it’s a main dish, fruit, chocolate or wine. As I was preparing and researching for my trip to Nice, I saw that socca was mentioned quite a bit. I had never heard of it before. I tried it at a few places in Nice and it was so good! I saw them making it in these really old wood-fired ovens and thought that there must be a story behind it. I like the idea of food made with only a few ingredients, but done really well. So, I did a bit more research and came back the next year accompanied by my cameraman buddy and talked to the wonderful folks at Chez Pipo, René Socca, Chez Thérésa, and a guy who makes beer from chickpeas. I love how food is intertwined with history, politics, geography, and culture. It tells a fascinating story.

How much time did you spend in Nice and how long did it take to make the documentary?

I’ve been to Nice twice, each time for a week or so. My cameraman only had three or four days in Nice, so we were limited to that in terms of shooting. My French language skills are only ok, so upon returning home I had to get all the interviews translated to English and then create the subtitles. Since it’s a short film, it really only took a few months to edit. I had planned to go to Nice and have a screening, but the pandemic curtailed that idea.

How much socca did you eat while you were there?

Ha, I ate a lot of socca! However, I felt it was my duty to try other restaurants as well.

Do you spend much time in France?

Prior to the pandemic, I would usually go to France once a year. I’ve visited several regions and enjoyed them all, but the Côte d’Azur is a particularly special place. The weather is similar to where I live in Southern California, but the sea is much bluer and you can get a perfect croissant for a euro just around the corner! Hopefully, I’ll be able to book a flight soon.

Are there any other French food specialities you’d be keen to explore in the future?

I’m always happy to try the regional wine and spirits when in France. There’s a wine region near Nice called Bellet. Unfortunately, as opposed to wines from Bordeaux or Burgundy, it’s relatively difficult to buy Bellet wines in the US. I guess I’ll just have to return to Nice to try it. One thing I love about France is the availability of great chocolate. You can’t walk more than a few blocks in Paris without passing a shop that sells wonderful single-origin chocolate. I can certainly find single-origin chocolate here (forget Hershey’s!), but I have to make a special trip to purchase it.

We Eat Socca Here is available to rent and buy on Amazon Prime from 30 March.

Quiz: can you match these tasty French dishes to the area they’re traditionally associated with?

Nice is the best French city for expats