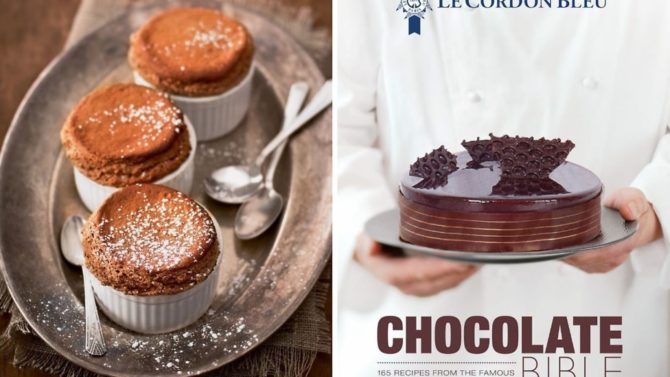 Founded in Paris in 1895, Le Cordon Bleu is the world’s leading network of institutes for culinary arts.

Its chef instructors are winners of major national and international competitions, eager to share their passion and pass on their knowledge to students from around the world.

For the chocolate soufflé

Preheat the oven to 180°C (350°F). Brush six 8cm ramekins with butter and dust evenly with caster sugar, tipping out the excess.

Chocolate Soufflé: Finely chop the chocolate and place in a bowl. Put the cocoa powder and water into a saucepan, stir to combine and bring to the boil. Pour the hot mixture over the chocolate, stirring until smooth; set aside until cool. Blend in the egg yolk, then the cornflour.

Whisk 1⁄3 of the egg whites into the chocolate mixture to lighten it. Use a spatula and carefully fold in the remainder in two separate batches. Divide the mixture evenly between the ramekins; smooth the surface with the spatula. Run the thumb around the tops of the ramekins to open a narrow (5mm) channel between the mixture and the rim. (This will allow the soufflés to rise cleanly and evenly.)

Cook for 15 minutes, or until risen. As soon as the soufflés come out of the oven, dust with sifted icing sugar; serve immediately.