What’s inside the February 2022 issue of FRANCE Magazine UK? 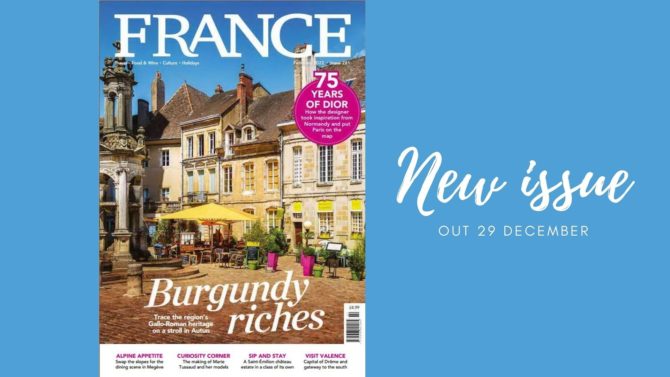 As winter engulfs France’s ski resorts in a blanket of snow, we head to the Alps in our new issue for some exercise and indulgence off the pistes.

Yogis had better head to Les Menuires and La Clusaz to experience the some of the best high-altitude yoga festivals in Europe, while foodies should make a beeline to Megève for a taste of the finest mountain gastronomy France has to offer.
From the Alps to Armenia – did you know about France’s Armenian heritage? First we visit Valence, which has one of France’s largest populations of Armenian people, then we take a deep dive into the long-standing connections between the two countries in our History Trail.
Elsewhere, we celebrate 75 years of Dior, visit a social housing complex with a story to share in Northern France, and explore a gorgeous château in Saint-Émilion.

We love to hear from readers, so let us know which articles from our February issue you enjoyed reading. And if there’s something French, or somewhere in France, you’d like to see covered in the magazine, we’re all ears!
In the meantime, here’s a taster of what you can expect…

Stretch your limits at an Alpine yoga festival

“Imagine. You are walking along a path. It is covered in snow. The sky is blue and all you can hear are birds tweeting. You look down. The snow is glistening in the morning light and you hear the crunch of the snow under your boots. You turn and notice a stream running past you. And further ahead there is a waterfall. You breathe in and smell the sweet clean air and stretch your arms wide and open yourself to the beauty of the mountains. This isn’t a headspace app. This is a small part of what you experience on a yoga week in the friendliest French resort of Les Menuires,  part of Les Trois Vallées which is the largest ski area in the world. I also got sun burn doing a sun salutation, but that was unintentional.”

Read more from Sarah Tucker in the February 2022 issue of FRANCE Magazine UK.

Meet the woman behind the waxworks

“The paradox of Marie Tussaud is that during her long life, this savvy French businesswoman was celebrated for the verisimilitude of her wax portraiture while the facts and truths of her own story remain cloudy and uncertain. Through her craft, Marie Tussaud became the intimate of both royalty and revolutionaries, immortalising their appearance while society around them unravelled. She accomplished this with precision, her works described as “an illustrated supplement to the news of the day” (Kate Berridge) and Tussaud herself as a “journalist in wax” (Pauline Chapman). The colourful anecdotes described in her memoirs are difficult to substantiate, but the dangerous times in which she lived perhaps encouraged a certain degree of self-invention. It is also curious that one of France’s greatest exports, operating in 21 cities across the world, has no Madame Tussauds of its own.”

Read more from Deborah Nash in the February 2022 issue of FRANCE Magazine UK.

“This pandemic has proved to me that I may be slightly out of step with nature. The virus causes many of its victims to lose their ability to smell and taste, but I have found that my senses have become heightened.

This is largely because so far (touch every object made of wood within 10 yards) I have stayed free of infection. But it’s also thanks to the way Parisian life has changed over the past couple of years.

I find that I am now much more alert when I step out of doors, on a shopping trip for example. My body and brain team up like never before.

Since free plastic bags were abolished, I have a longer pre-shopping checklist: ‘Cash, card, keys, bags …’ And now I have to add, ‘mask’. So much to remember.

You’ll notice that I didn’t say ‘shopping list’ – for a very Parisian reason. I am surrounded by supermarkets that are open 24/7. I can shop every day, wandering in and thinking, ‘What shall I eat? Hmm, fennel? Wow they have fresh scallops – I wonder if they had to fight an English battleship to get those?’”

Read more from Stephen in the February 2022 issue of FRANCE Magazine UK.

Like what you see? The February 2022 issue of FRANCE Magazine is on sale from 29 December. Take advantage of our great subscription offers and get FRANCE Magazine delivered straight to your door every month! You can also buy single issues from Mags Direct. Happy reading!

More in France in the UK, France Magazine, France Travel