A Twinning Formula: The story of twin towns Haddington and Aubigny-sur-Nère 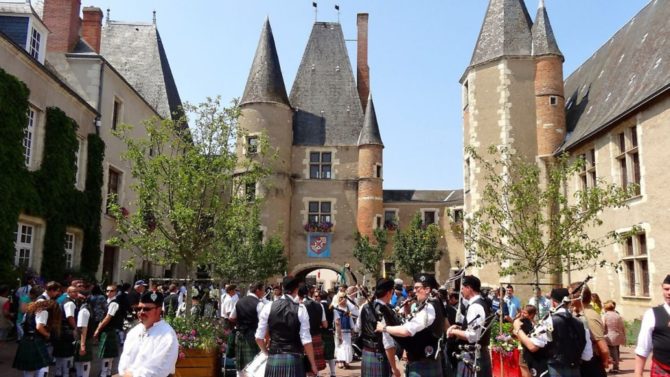 The unmistakeable opening notes of Scotland the Brave pierce the still summer air as a procession of kilted bagpipers march down the Saltire-adorned high street. It could be a scene from any Scottish town, were it not for the boulangerie, fleuriste and salon de coiffure – and the delightful weather.

This little piece of Scotland in France’s verdant heartland, around two hours’ drive south from Paris, is Aubigny-sur-Nère: the Cité des Stuarts. Its Celtic roots stem from the Auld Alliance, the 1295 pact that cemented the kingdoms of Scotland and France as allies against England.

In 1419, during the Hundred Years’ War, the future King Charles VII was trapped by the English near Bourges. A Scottish nobleman, John Stuart of Darnley, came to his rescue with a large contingent of willing soldiers and with their help, the English were defeated.

By way of thanks for their sacrifices, Stuart and his successors were given the town of Aubigny and the surrounding lands. The area remained Scottish for four centuries until it was confiscated from its neglectful caretakers, the Dukes of Richmond and Lennox, and became French once more.

Nonetheless, Aubigny and its residents are extremely proud of their Scottish heritage, so establishing a jumelage there was an obvious choice.

Lying 17 miles to the east of Edinburgh, Haddington has a historic French connection of its own. During the early 16th century, Scotland was under constant attack from the English, which ultimately led to Haddington’s capture in 1548. Mary of Guise, who was the mother of Mary, Queen of Scots, called on the French army to help them escape the clutches of the English. Soon, soldiers from l’Hexagone joined forces with the Scottish military to help. In return, Mary of Guise signed the Treaty of Haddington which saw her then-six-year-old daughter promised to the future King of France Francis II.

Haddington and Aubigny have been villes jumelées since 1965, over which time many trips back and forth across the Channel have been made and long-lasting friendships formed.

“A group from Haddington visits Aubigny every two years,” explained Elaine Mitchell, secretary of Haddington Twinning Association. “But a visit doesn’t have to be part of an organised trip – we encourage anyone passing to drop by for a visit. Visitors from Scotland are welcomed with open arms, and if you happen to be from Haddington, you’re greeted like long-lost friends.”

Isabelle Vivet-Pinson, president of Aubigny’s committee, echoed her sentiments. “The welcome in Scotland is extremely warm – almost all of us have friends there who host us and we are delighted to see each other again. It’s an immense pleasure to share their Scottish way of life for a few days.”

It’s clear from their bulging social calendar that Haddington Twinning Association equally relishes the chance to experience l’art de vivre à la française. Members enjoy pétanque evenings, French quiz nights and a Beaujolais Nouveau film night as part of an expansive activities schedule. Across the Channel in Aubigny, events include a traditional Burns Night party and, of course, the ultimate celebration of all things Scottish, but with a Gallic twist: the Fêtes Franco-Écossaises.

Over three special days in July for the past thirty years, Aubigny’s population of 5,000 swells by around 20,000 for this unique festival. Enthusiasts can buy kilts and other tartan souvenirs, watch some Highland dancing and enjoy traditional and contemporary Scottish music. Haddington Twinning Association usually times its organised biennial visit to coincide with the festivities. Aubigny has its own pipe band and every two years, Haddington’s bagpipers join them at the Fêtes for a rousing display of musical muscle.

There’s nothing quite like it anywhere else in France!

In with the new

One challenge faced by many twinning associations is how to get the next generation involved.

“It is more difficult getting young people interested – more often than not, they participate because their parents are on the committee,” said Vivet-Pinson.

But Haddington and Aubigny run a mutually beneficial exchange programme to get teenagers involved in the twinning activities. In December, sixth formers from Haddington’s Knox Academy are welcomed in Aubigny for a cultural exchange. Furthermore, a student from the school, plus a pupil from Aubigny, can win the Alice Burnett Scholarship every year, which allows them to undertake a month-long work experience placement in the other town and stay with local families to boost their knowledge of their second language. In Aubigny, the student from Haddington usually does their work placement with the council, helping to organise the Fêtes Franco-Écossaises.

Vivet Pinson added: “These exchanges are extremely enriching for both parties and they’re often a fantastic experience for the young people involved.”

In the pipeline in Haddington is a special French-themed garden in the town. At the centre of the project has been the planting of 50 Aubigny Auld Alliance irises last year, which were specially developed and cultivated by a Cher iris grower. It’s a stunning representation of the blooming Franco-Scottish relationship that has lasted centuries.

Does your town have an interesting French connection? We’d love to hear its story. Get in touch: [email protected]