Travel back in time to Le Mont-Saint-Michel 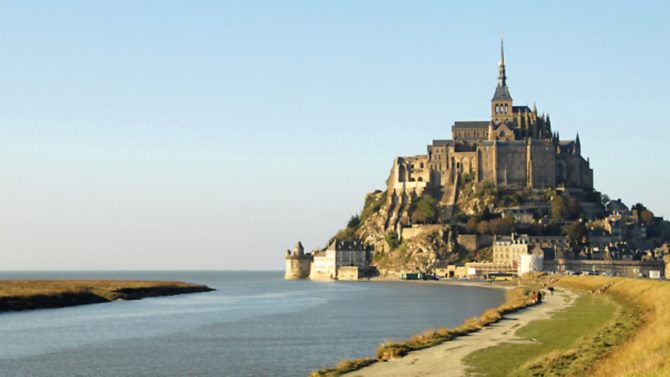 Perched on a rocky islet in a breathtaking bay where the regions of Normandy and Brittany meet, stands Le Mont-Saint-Michel. Comprising a Gothic-style Benedictine abbey and the village which grew up around it, the mount was for centuries one of Europe’s major pilgrimage sites and is now a Unesco World Heritage site.

Most visitors take the shuttle bus or walk the 2.5 kilometres from the mainland car park. However, the more adventurous have other ways to reach the island. To get a real feel for the journey taken by medieval pilgrims, remove your shoes and join a guide on a seven-kilometre walk across the sands from the village of Genêts. The walk takes about two hours, but if you want to arrive more quickly, a ride on horseback is a great way to explore the bay.

Once on the rock, you have plenty of history to take in. Wander up the winding main street, Grande Rue, past pretty medieval buildings to find the island’s star attraction, the Abbaye du Mont-Saint-Michel. This awe-inspiring structure, parts of which date from the 11th century, is best explored on a one-hour guided tour, operating regularly all year. From mid-July to the end of August (except Sundays), you can tour the abbey from 7pm to midnight, when it is lit up in an array of colours, and listen to chamber music recitals.

Clinging spectacularly to the rock at the northern edge of the abbey lies La Merveille (The Marvel). This wing features a cloister surrounded by delicately carved arches on granite pillars, grand chambers including a 13th-century dining hall, and a walking area boasting one of the finest ribbed vaulted ceilings in Europe. Another highlight is the Église Abbatiale, a mix of Norman, Romanesque and Gothic architectural styles, whose transept sits on a bed of solid rock.

You can get spectacular views of the bay by walking along the Chemin des Remparts, on the east of the mount, starting at the Tour du Nord and ending at the Porte du Roy. However, to fully appreciate the island’s breathtaking setting, you must take to the air, either in a hot-air balloon, a microlight or a gyrocopter, and look down on the abbey and the sheep grazing in the meadows on the mainland.

For more information on what to visit and details of hotels and restaurants, see www.ot-montsaintmichel.com

Eight out of ten customers would recommend Eurotunnel Le Shuttle to their friends and family. With up to 85 departures a day, it is the fastest, most frequent way to the continent by car, which means Le Mont-Saint-Michel is closer than you think. Book early and get the best fares. Visit www.eurotunnel.com or call 0970 850 8133 to book your crossing.