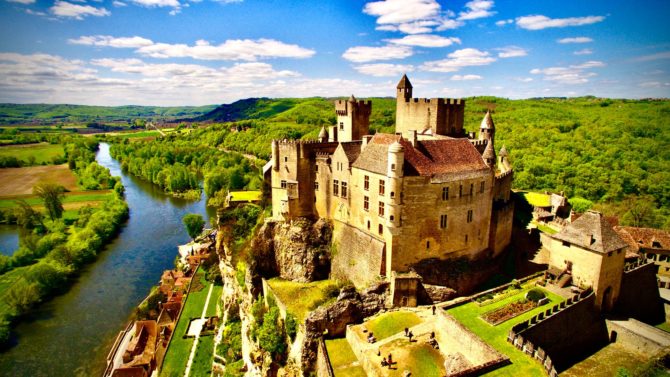 Two knights savagely duelling to the death over the honour of a raped and scorned noblewoman. A battle arranged “on God’s orders” by a psychosis-suffering teenage king. This was the turbulent scene of France’s last duel – the final fight ever to be legally sanctioned back in 1386 – and it was such a legendary moment that it has been transformed into a Hollywood film. The Last Duel, starring actors including Matt Damon and Jodie Comer, makes its cinematic debut on 15 October.

There’s no reason why Francophiles should be content with seeing the action on screen though – why not retrace the twists and turns of the real-life story in Paris, followed by a road-trip through the Dordogne Valley to tick off the re-enactment locations where the film took shape?

The history behind The Last Duel
The story began when Marguerite de Thibouville, daughter of a wealthy squire, received a visit from her husband Jean de Carrouges’ former friend, Jacques Le Gris. Forcefully bursting his way into her château, he allegedly propositioned her into prostitution, claiming to be able to solve her husband’s financial troubles. When she indignantly refused, he raped her, enlisting a fellow knight to hold her down, and threatened to murder her if she sought justice.

How Marguerite was initially treated in court is a fascinating, if damning, insight into the patriarchal, anti-feminist society of France in the Middle Ages. The judge, Count Pierre, instantly wrote off her testimony as the hysterical fantasy of a guilt-ridden woman – someone desperately waging war on her subconscious desires for an illicit love interest. Either that, he challenged, or the delusional Marguerite “must have dreamed it”. Case dismissed! It would be unthinkable to be treated this way in the modern ‘MeToo’ era.

However, the couple also had another reason to expect prejudice – five years earlier, Carrouges had unsuccessfully demanded that the same judge should surrender land once owned by his wife’s family, so that he could claim it as part of his wedding dowry. Yet the count had already lawfully purchased the land, so refused to hand it over. Le Gris had played the role of adviser to the count in the legal disputes, so there was now bad blood between the former friends. Had the couple fabricated the rape claim to get their revenge?

Either way, the count’s frosty attitude had been inevitable, so Carrouges leapt onto his horse and cantered to Château de Vincennes on the outskirts of Paris instead. There he would demand an audience with King Charles VI. Charles was already infamous for his unstable thinking – a few years later he would forget his name and prove incapable of recognising his wife. Yet he could override the count’s ruling. Although only parts of the original château remain today, the towering royal fort is still evocative of the location that Carrouges would have galloped towards to seek justice, his face red with rage. Back then, it was also a hunting lodge and would have been surrounded by vast swathes of forest well-stocked with game, though for similar surroundings today, visitors would have to venture as far as the Loire Valley. Vincennes once even imprisoned villainous Marquis de Sade in the same keep that had been onsite during Carrouges’ visit.

Barely 10km away lies Paris’ Palais de Justice, where the King arranged a second trial. Boasting a picturesque riverside location on the Île de la Cité, it still operates as a working courthouse today. While visitors might not want to witness legal battles en français, the Conciergerie also housed here is a must-see – the prison-turned-museum where Marie Antoinette once languished while awaiting execution. Le Gris, who had given up his right to a safe church trial, accepted his equally grisly fate – a duel to the death, with God deciding the innocent party by sparing his life.

The fight’s location was the Abbaye de Saint-Martin-des-Champs. (It no longer exists today, and the Musée des Arts et Métiers stands in its place). This former monastery had been transformed into a gladiatorial-style arena, with thousands of spectators attending, and there was even a royal box for the King and his uncles.
Although he successfully plunged his knife through the spine of his opponent’s horse, it was Le Gris who received the final blow – a fatal slash to the throat. His last words? “In the name of God and on the peril and damnation of my soul, I am innocent of the crime.”

The final stop on the trail of the last duel in Paris is the Gibbet of Montfaucon, the location where the executioner dragged the suspected rapist’s body after death. It was located just outside the city walls, surrounded by a leper colony, slums, accommodation for sex workers and various other “undesirable” places that the King wished to annex outside the city.

Nowadays the spot merely houses an innocuous-looking garage at 53 rue de la Grange aux Belles, but Parisians in the know claim that it’s haunted and that in the dead of night the rattling of chains can be heard, alongside the bloodcurdling screams of victims whose remains still lie beneath the ground.

The Last Duel filming locations in the Dordogne Valley

Now let’s leave the streets of Paris behind and travel several hours south to the heart of the Dordogne Valley. Director Ridley Scott chose this region for filming as it evoked an authentic medieval atmosphere.

Although the real-life battle took place in Paris, it would have been impossible to recreate the era in the bustling, modern-day capital city, whereas the sleepy villages of Dordogne and their perfectly preserved medieval aesthetics fit the bill perfectly.

Scott already had a favourite filming location in the region, the ancient market town of Sarlat-la-Canéda, which he experienced while shooting former film The Duellists. His return to Sarlat saw the film cast visit a legendary twice-weekly market which has operated continuously since before the last duel ever took place. Guests can follow in the footsteps of Jodie Comer, who played traumatised bride Marguerite, and sample some of the duck and goose products that were staples of the era. Not only can foodies feast on foie gras, they can also enjoy walnuts – a delicacy so valuable that in Comer’s character’s day, it was even used as a currency and could legally form part payment towards property. Saturday is the best day to witness the food market in full swing, although a scaled-down version takes place on Wednesdays and there is an additional night market on Thursdays.

Filming The Last Duel in Sarlat-la-Canéda
During their time in Sarlat, the cast and crew privatised the Plaza Madeleine hotel, within two minutes’ walk of both the market and 13th-century château Manoir de Gisson. Guests can enter the château via the Place du Marché aux Oies (Goose Market Square), with its statue of a trio of geese symbolising Sarlat’s importance as an historical trading post for the delicacy. Once inside, visitors can ponder the fate of Le Gris and men like him while browsing exhibits on justice from the Middle Ages onwards, including displays of medieval weapons and instruments of torture.

Meanwhile, although the cast craved mod cons at Plaza Madeleine after long days of swinging their swords on horseback in the medieval streets, an alternative characterful hotel for those seeking full cultural immersion would be the boutique La Maison des Peyrat, an ivy-smothered stone farmhouse packed full of period features atop a hill surrounded by walnut groves. Located 10 minutes from the town centre, it boasts a more rural, intimate and above all ancient feel, with traditional French timber-beamed ceilings, historic fireplaces and even brick wall interiors in some rooms.
Intriguingly, in the days when Le Gris and Carrouges were teenagers, the house was a hospital used to treat plague victims during the Black Death.

Back in town, Matt Damon, who played Carrouges in the film and co-wrote its script, enjoyed truffle dishes at La Couleuvrine, an authentic medieval dining experience. Meanwhile Adam Driver, who played arch rival Le Gris, used his downtime to visit the Lascaux Caves. Doubtless the top attraction in the valley, just a 30-minute drive from Sarlat, it presents an unrivalled collection of 20,000-year-old prehistoric rock art. The replica, Lascaux IV, has a minimalist modern setting, but in stark contrast, the cave museum’s interior displays 1,900 painstakingly recreated paintings which took 25 skilled artists two years to produce.

Monpazier in The Last Duel
Even for those who have already seen this main attraction, the Valley has much more to offer besides, and it’s always worth a return visit to retrace the steps of the actors who created Hollywood sur Dordogne! Other filming locations include the lesser-known village of Monpazier, a 13th-century bastide named in honour of English King Edward I. Its Thursday morning market has existed for over seven centuries. Scott found this location so beguiling that the presence of a little Renaissance architecture didn’t deter him, instead he employed a team of local artisans to rebuild wooden doors and balconies in a more era-appropriate style. Medieval-style windows were constructed and simply installed over the top of existing ones. Not much needed to be changed as the market square has remained almost identical to 600 years ago, with original weigh scales still intact. During filming, the tiny village square was swamped by hundreds of extras in scenes that saw crew and cast numbers exceed that of Monpazier’s entire population, although guests today are likely to find a far more peaceful ambience.

Elsewhere in Dordogne is Château de Fenelon, which is no stranger to big-budget Hollywood films having previously hosted Drew Barrymore in the 1998 Cinderella remake Ever After. Scott positioned this imposing fortress in a rather more bleak setting – a military camp. The triple-walled château wasn’t an idyllic fairy tale in real life either, having once played a strategic role in the bloodthirsty Hundred Years’ War.

Beynac-et-Cazenac in The Last Duel
Scott also chose the photogenic riverside village of Beynac-et-Cazenac and the church here was the setting for Carrouges’ wedding. Beynac has attracted the attention of multiple filmmakers in the past, perhaps most memorably in Luc Besson’s Joan of Arc, while more recently many major Last Duel scenes were captured here too, including in the 12th-century château which dominates the landscape.

Travellers here will delight in gliding over the water in traditional flat-bottomed boats known as gabarres, taking a hot air balloon ride over the medieval landscape, or simply strolling through the streets. Scott had sought to relive the drama of a cliff-hanger tale by choosing an equally dramatic location to match, and Dordogne didn’t disappoint.
From Sarlat, which boasts more official Historic Monuments than any other medieval town in France, to the small villages that pop up throughout the film, the region is heavily featured on screen.

There’s a surprise change of scenery for the fast-paced duel itself, which takes place at the Abbaye de Fontfroide, a Cistercian monastery skirting the Spanish border 15 kilometres from Narbonne in Occitanie. A recreation of the original abbey, set amid pine trees and terraced gardens, it is a fitting interlude to the idyllic Dordogne landscapes. Eagle-eyed visitors may also catch a quick glimpse of Burgundy, but, for the best truly authentic medieval scenery, it’s a Dordogne excursion that beckons.

The Last Duel is in cinemas from 15 October.

Previous Article Travelling to France: Which airlines fly to French airports
Next Article Book Competition: Win a copy of Fresh Water for Flowers by Valérie Perrin