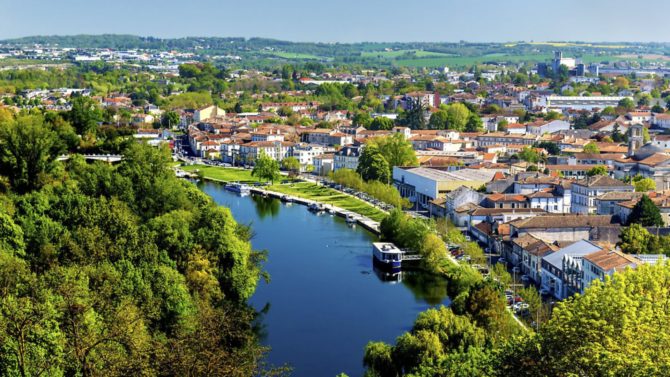 Jump in the car and discover the Charente department in western France with our three-day road trip itinerary which takes you through Cognac, Jarnac, Angoulême and Aubeterre-sur-Dronne

Begin your journey around Charente in the town of Cognac – capital of the world’s most famous brandy. Pitch at Camping de Cognac (open April to September, pitches from €5), a charming little site surrounded by woodland and close to the River Charente. It is an easy stroll to the old town’s maze of echoing alleys hedged with elegant Renaissance homes blackened by the sooty tears of brandy mould.

A recent invention compared to wine, cognac evolved in the 17th century when kegs of wine that were being transported along choppy rivers and seas to France’s northern towns, turned to vinegar. To get round the problem, canny producers hit on the idea of distilling the wine.

Find out more about the drink described by the novelist Victor Hugo as ‘la liqueur des dieux’ by taking a tour on the cognac house Rémy Martin’s vineyard train. Other cellars include the Château de Valois, once a residence of François I and now home of the Otard cognac distillery.

Near the cobbled quay stands the Espace Découverte, where you can find out more about the flat-bottomed boats, called gabarres, that once transported cognac along the French waterways. After the visit, step aboard the refurbished gabarre La Dame Jeanne, which is anchored outside the exhibition space, and enjoy a lazy two-hour trip along the river that François escribed as “the most beautiful in my kingdom”.

Following the river, drive to Jarnac, where François Mitterrand, France’s longest-serving President, was born in 1916. After his death in 1996, many gifts he had received during his 14 years in office were bequeathed to the Donation François Mitterrand. After seeing the museum’s eclectic collection of artefacts ranging from African sculptures to ornate ashtrays, stroll through cobbled streets to the Grands Maisons cemetery to see Mitterrand’s surprisingly unfussy tomb. Get back in the car and continue your journey to Angoulême.

Have dinner at: Indulge in some stylish home-cooked delights at the Restaurant du Château (menus from €20) before continuing the journey to Angoulême.

Stay the night at: Pitch just outside town at Le Camping du Plan d’Eau in Saint-Yrieix-sur-Charente, just outside Angoulême (open April to October, pitches from €7.50).

In the morning, wander Angoulême’s steep cobbled streets packed with chic shops and gourmet restaurants, before visiting the museum dedicated to the bande dessinée, or comic strips. Angoulême is classed as a ville d’art et d’histoire, so find time to visit the 19th-century market place and the ornate cathedral.

After lunch, walk off the calories with a stroll along the medieval ramparts to Place Beaulieu for views over the red-roofed city, which was first settled by the Romans. The narrow streets are the setting for one of France’s most spectacular vintage car events, the Circuit des Remparts, which is staged over several days in September. Vintage and classic cars take part in parades and displays, culminating in a heart-stopping race through the streets.

Buy some of the local speciality, daisy-shaped, orange-flavoured, Marguerite chocolates, at the Letuffe factory in Trois Palis, then follow the D13 to Lac de Lavaud.

Created in 1989, this 140-hectare lake has several beaches with campsites where you can pitch beneath the trees and watch storks flap across the mirror-calm waters. In the nearby town of Roumazières-Loubert, take the vélo-rail from the train station and pedal along tracks through the forest to the banks of the River Vienne.

Stop for lunch at: the bistro Le St. André (menus from €12.90), which is on a pretty paved alley in the old town. Local specialities include snails in a creamy cognac-based sauce and flognarde (pear clafoutis).

Have dinner at: La Grange aux Oies (menu gourmandfrom €56) – a gourmet restaurant in the grounds of the Renaissance Château de Nieuil.

Stay the night at: one of the campsites alongside the Lac de Lavaud

The drive from Lac de Lavaud to Aubeterre-sur-Dronne in the south of Charente takes about 90 minutes, during which the scenery changes dramatically. Follow the tranquil D674 and you will see forests and dark-stone houses give way to paler stone buildings and more exotic vegetation, including the occasional palm tree. At the foot of town, stop at Camping Aubeterre-sur-Dronne (open May to September, pitches from €6).

A horseshoe of honey-stone houses crowned by the ruins of a medieval castle, Aubeterre sits above a bottle-green loop of the River Dronne. Climb to the site of the crumbled fortress for panoramic views, and then visit the église souterraine of Saint-Jean, Europe’s largest troglodyte church. Inside this huge and spooky cavern carved out of the rocks in the 12th century, you will discover a fascinating collection of carved sarcophagi.

Stop for lunch at: take a table on the terrace of the Hôtel de France’s gourmet restaurant in the village square (menus from €20).

14 things you need to know about French driving etiquette