Reader Experience: How we relived 40 years of French holidays during the coronavirus lockdown 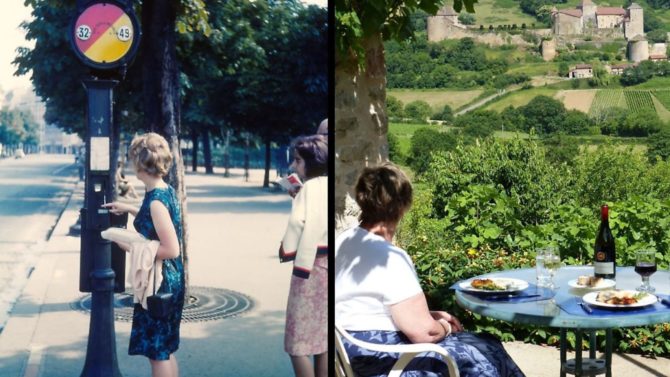 FRANCE Magazine reader Mick Bister shares how over 40 nights and almost 7,200 photos, he and his wife enjoyed a French adventure during the lockdown without leaving home

When the coronavirus lockdown in March 2020 signalled the end of any trips to France for the foreseeable future, one British couple decided to make the most of their self-isolation by digging out 40 years’ worth of photographs of holidays past and going on an adventure through l’Hexagone from the comfort of their sofa.

Mick Bister, a former French teacher and keen photographer, wrote to FRANCE Magazine to share how he and his wife, Marian, had relived years of cherished trips to France during the lockdown. Mick had captured decades of memories on slide film and it seemed like the perfect time to revisit them.

“Down came the projector from the top of the cupboard,” said Mick. “Out too came the holiday diaries that my wife had meticulously kept during each visit, and for forty consecutive nights, we relived one year at a time. We worked backwards, thereby seeing ourselves progressively (and frighteningly) getting younger.”

We’ll start at the beginning, in 1964: the couple’s first holiday to France together. Mick, had begun his teaching career and persuaded Marian that Paris was the perfect place to help her history and theology theses. From Paris it was to Tours and the Touraine, where Mick had spent six happy months during his teacher training and become enamoured with France. “After a week of sightseeing (Amboise, Villandry, Chinon, Candes-St-Martin, Loches) Marian had fallen in love with France just as I had two years earlier,” Mick said.

The couple were actively involved with school trips and the 1970s saw many a visit to France with a cohort of eager students. “If we wanted to go up the Eiffel Tower, I could park the minibus almost alongside it; how things have changed since.” Wine tastings for pupils would also be organised in Épernay and Vouvray. “For most of the pupils this was their first trip abroad and we shall never forget the joy on their faces.”

The Eighties saw trips to Oise thanks to a twinning initiative between schools in Bedfordshire and the Hauts-de-France region. Mick’s school was twinned with one in Gouvieux, and he has fond memories of his and Marian’s visits there every other year. The hospitality shown to us in Gouvieux by the school staff and the civic authorities was exceptional and we still visit friends there to this day.” Other trips included Normandy, the Loire, the Pyrenees and Roussillon.

In 1991, Mick and Marian celebrated their silver wedding in the place that had first enchanted them, the Touraine; in 1996 they were back in Tours to celebrate both their 30th anniversary and Mick’s retirement chez Jean Bardet. Today, the couple have a special love for Burgundy, where they have a favourite gîte. “It’s between Cluny and Mâcon and has an incomparable view towards the château of Berzé-le-Châtel,” said Mick. “We love the people, the calm, the scenery and of course the food and the wine.”

Mick sums up their lockdown adventure perfectly: “We revisited so many magnificent places with each slide stirring memories and emotions that had lain dormant for too long – the Auvergne and the simultaneous ringing of cow bells and church bells on a Sunday morning, the Basque country and the singing of the points scored during a pelota match, Brittany and the spray from the waves crashing on the Pointe du Raz, the town of Cognac and the fragrance of the part des anges, Normandy and our first experience of poulet vallée d’Auge, Roussillon and the spontaneous dancing of the sardane in the streets of Perpignan, Touraine and the goats at the Élevage Caprin that incessantly nibbled at our buttons and shoe laces, Burgundy and the spiritual intensity of Taizé, Provence and the conversation with the lavender grower during which my wife drove off in the car as a hint that I was talking far too much.”

What does he miss about France? “I’m afraid it is mostly food related. In Nice I personally miss the pre-breakfast walk to fetch the bread from the Temple des Pains which takes me across the Cours Saleya as the stalls are being set out. We miss going to the markets in search of goodies for lunch and seeing what the traiteurs have to offer.”

Hopefully it won’t be long before Mick and Marian can be back on the road in their favourite country!

Sea of dreams: What it’s like living in La Rochelle

Previous Article Driving in France: 8 of the best Villages Étapes
Next Article My life as an haute couture embroiderer in Paris