What is the oldest monument in Paris? 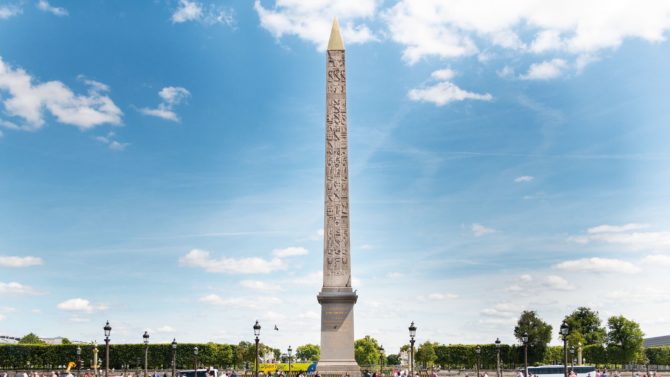 The oldest monument in Paris is being restored this year. The 23-metre-tall Egyptian granite monolith has been situated on the Place de la Concorde since 1836. Scaffolding was erected around the monument in November 2021 and the restoration process will take place over several months in 2022.

So, what is the Luxor Obelisk, and why is there an Egyptian monument in Paris?

The Luxor Obelisk (L’Obélisque de Louxor) dates from the 13th century BC and was originally part of the Luxor Temple erected by Ramses II in Egypt. The Obelisk was offered to France by the Viceroy of Egypt, Méhémet Ali, in 1830 in recognition of work that French scholar Jean-François Champollion had undertaken deciphering hieroglyphics.

From a young age, Champollin had focussed his studies on languages including ancient Eyptian, Persian, Ethiopic, Sanskrit, Zend, Pahlevi and Arabic. From 1815-1822, Champollion spent his time examining various texts brought over from Egypt, including the famous Rosetta Stone, and started to identify a relationship between hieroglyphic and non-hieroglyphic scripts. His findings were considered a huge breakthrough in language studies.

Classified as an historic monument since 1937, the obelisk is made of pink granite and weighs 222 tons. The hieroglyphics on the monolith are scenes of offerings to the glory of Ramses II. The pedestal it sits on weighs a further 240 tons and was made in France using granite from quarries in Brittany.

The restoration carried out by DRAC (Regional Directorate of Cultural Affairs) includes repair work on the gold leaf of the ‘pyramidion’, the pyramid-shaped cap on the monument, low pressure micro-sandblasting on the main body of the monolith, and sponge cleaning of the base and the engraved golden decorations.