What’s inside the April 2022 issue of FRANCE Magazine UK? 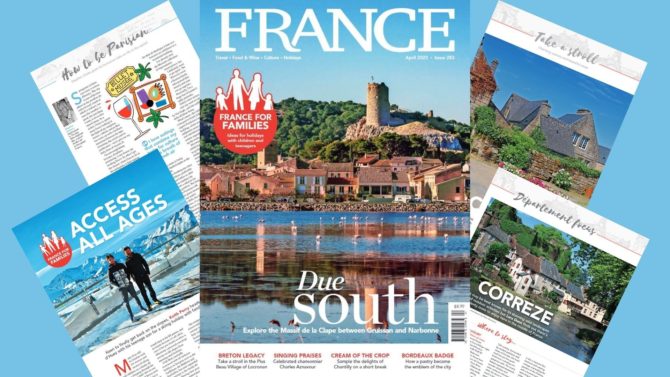 With French holidays for 2022 back on track, we thought it was time for another of our Family France specials – full of inspiration and tips for a multi-generational break. This month one writer and her family swap screens for the seaside in Hauts-de-France, while another enjoys a fun father-and-son bonding break on the slopes in the Alps. We couldn’t do a family special without mentioning Disneyland Paris, and former FRANCE Magazine Assistant Editor, Lucy Parford, shares her young family’s trip to the fantastic theme park, and more, as it celebrates its 30th anniversary.

Elsewhere, we’ve got a peaceful stroll in the Breton village of Locronan to enjoy, plus a short break in Chantilly, the town famous for its cream and castle. If you’re a fan of the Bruno: Chief of Police series, don’t miss Simon Johns’ interview with author Martin Walker in our culture section.

We love to hear from readers, so let us know which articles from our March issue you enjoyed reading. And if there’s something French, or somewhere in France, you’d like to see covered in the magazine, we’re all ears! Drop us an email at [email protected]

In the meantime, here’s a taster of what else you can expect from our April 2022 UK issue…

“When I told people I was going to visit the Massif de la Clape in Occitanie, even Francophiles looked confused. The ‘Pile of Stones’ or ‘cairn’ (in Occitan) is a long, limestone mesa covering 15,000 hectares. It was once an island, a haven for sailors off the coast of Narbo (Roman Narbonne). Joined to the mainland via alluvium drift, it’s now surrounded by an ocean of vineyards, which slope down to the flamingo-dotted waters of the Étang (lagoon) de Mateille.

This is an unsung corner of France, a place to escape the crowds in the Deep South. You can see the Pyrenees in the distance; there is a Spanish slant to local menus. The Languedoc used to supply cheap vin de table to the workers of France, and the 19th-century châteaux that dot the region date from this boomtime. The quality of its wines has changed, but this still feels a rustic region, with none of the glitz of the Côte d’Azur.”

Read more from Abigail Blasi in the April 2022 issue of FRANCE Magazine.

“‘I loved it better before.’ That was Édith Piaf’s reaction when Charles Aznavour finally followed her advice and got a nose job. At the beginning of his career, it seemed as though the stars would never align. Critics slammed the young performer for his looks, diminutive stature, raspy voice and unrefined lyrics. In an interview with Vogue Homme in 2017, he said: ‘Basically, I had nothing going for me. I wasn’t good-looking, I was short, my songs weren’t popular, and when they did become popular, all of a sudden they were too commercial.’ But with resolute tenacity and passion for his craft, Aznavour crooned his way into the hearts of many, leaving a lasting legacy as France’s most renowned chansonnier.”

Read more from Paola Westbeek in the April 2022 issue of FRANCE Magazine.

Discover the history of Bordeaux’ canelés (and make your own!)

“The canelé is one of the most beloved French pastries. Caramelised on the outside and moist on the inside (or ‘moelleux’, as the French would say), this petit gâteau has a perfect contrast of textures that makes it totally irresistible. Biting into a really good canelé, infused with the warm flavours of dark rum and vanilla, is a gourmet experience not easily forgotten. But not all canelés are created equal, and some can be downright disappointing. For the best canelés, you’ll want to plan a trip to Bordeaux (their hometown) or try your hand at making them yourself.”

Read more from Paola Westbeek in the April 2022 issue of FRANCE Magazine.

Like what you see? The April 2022 issue of FRANCE Magazine is on sale from 23 February. Take advantage of our great subscription offers and get FRANCE Magazine delivered straight to your door every month! You can also buy single issues from Mags Direct. Happy reading!

More in France in the UK, France Magazine