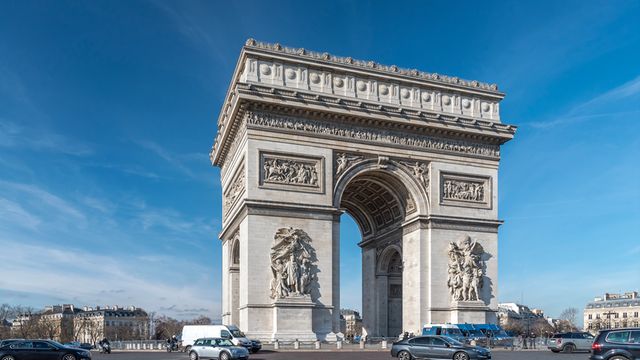 The Arc de Triomphe de l’Étoile stands proudly at the centre of the Place Charles de Gaulle on the western end of the Champs-Élysées. It is one of Paris’ most famous monuments and it honours all those who fought for France.

It was commissioned in 1806 by Napoleon, and when in 1810 he returned to Paris with his new bride, he had a wooden arch constructed to show how it would eventually look.

The foundations took more than two years and when the architect, Jean Chalgrin, died in 1811 he was replaced by Jean-Nicolas Huyot. It was eventually completed under the reign of King Louis-Philippe, between 1833 and 1836, with a final estimated cost of 10,000,000 francs which is about €65 million in today’s money. Napoleon never saw the finished Arc, as he died in 1821 – 15 years before its completion.

The names of all French victories and generals are inscribed on the arch, and beneath the vault the Tomb of the Unknown Soldier honours the dead who were never identified in the world wars.  The eternal flame located at the foot of the Arc burns in memory of the soldiers who have fought for France.

The body of Victor Hugo was displayed under the Arc in 1885 prior to his burial in the Panthéon.

In September 2021, a posthumous project planned since the 1960s by artists Christo and Jeanne-Claude saw the arc wrapped in silvery blue fabric and red rope.

The Arc de Triomphe is a focal point during national celebrations and ceremonies such as Bastille Day and Remembrance Day and is an iconic landmark in Paris’ landscape. It is the second-largest triumphal arch in the world, only surpassed by North Korea in 1982.

Previous Article 9 of France’s most iconic drinks, from Cointreau to Champagne
Next Article See inside: Henry IV’s French hunting lodge for sale