Windmills to visit in France 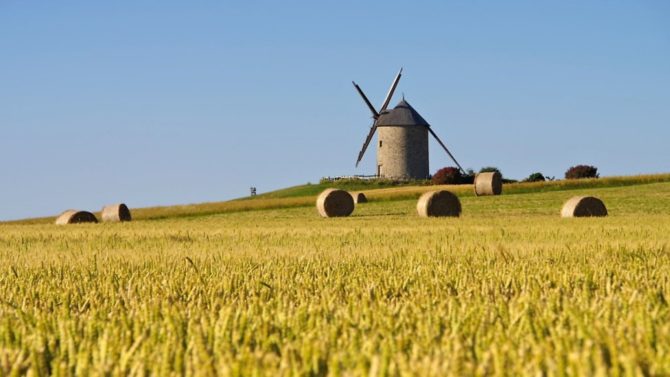 Discover the windmills of France, their history and new leases of life

Modern windmills (or wind turbines) are all about energy, tall and thin, uniform white and connected to the grid. But once, windmills were dotted everywhere across France, often playing a vital role in milling grain into flour. Of the surviving windmills, some now stand on display, some have been maintained as working mills and others have been transformed into accommodation. Here are 8 French windmills you can visit or stay in.

A beautiful 18th-century wooden windmill stands on the top of the hill in Cassel, a village in the north-east of France that was named this year’s Village Préféré des Français. The working mill is open for visits and you can see linseed being pressed inside. You can even buy a bag of freshly milled flour when you leave. At one time Cassel had over 20 windmills but this is the only one left. A visit to this windmill will also reward you with an amazing view of the surrounding Flanders landscape.

Find out more about Cassel

Just 5km from Mont St-Michel, Moulin de Moidrey dates from 1806 and was classified as a UNESCO World Heritage Site in 2007. You can enter the ground floor of the mill for free, and can pay for a guided tour if you wish to see the milling process. Visitors can also buy a variety of flours from the mill.

Moulin de la Galette refers to the area with the two surviving windmills in Montmartre, Paris. One is the Moulin Radet which now sits above a restaurant called the Moulin de la Galette. The Moulin Blute-Fin is situated on private property above rue Lepic. The area and the windmills have been immortalised in paintings by Van Gogh and Renoir.

The Moulin de Brignemont is now listed as a historic monument. The stone windmill has been fully restored and still crushes wheat into flour. Guided tours of the mill take approximately one hour, and you can learn about the mill’s restoration, the milling process and the windmill’s history.

A short, squat windmill on the top of a hill in the beautiful landscape of Tarn’s Lautrec, one of the ‘Plus Beaux Villages de France’. The Moulin à vent de la Salette dates from 1https://www.completefrance.com/wp-content/uploads/2022/04/gettyimages-977718674.jpg and was restored in the 1990s. It is open from mid-April to mid-October when you can see the inside, and learn about the history and operation of the mill.

The Moulin de Rairé, built around 1555 and originally owned by lord of the Garnache, Jacques de la Touche, the windmill has wooden wings and works without an electric motor. The owners offer guided tours of the windmill, surrounding buildings and mill exhibition. The tour lasts about 45 minutes. There is also the possibility of staying in a gîte next to the windmill.

If you want to take things a step further and stay inside the windmill itself, Moulin 85 in the department of Vendée, has been lovingly renovated into a holiday let. The accommodation, suitable for a couple to stay in, is arranged over four floors with a modern kitchen, shower room, and wood-burning stove. It is set outside a small village in a peaceful quiet area with vineyards and sunflower fields in the local landscape.

With one room on each of the three floors, accessible by a spiral staircase, including a double bedroom at the top with views across fields, the Moulin Roquecor is another wonderfully cosy accommodation option. It is located between the pretty bastide villages of Monflanquin and Villeneuve-sur-Lot and is 2km from Roquecor which has a local shop, bar and restaurant.

Spooky France: 13 of the most haunted places to visit