First published: 22 May 2020 by Helen Parkinson 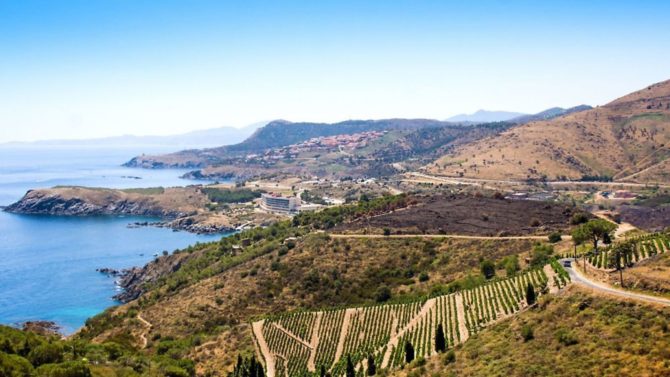 Where the mountains meet the Mediterranean, explore the best of south-west France on a lively walking adventure

“Whatever you do, hold onto the map!”

We’re teetering on a cliffside footpath south of Port-Vendres as fierce white horses crash against the rocks below. The tramontane has whipped my cheeks scarlet and the map threatens a hasty getaway from my freezing fingers. Ahead, Cap Béar lighthouse rises from the garrigue like a palm-fringed desert oasis, promising respite from the monstrous wind – if we can make it without being buffeted into the Mediterranean, that is. It’s hard to believe that just a few hours earlier, we were enjoying the autumn sunshine on a particularly balmy bench in Collioure harbour.

France’s incredibly diverse landscapes, from its towering peaks to its tempestuous coastline, make it the ideal holiday destination for walkers who crave variety. The most southerly French département, Pyrénées-Orientales, is no exception; the meeting point of the mountains and the Mediterranean in vibrant Catalan country marries high-altitude hiking with relaxed seaside strolls. My boyfriend and I are here to experience the ups and downs of the south west with Purely Pyrenees, a walking holiday company specialising in this incredible region. They’ve equipped us with everything we could need for our trip, from detailed route guides to bookings at favourite local restaurants to complete the day – all we need are our walking boots and a keen sense of adventure.

Prades and the Abbey of Saint-Michel-de-Cuxa (8km)

Our odyssey begins, footloose and blister-free, near the honey-hued town of Prades, a 40-minute drive west from Perpignan. Rejuvenated after a night at the superb Grand Hôtel de Molitg-les-Bains – surely an inspiration for Wes Anderson’s Grand Budapest Hotel – we’re taxied straight after breakfast from our accommodation, high in a nearby valley, to the starting point of our circular trail just outside Prades. And what a way to begin – at the gateway to the stately Abbey of Saint-Michel-de-Cuxa.

Once part of the territory of Barcelona, this Romanesque abbey was signed over to the French government in the 17th century. It was nationalised in the Revolution, falling into ruins until its revival in 1919. You may notice, however, that many of the cloisters are missing; these were purchased by a prolific American art dealer, George Grey Barnard, in the 1930s, and now form part of the Met Cloisters museum in New York.

We skirt the abbey walls to join the pleasantly shaded path alongside the narrow Canal de Bohère. It’s a flat and easy trail – despite the odd rickety footbridge – under a leafy canopy that sees us trace the stream for over an hour. Eventually, we veer off onto a country lane, where the only traffic we meet is a tractor and an Englishman walking his dog. Soon, our guidebook instructs us to follow a steep shepherd’s path.

“It can’t be that one; I can’t even see the top of it!” I say, staring up what seems to be a near-vertical slope with apprehension.

But my boyfriend insists that we must follow the book to a tee, so we gather our strength with a couple of oeufs durs smuggled from the breakfast buffet and tackle the track. It proves to be the right move; we soon pass a tumbledown hut, just like the book claimed we would, and after a short bout of clambering on our hands and knees, we reach the summit. The reward: views across the valley and over to behemothic Mount Canigou, the symbolic Catalan peak (the cross on the summit is often draped with the Catalan flag).

Having perched on a boulder to enjoy the scenery and give our weary shoulders a break from our rucksacks, we load up and continue along the hilltop, which to our relief plateaus out, then heads downhill to rejoin the Canal de Bohère and back to the abbey. From there, it’s a gentle, 40-minute stroll down to Prades, famous for its summer music festival and connection with renowned cellist Pablo Casals. We end the day soaking our weary muscles in the hotel pool and devouring a café gourmand fit for a king. After all, we need all the fuel we can get for tomorrow…

On the genteel Côte Vermeille, this was a sight we didn’t expect: burly commandos, laden with rucksacks, leaping into Collioure harbour with an almighty splash.

We’re about to start our walk southbound along the coastal path from the artists’ paradise to Banyuls-sur-Mer, but the military men doing their morning exercise have stopped us in our tracks. It transpires that the national commando training centre has been based here since the 1960s. We hope we’ll be blessed with similarly buoyant energy levels for today’s walk, which is twice as long as yesterday’s.

We skirt Collioure’s château – well worth a visit – and hike up to Fort Saint-Elme, which has stood guard over the town since the 16th century and is now a museum with a fascinating arms collection. It’s here we start to feel the unmistakeable windchill – barely noticeable in the sheltered harbour below. From the fort, we wend our way downhill on a trail flanked by cascades of vineyards, to the historic fishing town of Port-Vendres. A combination of the cutesy, colourful seaside houses you see on postcards and behemothic industrial port buildings that you definitely don’t see, it’s a fascinating stop-off and we enjoy the unexpected bustle. Soon, we leave behind the port for a coastal footpath devoid of people.

Then we feel it; the bone-shaking wind. Every step takes twice as much effort as we valiantly follow the guidebook’s orders to reach the headland, the French Navy-owned Cap-Béar semaphore our waymarker. When we eventually reach it without disaster, we heed the signs saying ‘Avoid headland path when windy’ without being told twice and drop down to the sheltered cove at the foot of the lighthouse, Ansa Santa Catarina. Time for a much-needed lunch of baguette and charcuterie on the beach in the sunshine, it’s agreed.

Batteries recharged, we carry on with renewed vigour along a sheltered but undulating cliffside path that drops down to a sandy beach. Eventually, we reach the former ammunition works at Paulilles. It’s a captivating site; chosen in 1870 by then-Minister for War, Gambetta, due to its distance from Germany and any urban areas, it was used to produce nitro-glycerine, dynamite used in the construction of the Panama Canal, as well as rubber. After closing in 1984, it was almost transformed into a holiday park but faced strong opposition, so was purchased by a local government-financed initiative at the beginning of the new millennium. On the day we passed through, it was nice to see some school groups learning about the area’s history and ongoing coastal conservation efforts.

Over another seaside hillock and we finally catch sight of Banyuls. Foolishly, we become complacent and put the guidebook away, but the tangle of vines is confusing and we end up adding another half hour in the scalding sun to our route. At last, the silky sands of Banyuls are within touching distance; we sink down a salted caramel crepe at a promenade café while watching the sunset. Over a glass of the local wine, we reflect on how lucky we’ve been to experience two very different trails in such a short time in this land of plenty. It’s proven that whether you’re more walk on the wild or mild side, there’s a route for us all in France.

Helen travelled with Purely Pyrenees, who offer tailor-made walking holiday breaks with meals, transfers and accommodation all included. This holiday was: The Art of Walking: A cultural journey to the Mediterranean (from €645, 0207 859 4906, purelypyrenees.com).