Take a stroll in and around Pornic in Loire-Atlantique 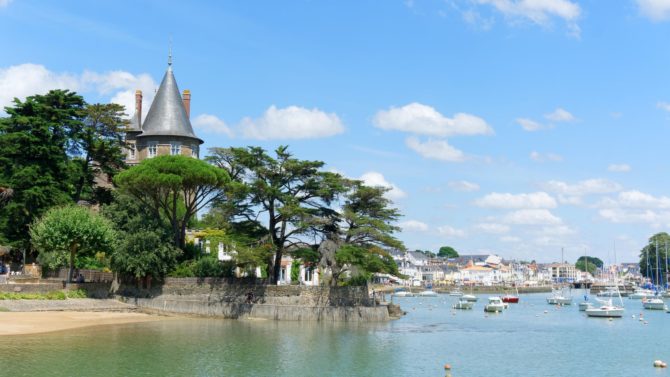 An imposing castle overlooking the water, hilltop villas with sea views, a pretty port at the heart of the town, the scent of saltwater on the air and a wide open bay dotted by boats; the town of Pornic in Loire-Atlantique always seems to be gazing dreamily out to sea. But while this Jade Coast treasure town may be all about the ocean, you’ll find plenty of hidden surprises on dry land – and the odd culinary treat along the way.

SWEET START
Begin your stroll near the tourist office and walk towards small harbour. A Gothic castle looms from on high, dominating the town. But before you get far, you may find yourself facing your first temptation. Whatever the time of day, it’s probably about the right time to grab a scoop of one of the many flavours on offer at Rêve de Glace, and the queues around the block from morning to night prove it.
Carry on walking – ice cream in hand, if you will – a little further around the port and take in the view. The blue Atlantic stretches out ahead as far and as wide as the eye can see. A little further is the beautiful Marius restaurant, with its welcoming terrace overlooking the water. Perhaps it’s time for a little pick me up? You’ve come to the right place; this grand building was built in 1896 as a casino, theatre and café, and it’s now home to a restaurant with a chic interior and an appetising menu featuring plenty of local seafood and a prize-winning wine list. But you can also just take a coffee or a glass of something cool (my children were wowed by the fact they serve drinks with sugar straws) and watch the world go by for a while.
If you can tear yourself away, walk a little further towards the castle and join the path that round the rocky hill on which it stands. This may be a good time to mention the local institution that is la Crêperie de la Fraiseraie, which sits a little higher than the path and has a courtyard in just the right place for sweeping views across the bobbing boats in the harbour.

COASTAL VISTAS
With so many wonderful places to eat and drink in Pornic, it’s just as well the town and its surrounding area offers more than its fair share of fresh air and walking routes to work off lunch. Back to that coastal path beneath the castle walls, then. A wooden walkway takes you around the rocks with the sea beneath you. Keep walking round this craggy outcrop and you will reach one of Pornic’s little beaches, the Plage du Château.
Head back into the town, but this time away from the sea and up into the higher parts of town to visit the late 19th century Saint-Gilles church, and the Calvaire de la Douve. To reach the cross, you need to make a steep climb up to the highest spot in the town; from here the vistas stretch as far as the Vendéen peninsular of Noirmoutier.
And after all that effort, it’s surely time to make your way back downhill to the marina and its welcoming terraces. Take a seat and take your time, you’ll need to replenish your energy levels for your next adventure.

IN THE AREA
Just a 20-minute scenic drive along the coast from Pornic is Pointe Saint-Gildas, a headland that points its nose right into the Atlantic. The area is a designated site of natural beauty, and offers views across the estuary of the Loire.
Further up the coast, less than an hour’s drive away, is the charming town of Le Croisic, with its half-timbered houses and little port. Nearby Guérande is famous for its salt marshes. Salt has been harvested here for a millennium and the area produces 10,000 tonnes of coarse salt each year, but only 300 tonnes of precious fleur de sel.

Inland from here is the regional nature reserve, La Brière, around 40 minutes by car from Pornic. This is the second largest of France’s marshlands, second only to the Camargue, and the park provides a rich natural habitat which teems with birdlife. Take a trip around the marshes in a chaland, a flat-bottomed boat, to see this peaceful paradise from a new perspective. Tucked away in the park is an idyllic thatched and white-washed cottage set in lush gardens which houses Le Mare aux Oiseaux, a Michelin-starred restaurant.
Around 20 minutes north of Pornic is Saint-Michel-Chef-Chef. Why does the name have two Chefs? It’s thought this 15th century settlement’s name has had many different spellings. In the 1600s it became Chevechef and then Chefchef, before settling on Chef-Chef. However you spell it, it is home to the factory that makes some of France’s favourite biscuits, Galettes Saint Michel. You can visit the factory to see how they, and other treats, are made.

GETTING THERE
The ferry port of Saint-Malo is a 2.5-hour drive from Pornic. Nantes airport is 40 minutes by car. There is an SNCF station right by the marina. Trains from Paris (via Nantes) take less than 3.5 hours
WHERE TO STAY
La Rêverie
A beautiful bed and breakfast with poolside bedrooms and copious petit déjeuner. Doubles start from €99.
WHERE TO VISIT
Les Pêcheries
On stilts above the ocean, accessible by a narrow wooden walkway, you’ll see these curious fishing huts, with square nets suspended over the water, all along the rocky coastline. Contact the tourist office to visit one – you can even rent them by the day and have a go at catching dinner.