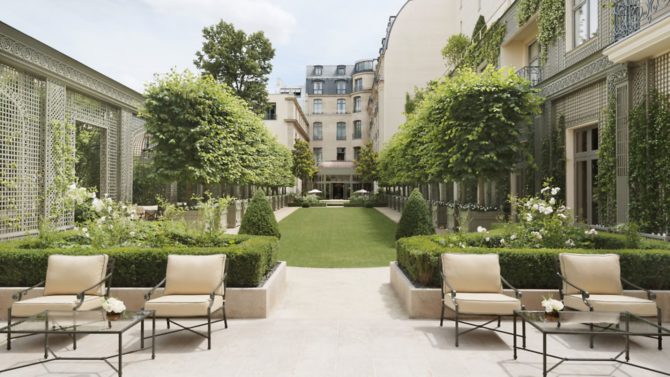 The World’s Best Awards 2020 have been announced, including travellers’ favourite hotels in the City of Light, as well as the best resort hotels across France

New York-based Travel + Leisure magazine has announced the winners of this year’s World Best Awards which include many hotels and resorts in France. Celebrating its 25th year, the awards are voted for by its well-travelled readers with categories including Top 100 Hotels in the World and Top 15 European Resort Hotels. This year’s survey closed on 2 March, just before lockdowns came into force around the world due to coronavirus.

In June, hotels in France were given the green light to reopen and tourists are now able to visit from many countries including the UK, Australia, Canada and New Zealand, without restrictions.

Winners of The Top 10 Hotels in Paris

As well as taking the top spot in the French capital, the Ritz Paris also ranked at number 29 in The Top 100 Hotels in the World and number four in The Top 15 European City Hotels.

The iconic hotel’s rooms and suites bear the names of Coco Chanel, F. Scott Fitzgerald and Marcel Proust and overlook its Grand Jardin and the Paris skyline. Located in Place Vendôme, marvel at the opulent Art Deco bar and enjoy breakfast in the glass-roofed winter garden. The hotel is reopening on 24 August.

First opened in 1925, Le Bristol Paris has been completely renovated during its recent closure and is preparing to unveil a new courtyard garden, as well as rooms and suites reimagined from floor to ceiling.

With nearly a century of history behind it, it was the first hotel to earn the distinction of ‘Palace hotel’ which is only awarded to establishments achieving excellence. Le Bristol Paris reopens on 1 September.

Surrounded by the boutiques of Rue Saint-Honoré and steps from the Place Vendôme, Mandarin Oriental, Paris is inspired by fashion and artistic creativity.

Its rooms are influenced by the Art Deco era and enjoy views over the garden with some also benefitting from private balconies and terraces.

Ideally situated in the heart of Paris on the Left Bank, this intimate hotel has been designed along the lines of a private residence.

It is a warm, boutique 5* star hotel with loving care put into each of its 28 rooms and lounge. It is located on a small street with wonderful boutiques and restaurants nearby.

The Prince de Galles has delighted guests since opening in 1929. Situated on Avenue George V, just a few steps from the Champs-Élysées, there are luxury boutiques on the doorstep, as well as the tranquil beauty of the Seine and legendary landmarks including the Arc de Triomphe.

It belongs to The Luxury Collection which also came in at number 18 in The Top 25 Hotel Brands in the World.

One of the most luxurious hotels in Paris, Park Hyatt Paris-Vendôme is located in an historic building near Place Vendôme and Palais Garnier in the heart of the city.

Its rooms feature contemporary architecture and classic touches, including custom artwork and apartment-style suites. World-renowned hair designer John Nollet also has an exclusive salon in Suite 101. The hotel is reopening on 1 September.

Located on the prestigious Avenue Montaigne, Hôtel Plaza Athénée is chic and stylish, surrounded by some of the world’s most luxurious fashion brands including Dior and Chanel.

Its spa is also decorated with fashion sketches by Christian Dior and photos of his fashion shoots at the hotel. The hotel is due to reopen on 1 September.

An Art Deco landmark built in 1928, Four Seasons Hotel George V is nestled in the Golden Triangle of Paris, just off the historic Champs-Élysées. Its oversized suites have Eiffel Tower views and its three restaurants, with five Michelin stars among them, are home to some of the best food in France.

Since 1979, Relais Christine has been one of the Left Bank’s best-kept secrets with the friendly atmosphere of a family home accompanied by the attentive service of a luxury hotel.

Each of its 48 unique rooms and suites feature touches such as antiques, cosy velvet and marble bathrooms. Under the 13th-century vaults, there is also a spa offering treatments by Maison Guerlain.

Hôtel Lutetia is an iconic landmark situated in the vibrant Saint-Germain-des-Prés area of Paris and the only luxury ‘Palace hotel’ on the city’s Left Bank.

Originally opened in 1910, the building’s design was a daring move from Art Nouveau to the emerging style of Art Deco. The hotel now features an eclectic mix of restaurants, bars and lounges throughout the historical ground floor.

Why France is the best place to go this summer

My life as an haute couture embroiderer in Paris

Previous Article Why living next to a cemetery can have some advantages…and seven other things we learnt in the August issue of French Property News, out now!
Next Article Win a copy of A Shooting at Chateau Rock by Martin Walker