Discover the magical murals of Béziers

First published: 7 May 2021 by Stephen Turnbull 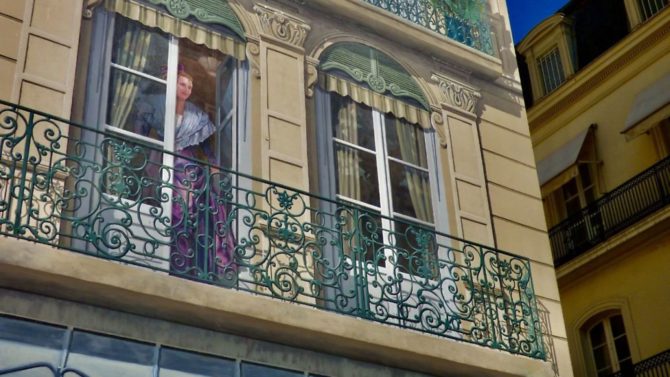 Some of the buildings in Béziers are not what they seem. At first glance, you probably won’t notice. But do a double-take and you’ll discover they’re covered with magical trompe l’oeil murals. Better still, the murals are linked by a delightful trail – the Circuit Biterroise – that snakes around the city, telling fascinating stories from local history.

Guided by a map of the trail from the tourist office, I set off in search of my first mural: Béziers-born French Resistance leader, Jean Moulin. Moments later I’ve found the right location but not the mural. ‘Surely it’s around here somewhere?’ I mutter to myself, as I scan the buildings again. Then I spot it. And in the same instant, I applaud the trick: so well has this work of street art been blended into the urban background, it’s literally ‘hidden in plain sight’.

As I approach the mural, I’m filled with an array of childlike emotions. There’s excitement at finding my first ‘treasure’ on the trail, wonder at observing the magic of trompe l’oeil close up, and curiosity about the man, looking distinctly like a character in a film noir, staring down at me from the balcony. However, my mood turns to sadness and humility as I learn from the accompanying plaques about Moulin’s fate: captured by the Gestapo, he was terribly tortured and later died in mysterious circumstances. Nonetheless, up to his final breath, he never gave away his comrades, his heroism inspiring them and earning him a ‘resting place’ at the Panthéon in Paris.

Stepping back to reflect, I’m suddenly spellbound by the notion of an historical figure being brought so vividly back to life yet frozen in time. But I’m happy to conclude that cognitive dissonance is all part of the magic.

Hitting the trail again to track down the next of the (fourteen) murals, I recall my knowledge of art. The trompe l’oeil genre is perhaps best illustrated by the mind-bending optical illusions of 20th-century Dutch artist M.C. Escher. However, it has a long and rich tradition that includes such marvellous masterpieces as Caravaggio’s Supper at Emmaus (1601), and Pere Borrell del Caso’s Escaping Criticism (1874).

More recently, the technique has been taken up by pavement artists the world over, drawing us into impossibly realistic 3D landscapes. However, in contrast with these essentially ephemeral works, the murals in Béziers – brainchild of the city’s mairie – have been designed for lasting impact.

Achieving this on such a huge scale though required a ‘fresquiste’ (mural painter) of supreme skill. Enter Patrick Commecy and his team from A-Fresco, based near Lyon. Typically, it takes them many months of meticulous research, planning, and execution to produce a mural. Key to the planning phase are ‘maquettes’ – small models that aid visualisation of the concept.

But how are the designs actually transferred to the walls? The short answer is it’s a very complex process based on the ancient technique of ‘marouflage’ – mounting pre-painted sections to the surface using a grid, then applying more paint. Hence, Patrick regards himself as ‘more artisan than artist’. However, charming modesty aside, the further I go along the trail, the more I’m impressed by his all-round creativity.

I’m enamoured by the power of this unique approach to storytelling, despite having the limitations of my local knowledge exposed. I had no idea for instance that Béziers was at the centre of a winemakers’ revolt in 1907 that threatened a secession of the south, or that one of the Chemin de St Jacques pilgrimage routes to Spain branches through the city.

I’m also struck by the sheer diversity of the murals, each with its own special character. If I had to pick a favourite, it would be the ‘mid-19th century café’ on the Allées Paul-Riquet. At first sight, the main tableau of elegantly dressed gentlemen seems sedate enough. But it’s the woman peering furtively from the balcony above who holds the key to the story; and it couldn’t be more French.

It appears that said woman, Marie Cauffopé, had the Madame Bovary-esque audacity to indulge in infidelity. Sadly, it was all too much for her fiancé François: on uncovering the truth, the poor monsieur leapt to his death. Quelle horreur! The tragic tale was then adapted by writer Alphonse Daudet and his play was set to music by composer, Georges Bizet. Ultimately, this became – you guessed it – the celebrated Suite de l’Arlésienne. However, as disgruntled locals maintain, it should have been entitled La Biterroise.

Looking back on the experience overall, I have to say, ‘bravo’ to both Béziers and Patrick Commecy. Together, they have created not just a captivating collection of street murals, but a truly magical trompe l’oeil trail.

Find out more about the trail at Béziers’ tourism website.

Previous Article Brittany bargains: find your dream house in France for less than €150,000
Next Article France added to amber list of travel destinations