Where are the greenest towns and cities in France? 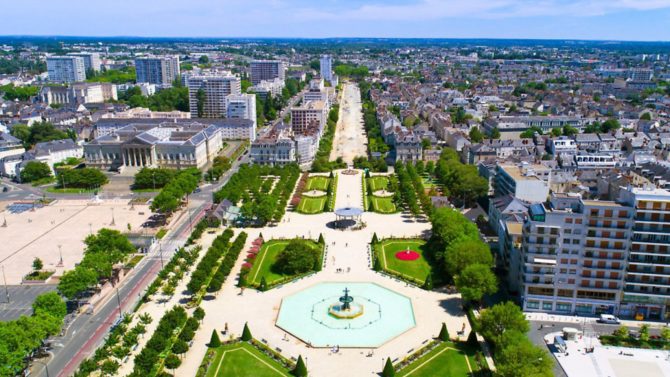 From recycling schemes to public parks and green spaces, a number of French cities are making an effort to become more environmentally friendly. According to a report these are the 10 greenest cities in France

Nowadays, most people are conscious of looking after planet Earth. Whether it’s recycling empty wine bottles of taking a reusable bag to the shops, there are so many ways to do your bit. It’s a responsibility many people take into account when moving to France, but thankfully, there’s no need to up sticks and move to a solar-powered windmill in the middle of nowhere in order to have an environmentally friendly lifestyle.

Many of France’s towns and cities are paving the way for eco living and a recent report from Observatoire des Villes Vertes has revealed which ones come top of the list. The report looked at 50 of France’s largest cities and scored them out of 100 in categories including how much green space was available, tree management, recycling schemes and whether there was a biodiversity plan in place. These were the top 10 cities…

There’s plenty of green space to go around everyone in Angers – 100m² per person in fact, well ahead of France’s national average of 48m². Its generous share of greenery is perhaps down to the fact that Angers allocates 3.5% of its budget to the creation of green spaces (more than any other French city); an investment that is clearly paying off seeing as Angers is one of the best cities in France when it comes to air quality. As well as the green parks and spaces that are dotted across the city – perfect for getting a breath of fresh air on your two-hour lunch break – you’ll notice that its roadsides are dotted with lots of trees and around 50 ‘green pods’; colourful planters installed on the pavements that are maintained by local residents. As well as acting as a refuge for insects, they also brighten up locals’ commute on their way to and from the city.

12 ways to live a sustainable lifestyle in France

Waste not, want not is the way of thinking in Nantes. Whether it’s the redevelopment of Île de Nantes from industrial shipyard to cultural hot spot or transforming deserted banana warehouses into nightclubs, bars and restaurants, the capital of Loire-Atlantique is renowned for its urban recycling. Whether or not locals here have their own private plot of green is neither here nor there – all residents in Nantes live within 300 metres of a green area, and the Jardin des Plantes that’s located right in the city centre is one of the most popular. Its seven hectares compromising 10,000 plant species and 5,000 new-season flowers are good for your mind and soul – just try passing one of the giant grass-made creations without smiling. A walk along the River Loire is bound to cheer you up too, especially when you spot the colossal metal serpent emerging from the water; a stark reminder to look after life in our oceans as well as on land.

Strasbourg is bidding for the European Green Capital 2019, so its no wonder it’s a leading example when it comes to eco living. Rather than just advise residents to recycle, the Alsatian capital actively encourages locals to recycle their green waste, offering initiatives such as funding assistance, providing a recycling centre and organising free internships to learn more about the benefits of recycling. The city is also making it easy for locals to travel more ecologically, with its special out-of-town car parks where motorists can leave their vehicles and take the tram to the city centre. There is also the Deux-Rives footbridge that crosses the city’s cross-border garden with the German town of Kehl. But perhaps the biggest encouragement to just get out and walk is the fairy-tale setting of Strasbourg itself. Who wants to be sat in a car when you can be exploring those crooked streets, flower-covered bridges and quaint canals on foot?

As one of the first cities in France to start a big-city bike rental scheme (its fleet of Vélo’v bikes launched in 2005), Lyon is a leader when it comes to eco-friendly living. Locals in the city have a range of transport options, including its modern tram system, funicular cable cars, the electric car-sharing service Sunmoov’ and the vaporetto boats that travel to the Confluence neighbourhood. Once the deserted docklands, the Confluence is set to be the WWF’s first sustainable neighbourhood in France. Its energy-efficient buildings, fitted with solar roofs, will house offices and shops, as well as apartments complete with composting spaces, children’s playgrounds, picnic areas and rooftop gardens where residents can share their home-grown fruit and vegetables. But living in Confluence doesn’t mean being cut off from the rest of Lyon – three new bridges, including La Transversale, which is reserved for bikes and pedestrians, will span both the Rhône and the Saône, linking residents to the city. Find out more about the city with our insider’s guide to Lyon.

The very fact that Caen has a ferry port means a green lifestyle is more obtainable, especially if you’re travelling back and forth to the UK: travelling by ferry cuts CO2 emissions by around one third, compared to flying. Cutting your carbon footprint when living in the city is easy too, thanks to Caen’s modern tram network and extensive cycle paths that, whether you’re on your way to work or popping to the boulangerie, take you past some of the city’s most iconic sites, such as the Château de Caen and the 19th-century Musée des Beaux-Arts de Caen. Hop off at the Vieux Quartier to take in all the lovely half-timbered buildings with a café au lait.

According to Rennes tourist website, Brittany’s capital is ‘very much a flower power city’. They’re not exaggerating. Whether it’s the burst of jasmine and honeysuckle from the city stone walls or the beautiful rose garden in Parc du Thabor, Rennes is bursting with blooms. And it’s not just the flowers brightening up the city either – many locals have gardening plots in the city. For those new to Rennes and its grow-your-own mentality, the L’Écocentre de la Taupinais organises free gardening workshops all year round and is a good place to start learning about organic gardening. For little ones, the Ecomusée offers workshops that teach children how to shear wool, make wooden toys and collect honey, something they might one day aspire to sell at one of Rennes’ 20 markets that take place across the city’s neighbourhoods.

Limoges has recently been voted the best city in France to retire – its myriad art galleries and museums (which host lots of exhibitions on Limoges porcelain) mean you’ll never be stuck for ideas for a rainy day activity. But happily, Limoges is one of the sunniest areas of France so you shouldn’t have to be stuck indoors – a perfect place for those who like to get outside and make the most of life spent in the great outdoors.

Best places to retire to in France

Nîmes may be passionate about preserving its past – just look at its wonderfully preserved 2,000-year-old Roman amphitheatre – but it’s just as committed about safeguarding its future. As part of the Urban Transport Scheme, Nîmes actively restricted traffic in the city centre by providing environmentally friendly and economical public transport services – a key project was the implementation of a new bus service from the city centre to the A54 motorway. Living in arguably Languedoc’s liveliest city, you’ll never be short of a fiesta to get involved in, but those seeking some peace and quiet can always find it in Jardin de la Fontaine. The 18th-century gardens criss-crossed with bridges, terraces and water pools provide a green oasis in the city where you’ll find locals taking shade under an old oak tree ot meeting up for a game of pétanque.

Susatinable food and drink are at the top of every environmentalist’s list and the capital of the Champagne region does not disappoint. For starters, many of the city’s champagne houses use environmentally friendly techniques to make their fizz. For extra brownie points, have your bubbly among the trees at the Perching Bar. Located in Faux de Verzy, the bar is only accessible via wooden walkways and is powered by solar panels. For everyday life, join the locals and pull up a chair outside one of the Art Deco cafés that line the pedestrian boulevards. Just remember to recycle all those champagne bottles you’re bound to get through living there!

Being green can be as simple as growing your own fruit and veg, as the residents of Amiens know all too well. Here local gardeners, known as hortillons, grow produce in their floating market gardens that dot the canals. Some hortillons still sell what they grow at the water market in the St-Leu district, and in the lively Quai Belu in Amiens’ Old Town, where you’ll find plenty more seasonal produce from the hortillonnages (floating gardens). Having been elegantly rebuilt after the Second World War, Amiens’ city centre that can count a Gothic cathedral and the Maison de Jules Verne museum as its main attractions, is complemented by green spaces along the River Somme that are popular with runners.

What is it really like to live in rural France

7 beautiful gardens to visit on the Côte d’Azur