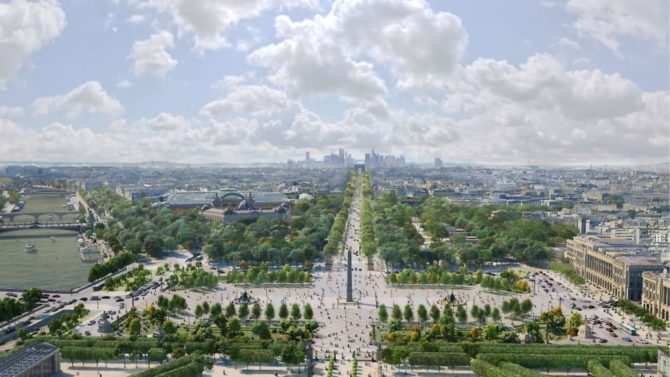 Along with the Eiffel Tower and the Arc de Triomphe, the Champs-Élysées is one of the iconic landmarks of Paris. Cars jostle for space with holidaymakers and protestors – apart from one Sunday a month since May 2016, when the avenue becomes pedestrianised. Now, an exciting new plan could see the street become what Paris Mayor Anne Hidalgo described as an “extraordinary garden” in the Journal du Dimanche.

The Champs-Élysées stretches for almost 2km through Paris’ 8th arrondissement, from the Place de la Concorde to the Place Charles de Gaulle. It was transformed from fields by noted architect André Le Nôtre in 1667, during the reign of King Louis XIV. At this point it was known as the Grand Cours and didn’t take its current name until 1709.

In recent years, the avenue has earned a reputation for its pollution levels. According to Architect Philippe Chiambaretta in an interview with The Guardian in 2019, the Champs-Élysées is more polluted than the busy périphérique ring road that encircles the capital. But thanks to a project from Chiambaretta’s team and the support of the city government and community leaders, this could change by the end of the decade.

In 2019, community leaders in Paris unveiled a green transformation that could see the avenue become one of the world’s most beautiful destinations once more. The plans would mean less space for vehicles and more trees to improve the ecology and aesthetics of the avenue.

In February 2021, Anne Hidalgo reiterated that the project would still go ahead, although the Paris Olympics would be priority.

Along the avenue itself, improvements will include the creation and enlargement of the pedestrian walkways and the number of vehicle lanes reduced to two (one of which being for shared vehicles). At the Arc de Triomphe/ Étoile end of the avenue, lush vegetation will encircle this emblematic monument and the infamous roundabout will be reduced from 11 lanes to seven. At the other end, the Place de la Concorde, beautiful mirroirs d’eau (reflecting pools) will be added, as well as plenty of shaded seating areas. Meanwhile, at the Jardins, there will be the renovation of the former Haussmannian flower market (Vacheries Anglaises), better pathways and more greenery planted beside the Seine.

With 100,000 people taking a stroll down the avenue every day, it will be a huge undertaking but one with an ultimately positive outcome for people and nature alike. As Joe Dassin sang: “Everything you could want is on the Champs-Élysées!”

Why Annecy in France is well worth a visit

Previous Article Easter gift ideas for Francophiles
Next Article Setting up a food business in France…and 10 other things we learnt in the April 2021 issue of French Property News (plus Living France), out now!