Stay the night in a UNESCO World Heritage Site in France 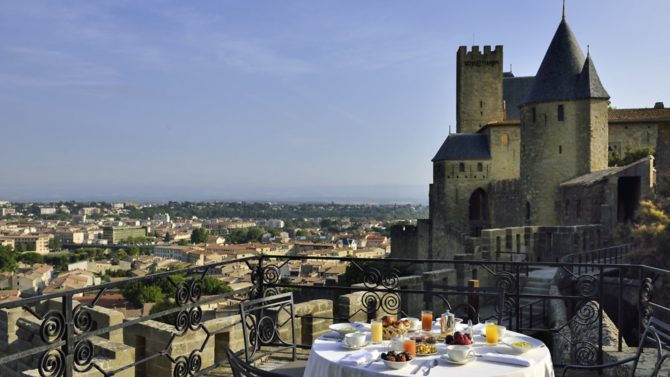 Stay at this five-star hotel within Carcassonne’s UNESCO-listed medieval citadel and you will experience some of the fairy-tale magic for which the fortified town is famous. Many rooms have views of the cobbled streets, or the ramparts, which also provide an enchanting backdrop for enjoying aperitifs on the terrace. Alternatively, relax in the book-lined library bar, before sampling Michelin-starred cuisine in the La Barbican restaurant. For more luxury, take a treatment in the hotel spa or go for a dip in the outdoor heated pool.

On UNESCO’s World Heritage list since 1996, the 240-kilometre-long Canal du Midi is an enduringly popular holiday destination, and what better way to experience it than from the water itself? Minervois Cruisers is based in the hamlet of Le Somail, allowing easy access to must-visits such as Narbonne, Carcassonne and Béziers as well as the vineyards of the Minervois. You can choose from a range of all-steel English canal boats, or wide-beam craft, with spacious accommodation for either two or four people for the narrowboats and up to ten in the wide-beam vessels. No previous boating experience is required.

Prices from £895 per week for a two-berth narrowboat

Explore one of France’s most iconic landmarks in peace after the day trippers have left the rocky islet, by staying at this three-star hotel. It occupies a 15th-century building on Grande Rue, the only street. The 29 bedrooms overlook the bay, the medieval Benedictine abbey or the village, and contain flat-screen TVs with international satellite channels, and a mini-bar. Dine on local fare in the restaurant, including a version of the famous omelette created by Mère Poulard, while taking in panoramic views of the bay, which is part of the UNESCO World Heritage Site, along with the island itself.

The capital’s first floating hotel is moored alongside the Gare d’Austerlitz and has 58 rooms, some of which overlook the River seine. Walk along the banks, which gained UNESCO status in 1991, and within 20 minutes you will have reached Notre-Dame Cathedral and the Left Bank quarter. After a day’s exploring, relax beside the hotel’s plunge pool, or in the cocktail and tapas bar, where you also take breakfast.

10 of the most beautiful hotels in France

Quiz: How many of France’s iconic attractions have you visited?

Set within the UNESCO-listed, 18th-century district in Bordeaux, this four-star hotel is ideally placed to explore the city’s heritage. The banks of the River Garonne, the Grand Théâtre and other major monuments are a short walk away, and the hotel is opposite the CIVB, which represents the growers, merchants and brokers of the area’s wine industry. The rooms are quiet, elegantly decorated and offer views over the expanse of the Place des Quinconces.

Get back to basics at the Couvent de la Tourette near Lyon, the last major building completed in France by Modernist architect Le Corbusier, and one of 17 to be listed by UNESCO. Built for a group of Dominican friars, the accommodation has stayed true to its humble origins, with 100 cell-like rooms simply furnished with a single bed, desk, sink and shelves, and a small balcony overlooking the park. The austere exterior is offset by colourful pipes, floors and doors, as is the sparse dining room, where meals are served to guests and to around ten Dominicans who still live and work here.

Lying in the historic centre of Dijon, the Maison Philippe Le Bon is made up of three listed hôtels particuliers, one of which dates from the 15th century. Rooms are decorated in a modern style that complements the period surroundings. Before dining in the traditional restaurant, you can enjoy a glass or two of the famous Burgundy wines in the stunning Gothic courtyard. Historic Dijon is part of the ‘Climats, terroirs of Burgundy’ UNESCO site, which includes parcels of vineyards in the nearby Côte de Nuits and Côte de Beaune.

Anyone interested in industrial history will find plenty to discover in the Nord-Pas-de-Calais mining basin, whose pits and towering slag heaps were designated a UNESCO World Heritage Site in 2012. Gosnay is a former mining town, 40 kilometres from Lille, and it is where you will find the Domaine de la Chartreuse. It comprises two hotels – the four-star La Chartreuse du Val Saint Esprit and the three-star Best Western La Métairie – as well as three restaurants offering gourmet and traditional food, a fitness room, tennis courts and a 1.5-hectare French garden.

11 secluded retreats in France you will love

Queen Marie-Antoinette once stayed overnight at this palace-turned-hotel, and guests still receive the red-carpet treatment. The classically designed four-star hotel overlooks Place Stanislas, the largest of three 18th-century, UNESCO-listed squares in the former capital of the Duchy of Lorraine. The 51 rooms incorporate styles from the Louis XV, belle époque and art deco periods, and some have views of the square.

This gîte occupies a charming old house in the heart of Saint-Émilion and makes the perfect base for exploring the famous wine-making village and the surrounding vineyards, which were designated a UNESCO World Heritage Site in 1999. Accommodation comprises two bedrooms, a bathroom and an open-plan living area with a fully equipped kitchen, as well as a TV and free Wi-Fi. Shops, bars and restaurants are a short walk away, so you can indulge in a glass or two of the local vintages.

Built by architect Claude-Nicolas Ledoux for Louis XV in the 18th century, the royal saltworks of Arc-et-Senans are a remarkable feat of architecture and engineering, as well as a pioneering social project, as the factory housed all its workers on site. The three-star hotel within the saltworks has 31 rooms, which have been refurbished by interior designer Jean-Michel Wilmotte, with decor by architect and comic-book artist Damien Cabiron. Both were inspired by Ledoux’s vision of architecture “as pure as that of the sun in its course”. Breakfast and dinner are available at the hotel restaurant.

Travel back in time by staying at this 1950s-themed hotel in the UNESCO-listed centre of Le Havre, which was rebuilt in concrete by the architect Auguste Perret after World War II. Architect-designer Vincent Duteurtre renovated the listed building in 2010, giving the 14 rooms a mixture of period and new furnishings, along with modern facilities including free Wi-Fi and flat-screen TVs. The Oscar’s name refers both to a 1950s style of French modular furniture and to the Brazilian architect Oscar Niemeyer, whose Volcan cultural centre is right opposite the hotel.

Exciting and unusual holidays in France you should try

Previous Article How to discover the history of your French property
Next Article Quiz: Can you complete these French sentences?