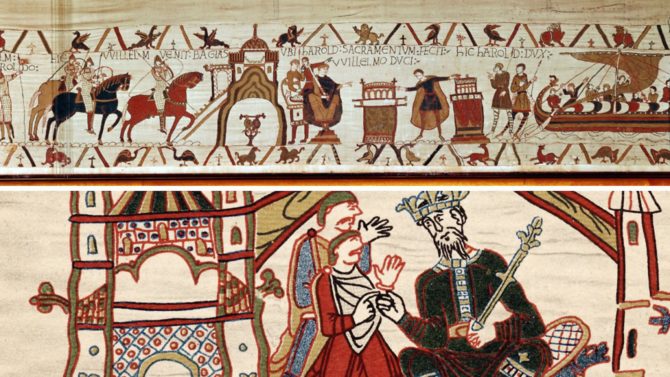 The Bayeux Tapestry has entered the virtual world thanks to a new online tool. The 70m-long embroidered canvas has been photographed in its entirety and can now be viewed in a panorama of high-resolution images on the Bayeux Museum website, with a zoom function that allows viewers to examine it in minute detail. A moveable timeline along the bottom of the screen allows you to choose specific sections you’d like to see, while French and English translations of the Latin inscriptions on the Tapestry are also provided in a handy text panel to the side.

The project, involving teams from the Bayeux Museum and the University of Caen, has given the 11th-century tapestry a 21st-century update. The high-resolution images measure 500,000 x 5,500 pixels, giving you the opportunity to study every stitch of the medieval embroidery and the numerous repairs that have been attempted over the years.

On display at the museum in Bayeux in Calvados, the historical tapestry tells the story of the Norman Conquest of England by William, Duke of Normandy, culminating in the Battle of Hastings and defeat of Harold in 1066. It features more than 70 scenes along its 70-metre length, with decorative borders running along the top and bottom. First referenced in an inventory from Bayeux Cathedral in 1476, the tapestry twice narrowly escaped destruction during the French Revolution. The question of who it was made for has been the topic of much debate by historians over the years, with one theory suggesting that it was the work of William the Conqueror’s wife Queen Matilda and the ladies of her court, while others suggest it was woven by teams of nuns in Canterbury, Kent.

In January 2018, President Macron announced that the Bayeux Tapestry would be loaned to the UK in 2022, with the location still to be confirmed. Previous loan requests, made in 1953 for the Queen’s coronation and in 1966 to mark the 900-year anniversary of the Battle of Hastings, were rejected.

Armchair travel: 21 virtual tours in France to try in 2021

Where to buy property just across the Channel in northern France

Who is Arsène Lupin, gentleman thief?

Previous Article New flights to Toulouse in France launched by Jet2
Next Article What are the laws on carrying out building work in France?