Road Trip: A taste of Normandy on the Route du Cidre 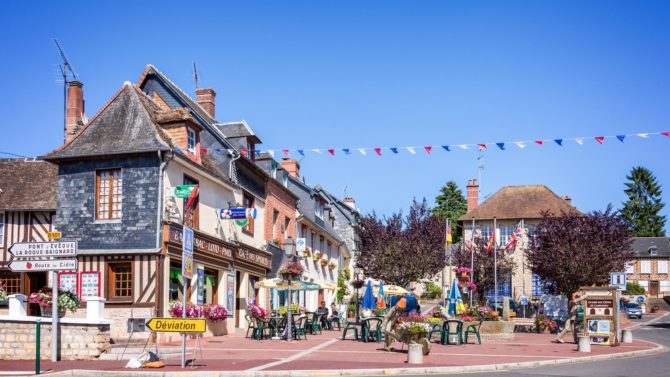 For the ultimate French road trip for foodies, try the circular ‘Cider Trail’ through Normandy’s pastoral heartland. You can even do it by bike!

As a big fan of calvados and cider, I was looking forward to following Normandy’s 40 kilometre-long Route du Cidre. This drive (or cycle) meanders through the Pays d’Auge region – recently classed Pays d’Art et d’Histoire – where most of France’s cider apples are grown.

According to legend, Basque sailors brought cider to Normandy in the sixth century, but it was Gilles de Gouberville, the son of a local lord, who distilled cider to create the region’s celebrated apple brandy some ten centuries later. I began my pomaceous trip at Le Domaine de Canon (from €60 per night), a delightful organic farm that has been producing cider since the 18th century. Staying in one of the domaine’s high-perched tree houses, I munched on confit de canard and other delights that were delivered in a picnic hamper to my lofty nest. After a stroll around the domaine’s magnificent park the next day, I followed the winding D16 to Cambremer. Here I stopped off to visit Crèvecœur-en-Auge’s stocky medieval castle, with its fascinating museum dedicated to the engineering feats of the Schlumberger brothers, the mineral prospecting pioneers.

Cambremer, which pops up constantly in Marcel Proust’s masterpiece À la Recherche du Temps Perdu, is a pretty hamlet centred on its 12th-century church and the Calvados Pierre Huet distillery. This striking half-timbered manor house, which has been owned by the Huet family since 1865, has cool cellars packed with cider barrels where I sampled a range of crisp, refreshing ciders, followed by several types of Calvados, before soaking up the alcohol with apple-purée-stuffed crêpes normande next door in the crêperie of the magnificent Jardins du Pays d’Auge.

After wandering for several hours in the three-hectare gardens, admiring traditional half-timbered houses, plants and ponds, I spent a restful night at La Villa des Tilleuls (from €100 per night) an elegant chambres d’hôtes within easy strolling distance of Cambremer.

I couldn’t resist, being a cheese lover, making a slight detour from my trail to visit Livarot. At family-run La Fromagerie Graindorge I learnt all about the town’s eponymous cheese, before returning to Cambremer with a boot full of the gloriously stinky stuff.

Picking up the Cru de Cambremer signs once more, I ambled along roads hedged with the timber-framed cottages and apple orchards that have inspired artists ranging from Magritte to Cézanne, to the Calvados Dupont distillery near the village of Victot-Pontfol. One of Normandy’s most celebrated producers, the Dupont family have been making cider, calvados and pommeau (a blend of cider and calvados) for generations. After the hour-long guided tour I sampled some of the family’s unique products, which include a slightly bitter, triple-fermented cider and their deliciously smooth, caramel-flavoured Calvados cream liqueur.

Beuvron-en-Auge, my next stop, is one of France’s Plus Beaux Villages. Wandering through flower-decked streets lined with half-timbered houses, including the richly-carved, 16th-century Vieux Manoir house, it’s easy to see why. After some much-needed shopping therapy in stores selling everything from antiques and craft items to plants and handmade jewellery, I made a beeline for Le Pavé d’Auge, a cosy, wood-panelled restaurant overlooking Beuvron’s picturesque old market square. Here I lapped up foie gras drizzled with a cider marinade and tarte Tatin slathered with rich Calvados cream, before stumbling back to Le Manoir de Sens (from €120 per night), a beautiful, old-fashioned guest house with its own stud farm attached, where I fell asleep to the sound of croaking frogs.

Leaving Beuvron-en-Auge along the tranquil D117 the following morning, I headed for Beaufour-Druval. This pretty hamlet, whose heraldic emblem includes an apple tree, is home to the Le Page cider farm where I had my first taste of poiré, the region’s bittersweet pear cider. From here the D117 led me on through lush pastures – and past zebra-striped timber-framed houses – to La Roque-Baignard, where Nobel-prize-winning author André Gide lived in the 1890s.

Gide, who inherited the sturdy 16th century Château de La Roque-Baignard from his mother, used the estate as his model for La Morinière in his novel L’Immoraliste, which is loosely based on his own life. Back in Cambremer once more I checked into charming chambre d’hôtes, the Domaine Les Marronniers (from €90 per night), and then celebrated the end of my fruit-themed trip at family-owned restaurant Au P’tit Normand. Sipping a glass of silky-sweet Calvados and apple juice blend Pommeau de Normandie Coquerel, I offered up a silent prayer of thanks to Normandy’s humble fruit which has given us such mighty flavours.

GETTING THERE
Travel with Brittany Ferries from Portsmouth to St-Malo. Cambremer is a 2hr 30min drive from Saint-Malo.

Previous Article How to travel around the world without leaving France
Next Article Télétravail-sur-mer: Remote working pushing up coastal property prices