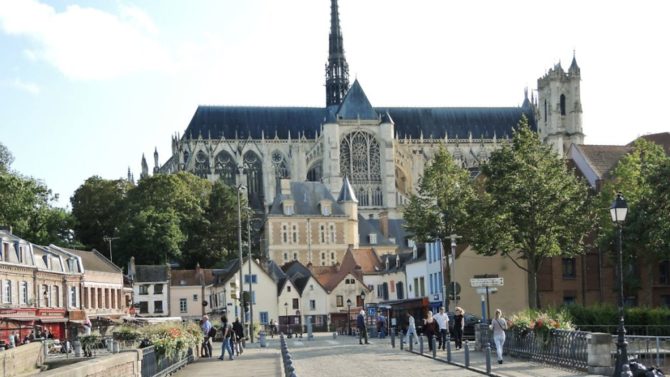 Day one: Amiens to Authuille 46km

The medieval city of Amiens, with its historical buildings and network of canals, makes a spectacular backdrop to the start of a journey across north-eastern France. Explore the narrow, winding streets and large open squares before visiting the imposing 13th-century Gothic cathedral. The building was completed in 68 years – an amazing feat for the time – and is known for its stained-glass windows and light-filled interior.

The River Somme flows through the city, irrigating the 300 hectares of floating market gardens known as hortillonages. You can explore the islets and small canals on a flat-bottomed boat (barque à cornet). During a festival on the third Sunday in June, hundreds of growers in traditional outfits bring their fruit and vegetables to sell at market, just as they have done for centuries.

If you can drag yourself away from the picturesque squares surrounding the Église Saint- Germain or the 18th-century theatre, the hamlets and farmland hugging the river are sure to impress. The commune of Rivery, on the outskirts of Amiens, is a charming place of winding avenues and plant-lined stone bridges. Traditional cafés and coffee shops line the riverside and make an ideal refreshment stop.

Continue along the D1 to Corbie and visit the town’s former Benedictine monastery. Founded in the 7th century, the abbey soon became a leading European centre for illuminating religious manuscripts and later in the Middle Ages developed an extensive library. Nearer to our own time, the damage caused by shelling during World War I is still visible on the abbey and in the grounds. Branch off on to the D42 to Méaulte and then take the D159 to the military cemetery at Authuille, where British field ambulances and Indian labour units were stationed between 1915 and 1918. The 473 white stone graves are a poignant reminder of what happened in this part of France a century ago, and the cemetery is eerily quiet, except for the tweeting of birds and the splashing of the river

Eat at…. Taverne du Cochon Salé (menus from €13) which specialises in local dishes.

Stay the night at: The three-star Hôtel de la Paix, in the centre of nearby Albert, just a few steps from the 1916 Museum (doubles from €89, hoteldelapaixalbert.com)

A short drive brings you to the military cemetery at Thiepval, where 72,000 missing British and South African soldiers from the Battles of the Somme have their final resting place. The memorial designed by Sir Edwin Lutyens is one of the most recognisable on the Western Front and stands close to the visitor centre and museum.

Now take the D73 past the towering Pozières memorial to the missing, and then follow the D929/D930 to Cambrai. Just south of the town, in Les Rues-des-Vignes, stands the 12th-century Abbaye de Vaucelles, which has the largest surviving Cistercian chapter house in Europe. Between March and October, the abbey is the venue for arts and theatre productions, and the cavernous auditorium is impressive in its own right.

Head north to Arras. Spend the afternoon exploring this picturesque city, which was extensively rebuilt after being badly damaged in World War I. Attractions include the Flemish Baroque town houses in Grand Place and Place des Héros, Vauban’s citadel and the childhood home of revolutionary leader Robespierre. Continue northwards towards Lens, making sure to stop at the towering memorial on top of Vimy Ridge which commemorates the 11,000 Canadian soldiers killed during World War I

Lens was at the heart of the Nord Pas-de-Calais mining region, which is now a Unesco World Heritage site. There are few historical buildings, but the industrial landscape is just as intriguing: the cone-shaped slag heaps create an unusual skyline and are especially effective when casting shadows over the town at sunset. One of the old mining yards now houses the strikingly modern Musée du Louvre-Lens, which displays exhibits from its parent museum in Paris.

Retrace your route to the outskirts of Arras and pick up the N25 for the hour’s drive to Naours, a village with a fascinating ‘underground city’. Caves dug out of the limestone acted as hide-outs for up to 3,000 inhabitants, from the Middle Ages onwards, and contain 300 rooms, a bakery and chapels, as well as World War I graffiti.

Abbeville, the gateway to the Baie de Somme and a 45-minute drive from Naours, has two notable churches: the Église du Saint-Sépulcre and the Collégiale Saint-Vulfran. The former was built on the site where French knights met at the start of the First Crusade in the 1090s, and now has a set of modern stained-glass windows; the latter is a fine example of the Flamboyant Gothic style. Finish your journey at the small but perfectly formed Château de Bagatelle, former holiday home of Louis XVI’s brother, and explore the decorated rooms and formal gardens.

Getting there: Amiens is a 1hr 45min drive from the northern ports via the A16 autoroute; The train journey from London to Amiens via Calais-Fréthun takes 3hr 15min.