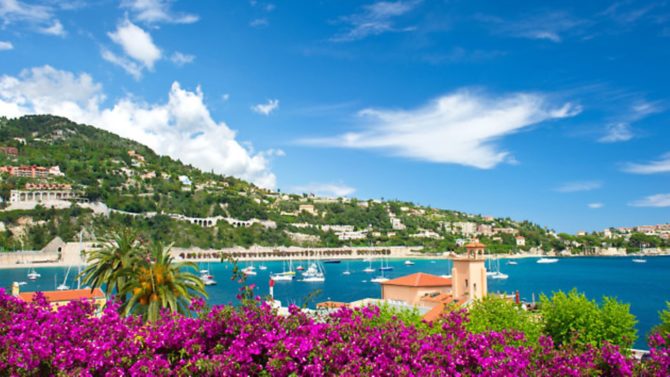 Located in the south-eastern corner of France, Provence-Alpes-Côte d’Azur is one of the most popular regions in France with holidaymakers and one of the most expensive areas to buy property in France. As is evident from the region’s name, Provence-Alpes-Côte d’Azur is home to the rolling lavender fields of Provence, the southern Alps and the stretch of Mediterranean coast known as the French Riviera or the Côte d’Azur.

The Côte d’Azur is very popular with the wealthy who moor their yachts in the harbours or buy villas overlooking the sea, as well as with families looking for beach holidays. Some of the major towns along the coast include Nice, Marseille, Saint-Tropez and Cannes. There is much more to Provence-Alpes-Côte d’Azur than just the coast – there are several national parks in the region, a number of ski resorts in the southern Alps and picturesque towns and villages including Avignon, Aix-en-Provence and Gordes.

Alpes-de-Haute-Provence is the area where the Alps meet Provence and it has a border with Italy. The Riviera is only 80km away and the capital is Digne-les-Bains.

Hautes-Alpes is located in the southern Alps with more than 30 ski resorts. The capital is Gap.

Alpes-Maritimes is tucked into France’s south-eastern corner and is home to the glamorous French Riviera as well as a number of hilltop villages. The capital is Nice.

Bouches-du-Rhône is located on the Mediterranean coast and is home to the untamed nature of the Calanques and Camargue as well as the vibrant city of Marseille which is the capital.

Vaucluse is where you will find the fragrant lavender fields of Provence as well as the historic city of Avignon which is the departmental capital.

Var is home to some of France’s most iconic seaside resorts, including Saint-Tropez, and the harbour town of Toulon is the capital

Train Eurostar now runs a direct service from London to Avignon and Marseille during the summer months or you can reach Nice from Paris by TGV in around five and a half hours.

Car The ‘autoroute de soleil’ (the A7) connects Lyon and Marseille and you can reach Lyon from Paris or the ferry ports.

Places to visit in Provence-Alpes-Côte d’Azur

One of the most visited areas of the Provence-Alpes-Côte d’Azur region is the French Riviera, stretching from Menton on the Italian border to Hyères. This stretch of Mediterranean coastline has been a popular holiday spot for centuries, especially with the rich and famous. The main seaside resorts along the French Riviera are Cannes, famous for its annual film festival; Antibes with its Vauban fortifications and luxury yachts moored in the harbour; fashionable and expensive Saint-Tropez where yachts sit alongside traditional fishing boats.

Less well known resorts along this stretch of coast are the historic town of Menton on the Italian border, the white sandy beaches which stretch between Fréjus and Saint-Raphaël near Cannes, charming and family friendly Sainte-Maxime in the Gulf of Saint-Tropez, Hyères, France’s top producer of cut flowers and gateway to the island of Porquerolles.

Read more: These stunning photos will make you want to holiday on the French Riviera

The major city along the French Riviera is Nice, and most visitors arrive in the region here at the large international airport. Nice only became part of France in 1860 and it retains a distinctly Italian flavour. Nice boasts an elegant tree-lined seafront, the Promenade des Anglais, and beautiful blue sea in the Baie des Anges. Further inland is a quaint old town, a busy market on the Cours Saleya, bustling restaurants, bars and shops as well as a number of museums.

The other major city in Provence-Alpes-Côte d’Azur is Marseille, France’s largest commercial port and second largest city. Marseille smartened itself up for its year as European Capital of Culture in 2013 and the futuristic-looking MuCEM (Museum of European and Mediterranean Civilisations) was built. Don’t miss the Vieux-Port, the vieux quartiers and the breathtaking views from the Notre-Dame de la Garda basilica perched on a hill.

The third coastal city to visit in Provence-Alpes-Côte d’Azur is Toulon. France’s main naval base is in Toulon and the city also boasts a quaint centre of stylish squares and boulevards. Don’t miss the daily market on Cours Lafayette.

Further inland is the historic city of Avignon. Classified as an UNESCO World Heritage Site, Avignon was the seat of the papacy in the 14th century and the impressive Palais des Papes remains one of the most important medieval Gothic buildings in Europe.

It’s not all about the coast though, Provence-Alpes-Côte d’Azur is packed with picturesque villages to discover. In the hills behind Cannes is Grasse, famous for its perfume production. L’Isle-sur-la-Sourge is famous for its antiques and is a pretty village built around the River Sourge and various canals. Saint-Rémy-de-Provence and Aix-en-Provence have both long been popular with artists and when you visit you will understand why. There are 18 Plus Beaux Villages de France (the most beautiful villages of France) in Provence-Alpes-Côte d’Azur, including Gourdon, Les Baux-de-Provence, Gordes and Roussillon.

One of the most popular sites in Provence-Alpes-Côte d’Azur is the Gorges du Verdon, a 25km-long river canyon that is up to 700m deep with turquoise-green waters.

Things to do in Provence-Alpes-Côte d’Azur

If you are looking for sandy beaches and clear blue sea then Provence-Alpes-Côte d’Azur is the place to go – you are spoilt for choice in terms of beaches whether you are looking for tourist hotspots like Nice and Antibes, glamour and luxury in Cannes and Saint-Tropez or quieter beaches like Menton and Hyères.

The coast isn’t all about beaches though, there are a number of coastal walks to follow or try driving the famous Corniche roads for some spectacular views. To get away from the tourist beaches try the Calanques National Park near Marseille. This is one of the most beautiful stretches of coast in France with secluded coves and steep trails. The villages of Cassis and La Ciotat are good places to stop.

As well as the coast, Provence-Alpes-Côte d’Azur is home to the southern Alps with a number of exclusive Alpine ski resorts, including Serre Chevalier. There are also the Mercantour National Park and the Écrins National Park, both popular with hikers and with han abundance of flora and fauna. The area known as the Camargue is also popular with those exploring the countryside – look out for the famous pink flamingos and white horses. The iconic images of Provence’s lavender fields can be found in the area known as the Luberon.

During the summer, cycling is a popular activity in Provence-Alpes-Côte d’Azur and the Tour de France usually passes through the region which is home to the infamous Mont Ventoux. This 1912m-high mountain is often one of the most challenging stages of the Tour de France.

Provence wines, especially rosé, are popular in Provence-Alpes-Côte d’Azur and freshly caught fish and seafood are served everywhere. Some local specialities include salade niçoise, a salad of tuna, olives, anchovies, egg and lettuce, pissaladière, the French version of a pizza, and socca, a crêpe made with buckwheat flour.

Provence-Alpes-Côte d’Azur is a lively region with festivals taking place throughout the year. Some of the most popular are the Nice Carnival, Menton’s Lemon Festival and Cannes Film Festival. There are a number of flower festivals and music festivals, especially jazz, are held throughout the summer.

Read more: Where to buy a bargain property on the Riviera

Near the coast, you will find a number of spacious villas, often with pools and fabulous views, and in towns and cities there are plenty of apartments. In rural Provence the most popular type of properties are the traditional farmhouses (mas) which are full of character. As you head into the Alps, the most common property style is a chalet built from stone and wood.

Previous Article Buying property in France: the process explained
Next Article Which Michelin-starred restaurants in Paris are worth splashing out on?