Paris’s east side: 3 walks off the beaten track 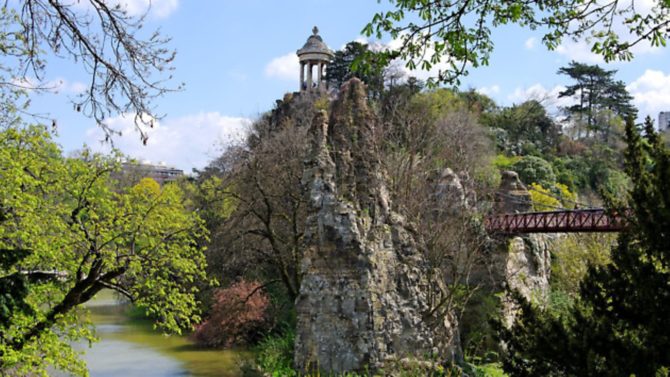 Whether you are a true Parisian aficionado or first-time visitor, the city’s east side is highly recommended to any curious individuals. Located on Paris’s Right Bank, the neighborhoods of Belleville, Buttes-Chaumont, Mouzaïa, and other districts within walking distance reveal an alternative and colourful side to Paris. Self-expression is encouraged, no two people speak alike, and stories recount many lives. Locals are proud to live in a place where people meet and greet in the streets. Aside from the true Parisian tradition of having a drink while the whole world passes you by, the newer trends of discovering street artists and unusual shops are going strong.

Home to France’s most famous chanteuse, Edith Piaf, and a number of other icons, Belleville is without a doubt the east side’s most legendary quarter. The bustling boulevard which intersects it is lined with exotic goods and friendly commotion. The pathway is often fully occupied by markets whose valuables range from produce to purses. Some say the street art in Belleville’s tiniest passages is the city’s most elaborate and provocative. It has become one of Paris’s most gentrified neighborhoods, which rather than being seen as a yuppie takeover, should be praised for its revitalisation. The Parc de Belleville is a breath of leafy air in the midst of an urban jungle!

The heights of Buttes-Chaumont are where many go to enjoy the majestic scenery of Paris from afar with a fantasy world in the foreground. Looking from the summit, one may admire the Antiquity inspired image of an acropolis situated upon a mountain, which is surrounded by a lake – there is even a grotto and waterfall! Granted these features are man-made, but they remind us of the great lengths to which past visionaries went to beautify a highly inhabited place. It is also THE spot where hip Parisians go for a lazy picnic in summertime, enjoying a glass of rosé on the grass while watching the sunset. Just minutes from the park, the villas of Mouzaïa, whose name derives from the eponymous Algerian commune, add a charming touch to the neighborhood. Built for blue collars during the industrial revolution at the end of the 19th century, the Mouzaïa boasts individual houses and little gardens, now sought-after by famous artists who enjoy what is called “the countryside in Paris”.

A true Parisian favorite, the Canal Saint-Martin is a popular place to relax and unwind all year round. Many locals meet up at Place de la République and slowly head north along the waterway, taking in the serene beauty of plane trees and little bridges. Streets such as rue Beaurepaire have become hubs for trendy outfitters and accessories. When the weather is nice, people of all ages meet to have picnics and drinks by the water. Upon reaching the Stalingrad district, visitors take time to admire La Rotonde restaurant, the large esplanade, and many ships docked along the shores of the canal. This family-friendly atmosphere of Molkky matches, bicycles, and paddle boats is just minutes away from the highly creative energy of the 104 performing arts center. In its entirety, the canal is a kaleidoscope of cool finds!

By Walk My Steps

Previous Article The views from these hotels will take your breath away
Next Article September issue of Living France out now!