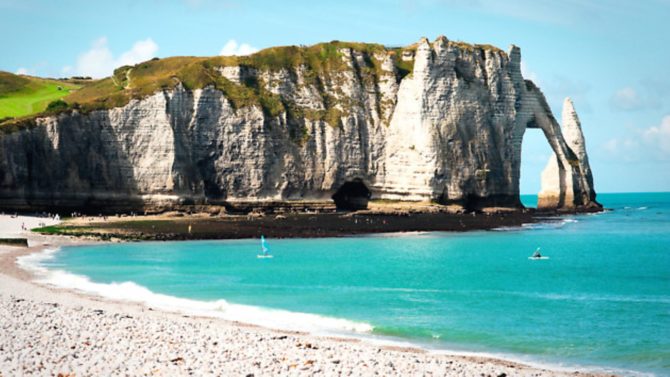 An insider’s guide to Normandy in northern France, including the main attractions to visit on holiday, the best towns and villages to live in, the local food and drink specialities, and buying property in Normandy

Located in northern France, Normandy was once split into upper and lower Normandy but since the regions of France were restructured in January 2016 they have been combined into one region. Normandy is often compared to southern England, particularly Devon which is just across the Channel, both in terms of the landscape and climate. Given this, and how easy it is to get to Normandy from the UK via ferry, it is no surprise that it Normandy is very popular with British expats and holidaymakers.

There is plenty to and discover in Normandy – you can explore the lush green countryside and rural villages; learn about the region’s turbulent history during the reigns of William the Conqueror and Richard the Lionheart, and the later role it played in the Second World War; visit the D-Day beaches and the chic seaside towns of Deauville, Honfleur and Dieppe, and try the local specialities of cheese and cider.

The region of Normandy is made up of 5 departments:

Manche juts out into the English Channel (La Manche) and is named after it. Its main attraction is Mont-Saint-Michel and the capital city is St-Lô.

Calvados has a long coastline which includes many of the D-Day beaches and has plenty of museums and memorials to its turbulent past. The capital city is Caen.

Orne is southern Normandy and has no coast but plenty of green countryside popular with hikers and horse riders. The capital of Orne is Alençon.

Eure is western Normandy and borders Ile-de-France. Known for its lush countryside and Monet’s garden at Giverny, Eure’s capital is Évreux.

Seine-Maritime is the northernmost department in Normandy and is home to a number of pretty seaside towns. The capital city is Rouen.

Ferry: Ferry is the easiest way to reach Normandy from the UK. The ferry ports of Dieppe, Le Havre, Caen and Cherbourg are all in the region and have regular ferries from Portsmouth, Rosslare and Newhaven.

Plane: There are airports at Deauville and Caen which have seasonal flights from the UK, or the airports at Rennes and Paris are just over an hour away.

Train: You can reach Rouen from Paris by TGV in an hour and a half and from there take regional services to the rest of the region. Rouen is on the Le Havre-Marseille and Le Havre-Strasbourg TGV lines.

Places to visit in Normandy

The historical capital of Normandy is Rouen, an attractive city/town on the banks of the River Seine. In the historic old town (vieille ville) you will find a maze of cobblestone streets lined with half-timbered (colomabges) houses – in fact Rouen boasts more than 2,000 of these houses. While in Rouen you should visit the market square where Joan of Arc was burnt at the stake in 1431 and the 13th-century tower where she was kept prisoner (the Tour Jeanne d’Arc). The other unmissable sight in Rouen is the towering gothic cathedral, the highest cathedral in France, which was a favourite subject of Claude Monet. Some of his paintings of the cathedral can be seen in the Musée des Beaux-Arts which houses an important collection of Impressionist works.

A major draw for tourists, especially in recent years, are the Normandy beaches, site of the D-Day landings in 1944 during a crucial phase of the Second World War. The main beaches to visit are still best known by their code names – Omaha Beach, Utah Beach, Juno Beach, Gold Beach and Sword Beach. There are many museums and memorials along this stretch of coastline but some of the major ones to visit are the American Cemetery and Memorial near Colleville-sur-Mer, the D-Day museum in Arromanches and the Mémorial de Caen, but there are plenty to choose from.

The other major period of history that has left its mark on Normandy is the reigns of William the Conqueror and Richard the Lionheart in the 10th and 13th centuries. You can follow in William the Conqueror’s footsteps, visiting his birthplace at the château in Falaise and the Abbaye aux Hommes in Caen which he founded in 1063 and was later buried in. Don’t miss the Bayeaux Tapestry displayed in a dedicated museum in the town of Bayeux which depicts the Norman invasion of 1066.

William the Conqueror commissioned many of Caen’s most famous sites, including the Château de Caen which now houses the museum of Normandy and the museum of fine arts. Much of Caen was destroyed in 1944 and has been rebuilt since.

Of Normandy’s harbour towns, the best ones to visit are Dieppe, which was the first seaside resort in France and was a fashionable destination in the 19th century; Le Havre, which was heavily bombed during the Second World War and subsequently rebuilt has a number of interesting museums to visit; beautiful Honfleur with its colourful houses making it instantly recognisable; Granville, especially in February when its eccentric carnival is happening.

Normandy is also home to several seaside towns which were popular with well-heeled Parisians in the 19th century and even became known as the Normandy Riviera. Of these the ones to visit are Deauville, an upmarket resort with a race track, casino and an annual film festival that attracts Hollywood stars, and Trouville-sur-Mer with a large beach, lively town and a famous fish market.

A kilometre off the coast of Normandy, along the border with Brittany, is the iconic Mont-Saint-Michel. An UNESCO World Heritage Site and one of France’s most-visited attractions, Mont-Saint-Michel is a must-visit.

The Normandy coastline was a favourite with France’s Impressionist painters, particularly Étretat which has been depicted in many Monet paintings. Étretat is part of the Alabaster coast, known for its dramatic white cliffs.

Things to do in Normandy

Normandy was a favourite with the Impressionist painters, particularly Monet, and you can visit a number of places that featured heavily in his paintings – Étretat, on the coast, Rouen cathedral, and, of course, the iconic waterlily pond at his former house and garden in Giverny. You could even try creating your own Impressionist work of art…

Seafood is a popular local speciality in Normandy, particularly scallops and mussels. The main local drink is cider, made from the numerous orchards found in Normandy, which goes rather well with the other local speciality, cheese. In fact, you will recognise a number of the town names in Normandy because you are used to finding them on your cheeseboard – Camembert, Livarot and Pont l’Evêque cheeses all originate from the towns of the same names. As well as cider, the local drink is calvados and apple brandy that originates from the department of Calvados (not difficult to see how it got its name!).

The Normandy countryside is worth exploring whether you are on foot, on a bike or on horseback. Try the area known as Suisse Normandie in Calvados and Orne, a landscape hugely popular with hikers and horse riders. There are plenty of bridleways through the countryside to explore on horseback and if you are interested in horses pay a visit to the Haras du Pin stud farm in Saint-Lô. If you want to combine exploring and drinking then try following the cider route which covers a trail of 40 kilometres including villages and local producers.

Normandy was once one of the leaders in the lace-making industry and a Royal Workshop was established in Alençon. You can find out more about the industry at the Museum of Fine Arts and Lace in Alençon.

Normandy is a relatively affordable region for property buyers which average property prices below the national average of €157,600. As with most regions, properties along the coast and in the popular major towns are more expensive, while if you head out into the countryside and the less well known villages, property is much cheaper.

Typical Norman properties are distinctive half-timbered houses, called colombages. You will also find plenty on longère houses which are also found in neighbouring Brittany. This is a rectangular house built from granite with a slate or thatched roof most often found in the countryside.

Find out more about Normandy on the Normandy Tourist Board website

The best ways to explore Mont-Saint-Michel

7 eye-opening World War I musuems to visit in France