You can now stay at the Château de Versailles 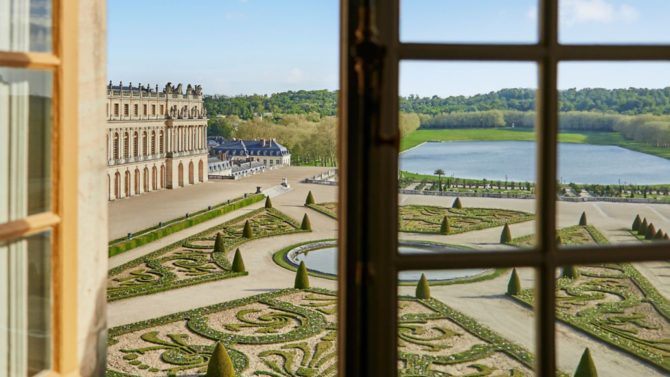 Ever wondered what it would be like to stay at the Château de Versailles? Wished you could see beyond your reflection in the Hall of Mirrors? Well now you can, as Le Grand Contrôle hotel opens its doors to guests for the first time.

Located within the grounds of the Château de Versailles, the hotel has been created in a building that was constructed by Louis XIV’s favourite architect, Jules Hardouin-Mansart, in 1681. It has been meticulously restored by architect and interior designer, Christophe Tollemer, and now boasts 14 rooms and suites, dining by Alain Ducasse and a luxurious Valmont spa with a 15-metre indoor swimming pool. The ambitious project first started in 2016 and the hotel finally opened its doors on 1 June 2021.

Guests at Le Grand Contrôle will also benefit from a number of exclusive experiences during their stay at the hotel. These include a private tour of the Estate of Trianon and The Queen’s Hamlet each morning, a private tour of the Château every evening with access to previously unseen areas, and unlimited access to the Orangery Gardens throughout the day. Boats and golf carts are also available for those keen to explore the Grand Canal and the 2,000-acre gardens.

For those keen to upgrade their experience even further, the hotel also offers a number of paid-for experiences including after-hours access to the Hall of Mirrors, a Marie-Antoinette-themed day with a costume fitting, a private performance at the Royal Opera, private dining with a string quartet in the former apartment of Louis XV’s daughters, and the chance to follow in the footsteps of former head gardener to the royals, André Le Nôtre.

Under Alain Ducasse, the world’s most decorated Michelin-star chef, the restaurant serves decadent menus inspired by the setting, from the Marie Antoinette afternoon tea to a five-course gourmet evening feast reminiscent of the King’s royal banquets, all of which can be enjoyed with views of the Orangery parterre.

Meanwhile, in the luxurious Valmont spa guests can revel in plenty of regal relaxation, enjoying the pool, spa and hammam and a range of treatments, notably the specially created Majestic Mirror facial.

Le Grand Contrôle is the much-anticipated seventh property for the prestigious Airelles hotel collection, joining Les Airelles in Courchevel, Mademoiselle in Val d’Isère, Le Refuge de la Traye in Méribel, La Bastide in Gordes, and Château de la Messardière and Pan Dei Palais in Saint-Tropez. Rooms at Le Grand Contrôle start from €1,700 which includes a dedicated butler, daily tours of the Château and the Trianon, access to the Palace grounds with use of boats and golf carts, plus breakfast, afternoon tea and a minibar.

5 day trips from Paris by train

Previous Article Guide to eating out in France
Next Article Recipe: Orange and Lavender Mini Cakes