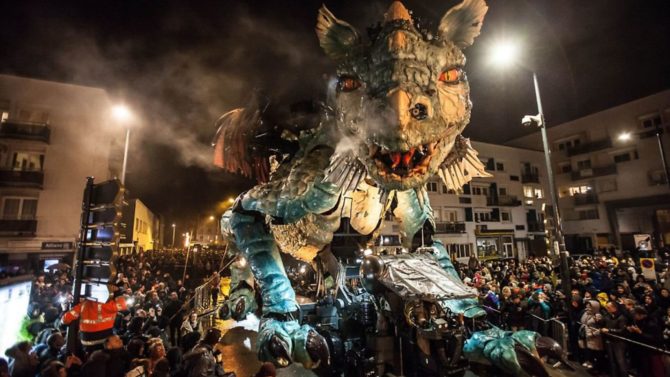 A new attraction is coming to the shores of Calais. It is 25m long and 10m high, scaly, green and has been known to breath fire.

The ‘Dragon de Calais‘ created by François Delaroziere and la Machine – a company which also created the Nantes elephant and the Toulouse minotaur – is a mobile, steel and carved wood construction that from 17 December 2019 onwards will be transporting people on 20 minute tours of the seafront.

Travelling at up to 4km/h (2.48mph) and handled by a team of four to six people, the dragon will be able to transport up to 50 people at a time on its back, giving a unique experience and a new vantage point of the northern France coast.

Dressed in leather, canvas and copper, Calais’ benevolent new guard has already been on an outing and introduced itself to the residents. On 31 October 2019 crowds lined the streets to watch as it travelled through townn – finding its voice, stretching out all 17.5 metres of its wingspan, and breathing out smoke, flames and water. It looked around nodding hello – its eyes, eyelids, ears, mouth and tongue are all animated. Since the event, work has continued on the machine to adapt it ready for the regular tours.

On 21 December, which will be the longest night of the year in Calais, La Veillée Bleue or ‘blue vigil’ will be a special event to celebrate the dragon’s inauguration. Starting at sunset, the dragon will be dressed in blue and visitors will be invited to take up this dress code too.

The new tourist attraction follows a large scale re-development of the Calais waterfront, and is one of several planned ‘city machines’. The project aims to get more people who arrive into the city’s ports, to stay and explore.

Previous Article QUIZ: How well do you know Provence?
Next Article Win! Paperscapes:Paris by Sandra Lawrence