Would you bare all on a nudist holiday in France? 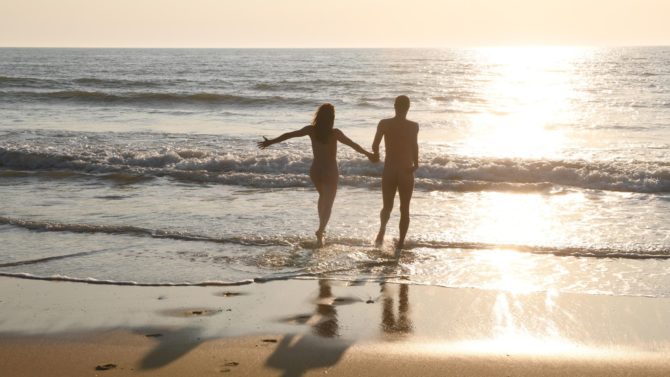 Some years ago during a family camping holiday in the south of France, my then six-year-old son asked me a question I’ll never forget. Clutching an empty jar of green beans for recycling, I was trying to determine which container at the campsite was for glass and which was for plastic. So far, so mundane. Then came the question: ‘Dad, why aren’t you wearing any clothes?

Naturism in France
The Médoc region on the Atlantic coast of France is internationally famous for its Bordeaux wines, but there’s another less inebriating liquid which draws people to the Médoc in even larger numbers: the Atlantic Ocean. And along the seemingly endless strands of beaches lining the Médoc coast is the golden sand beach of Euronat, a four-star holiday centre where the visitors are not only un-heeled but entirely unclothed.
In France, holidaying in the buff at places like Euronat is big business. France is, in fact, the world’s number one naturist destination, and the activity is promoted unabashedly by the French government’s tourist office. Every year an estimated 2.6 million French and 2 million foreign visitors – many of them refugees from the mercurial British sun – are drawn to France’s more than 150 naturist holiday centres and 120 naturist beaches. The bikini was invented in France in the 1940s, so should anyone really be surprised that the country is also the world capital of the nokini?

Established in 1975, Euronat is one of France’s oldest and grandest naturist offerings. Indeed, at over 825 acres, it’s the largest naturist site in Europe. A stroll around the site reveals that it is, in fact, more than just a campsite. In addition to tents, there are more than 500 chalets, mobile homes and bungalows of varying sizes, many of which can be rented, and some of which are lived in year-round. At peak season Euronat, which labels itself as a ‘village’, can host up to 9,000 visitors at a time. Although that may sound more like a town than a village, the site is so vast that it never feels crowded.

What’s on offer at a naturist campsite?
The best way to explore what Euronat has to offer is by bike. The beach is approximately one kilometre from where its shops and restaurants are clustered around a central square. There are six restaurants to choose from, in addition to a supermarket, a greengrocer, a bakery, and more. In fact, during their stay visitors who are so inclined really don’t need to leave the campsite at all, and many don’t. Unlike traditional campsites which are frequently used as bases for exploring regional attractions, most people go to naturist campsites specifically for the freedom to be naked. For this reason, naturist campsites in general and Euronat in particular offer a wide choice of activities to keep these captive-by-choice visitors extremely well occupied.

The 1.5km-long beach may be the jewel in Euronat’s crown, but the list of other amenities on offer is impressive: both indoor and outdoor pools (with waterslides and a separate paddling pool for toddlers), tennis courts, mini-golf, an equestrian centre, and a thalassotherapy, massage and beauty treatment centre for those who prefer their camping to come with a bit of pampering. Activities include everything from art classes for ceramics and painting to martial arts, gym, yoga and archery. In high season there are frequent evening concerts. There are also activity groups for children of different age groups which allow tired parents some kid-free time to relax.
Although the quality of the amenities on offer at Euronat is unusually high, traditional campsites in France can offer a similar level. So why go to a naturist campsite like Euronat when something similar can be found at a ‘normal’ campsite?
People who’ve never tried a naturist holiday may harbour concerns about whether such an environment is suitable for children. In fact, aside from the notable exception of Cap d’Agde in the south, naturist campsites in France are almost universally family friendly.

What are the rules at a naturist campsite?
No untoward behaviour is tolerated upon penalty of expulsion from the site. Aside from an obvious proscription of photographing or filming, the most important rule is that you don’t stare at others. Naturism is built on a relationship of mutual trust, and ogling other naked people is a flagrant violation of that trust. When talking to a fellow naked person, for example, eye-to-eye contact is always maintained. Out of respect, naturists learn to see without seeing, a skill which might be expressed as a kind of naturist Golden Rule, i.e., ‘Don’t gawk unto others as you wouldn’t have others gawk unto you.’ It can require a certain self-restraint, but that restraint quickly becomes second nature in an environment predicated on respect for others.

What’s the appeal of a naturism?
While children are generally less self-conscious than adults and therefore more at ease being naked in front of others, the appeal of naturism to grown-ups who’ve been conditioned by society to believe that nudity is inherently shameful is more complicated. So, what is it that compels naturists to do something so clearly in defiance of deeply ingrained social norms? Indeed, what, exactly, is the point?
To this perfectly reasonable question I would reply that most naturists feel a sense of liberation when naked – liberation from the physical restraints of clothing on a hot day, but, more importantly, an exhilarating unshackling from what we consider to be unnecessarily prudish social mores. I fully understand that for people who’ve never tried naturism, it’s difficult to comprehend why anyone, let alone millions of people, would come to France every year for a clothes-free holiday.
To be clear, it’s not that naturists nurse any deep-seated hatred of clothes. Personally, I think clothes are just super, and couldn’t imagine a ski holiday in the Alps without them. But they also serve as a type of armour. When we remove our clothing in a naturist environment, we metaphorically remove our armour and render ourselves completely vulnerable.
Not a particularly appealing prospect, one might imagine, but because we’re in a safe, non-judgemental environment, rather than experiencing a terrifying feeling of ‘I’m standing here totally defenceless!’ there’s an exhilarating feeling of liberation from the oppressive need to constantly protect ourselves.
Taking off our armour and voluntarily laying bare our bodies, with all their imperfections, is a gesture of trust rich in significance. It’s the non-verbal equivalent of declaring, ‘Greetings, my friends! I come in peace.’ And, naive and utopian though it may sound, I reckon there’s something beautiful in that.

Previous Article See inside: Escape to the Chateau DIY’s Chateau de Lomenie for sale
Next Article Moving to France post-Brexit: What belongings can you bring tax-free?