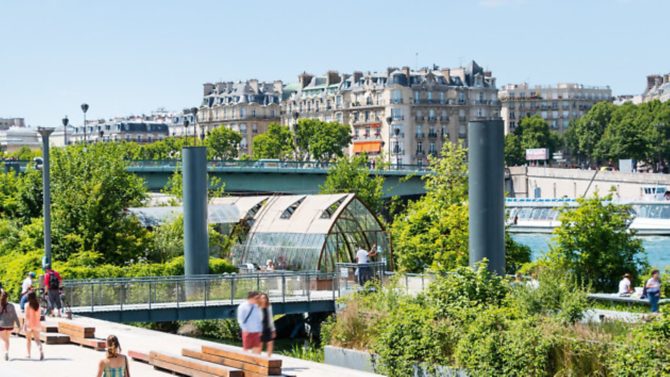 For something completely different from your usual parks, you can go floating on the Seine in the Jardins Flottants des Berges de Seine. Located on the banks near the Pont de l’Alma, five artificial islands, each linked by a bridge, offer five different types of gardens. The islets are populated with different plants including semi-aquatic species, high grass and 60 trees. The initiative is meant to respect the natural urban environment of the river banks and attract more species of fauna and flora.

Also known as ‘la promenade plantée’, these suspended gardens run across the entire lenghth of the 12th arrondissement along a path that used to be the train line between Bastille and Varenne-Saint-Maur. It’s the perfect way to escape the hubbub of the city while having a unique view of the district. The whole park is 4.5km long and starts on the pretty Viaduc des Arts.

Created on the site of a former wine depot, the Parc de Bercy, in the 12th, still retains elements of its past, such as a vineyard and old railway track. You’ll find it tucked away between Gare de Lyon and Cour Saint Emilion. It’s a lovely little park that has different elements to suit every wanderer’s moods, including a romantic garden, complete with pond, ducks and lilies, a skate park, and a vegetable patch where you can take a gardening class.

These gardens were only open to the public in 2011 and consist of several little parks attached to grand typical Marais hotels particuliers that make up the National Archives museum. The jardin de l’hotel Rohan has a large garden à la française, lined by plane trees and benches while the romantic Jardin des hôtels d’Assy et de Breteuil boast a stream, little shrubs and blooming cherry trees.

This large stretch of green lawn, perfect for picnics, is located just opposite the 12th arrondissement town hall and has a part of the Coulée Verte striding over it. A popular spot for Parisians in search of sunbathing sessions, this park is also famous for its fountain: it’s the first and only fountain in Paris that splashes out drinkable sparkling water!

Opened in honour of Anne Franck, this elegant park is set in the old private gardens of the Hotel Saint Aignan in the 3rd which now houses the Museum of Art and History of Judaism. It offers a pretty gravelled area as well as a beautiful vegetable patch and fruit tree orchard which are tended by local inhabitants of the district.

The Arènes de Lutèce (Paris’ former name) are listed monuments and the most important Gallo-Roman remains in Paris. Located in the Latin Quarter, the arenas used to be able to hold up to 15,000 people and visitors can still see the stage where actors would perform. Today, it is a great place to meet up with friends and people are often seen sitting on the former arena seats or even playing pétanque.

Tucked away from the busy streets, the crowds and the traffic is a little-known, rarely visited but charming little park in the 3rd. The Jardin Saint-Gilles-Frand-Veneur has a beautiful view of the Grand Hotel Veneur townhouse, stone benches and rose arbours. Those who come here seek peace, and conversations are held in quiet chats while couples enjoy moments to themselves in this little haven of tranquillity.

The best picnic spots in Paris