Take a look inside the new hotel at Disneyland Paris 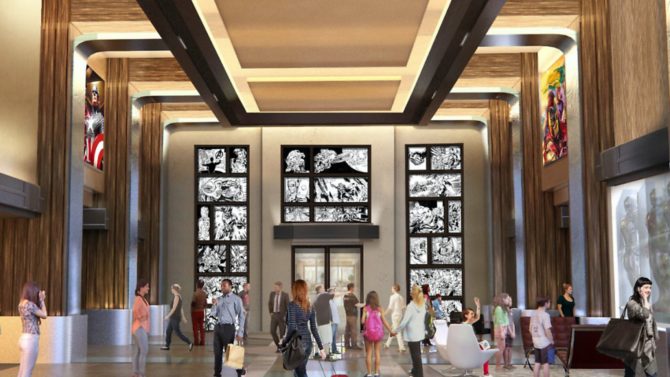 Inspired by a New York art gallery, Disney’s Hotel New York – The Art of Marvel will feature one of the largest collections of Marvel artwork in the world

Disneyland Paris has offered a first glimpse inside its new hotel which is currently under construction as part of development and refurbishment work at the French theme park. A new photo of the lobby of Disney’s Hotel New York – The Art of Marvel has been released alongside a previously released rendering to show progress on the hotel’s new lobby and how the redesigned hotel will look once completed. The new photo reveals an eye-catching new feature in the form of major Marvel art pieces that will be on display.

Inspired by a New York art gallery, the four-star Hotel New York pays tribute to the American city that was the birthplace of the Marvel Super Heroes and many of the artists who created them. With more than 300 pieces on display the hotel will have one of the largest collections of Marvel artwork in the world, including many that have never been seen before.

Other development projects at the resort include the creation of the Avengers Campus and Cars Route 66 Road Trip, both of which form part of the transformation of the Walt Disney Studios park.

The Disneyland Paris app has also been updated with new features to improve visitor experience. An online hotel check-in service will mean less time spent at the reception desk, while the new Standby Pass will reduce the amount of time spent queuing for rides and attractions. Guests can book a timeslot to enter the physical queue via the app, which also now offers a dining reservation service.

Where was Emily in Paris filmed? 8 locations in France to visit from the hit Netflix series