The hills are alive! Fun on two and four wheels on a long weekend in La Plagne 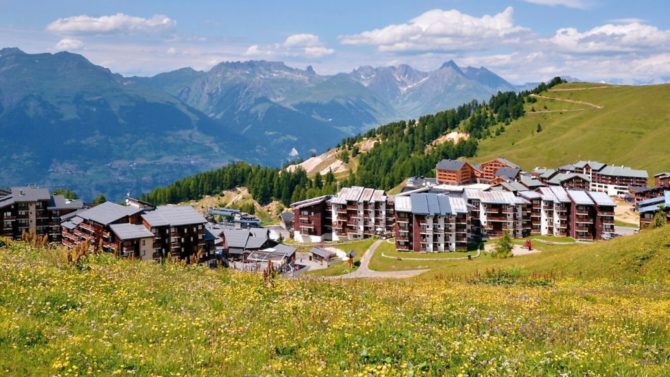 Summertime in the Alps combines sun, slopes and stunning scenery, without the tourist hordes. Helen Parkinson enjoys a high-altitude – and high-octane – adventure by boat, bike and car

The Paradiski resort of La Plagne is on a mission to become the summer stomping ground for adrenaline junkies – and if my present levels are anything to go by, they’re doing a good job. Having arrived in the Tarentaise Valley a mere hour ago, I didn’t expect to now be teetering on the edge of a rocky precipice in an unflatteringly clingy wetsuit, awaiting my watery fate.

We’ve just rafted down the Isère river, hurtling through the icy waves while perched precariously on the edge of a bright blue dinghy. With eight of us on board – four on each side -it seemed port had been doing a better job of paddling than starboard; at one point, we were speeding straight towards the rugged riverbank.

“Attention!” cried the guide and at his call, we all crouched on the boat’s sodden floor, holding our paddles above us vertically like plastic fins. Our craft crashed into the rocks, bouncing off with a satisfying thump; alas, it was ‘man overboard’ as one of our crew failed to withstand the impact and toppled into the water. He was soon hauled back on board by his friends, albeit with difficulty, as they were convulsing with laughter.

Naïvely, I thought I’d escaped a dunking. Then we moored up at a pebble beach and were shepherded by our guide to the top of the small cliff; here I stand, suddenly regretting leaving the boat. Finally, succumbing to cries of “Allez!” from my fellow rafters, I leap into the gorge with a shriek of delight – and a smidgen of terror. Arms flailing, despite desperate attempts to keep them at my side as instructed, I meet the freezing water with an enormous splash. It’s a welcome, if initially alarming, respite from the sultry, late-summer heat.

La Plagne – meaning ‘plateau’ in local parlance – began life as a ski resort in the early 1960s; a time of economic instability for rural communities, as the younger generation abandoned traditional work like mining and farming in pursuit of the city life. Four Tarentaise towns – Aime, Bellentre, Longefoy and Mâcot – united to secure their future and in 1961, the first ski lifts there opened. The area’s early success is partly credited to a certain Emile Allais, legendary skiing champion and creator of the omnipresent École du Ski Français, who became technical director of La Plagne in 1964. Today, the resort consists of eleven villages, the majority of which are sprawled across the Tarentaise. The exception is Champagny, on the other side of the mountains, which marks the gateway to the Vanoise National Park.

But, like many mountain towns, when winter bids farewell and the snow makes its retreat, La Plagne is no longer the icy queen of French tourism. Perhaps it is an issue of appearance; the purpose-built ski apartments at Bellecôte loom incongruously above the verdant valley. If you look beyond the concrete, however, there is a natural adventure playground waiting to be explored.

After a blissful night’s sleep, it’s time for an Alpine e-biking adventure between some of the Plagne villages. Since my idea of cycling fun is more Tour des Cafés than Tour de France, I’m looking forward to a leisurely ride.

I’m greeted at my hotel in Plagne 1800, one of the prettiest parts of the resort, by friendly Fabien, a local expert who knows all the best paths in the area. He sets me up with one of his bikes and after checking I can stop and start it sufficiently on the hotel driveway, we head for the hills.

Even the steepest ascents feel like easy-going promenades, with the motor powering the bike along. Winding between lush mountain pastures, with a pit-stop in Plagne Bellecôte, we eventually come to rest at a viewpoint where Mont Blanc’s snowy peak proudly photobombs many a tourist snap. Here, Fabien points out marmots peeking out of their burrows and we listen in amusement to their high-pitched song.

Further along, near a particularly big herd of chestnut-coloured cows, stands the Fromagerie des Alpages. We peer into the cheese caves where delicious wheels of Beaufort are maturing, before sampling the finished product in the nearby delicatessen.

Lunch is tartiflette and a bolée of sweet local cider at a farmstead called Le Forperet in Montalbert; it’s ski-in, ski-out here in the winter, but now a fierce sun-trap. Donkeys and goats graze freely on the meadows below the restaurant terrace and a cute Beaufort calf is enjoying being fussed by some younger guests.

The ride back home is steep and uphill; thankfully, however, we’re not going to tackle the z-bends of the D221 that have been undertaken by the Tour de France peloton. Instead, we pass the equally steep descents of the bobsleigh track, used during the 1992 Winter Olympics in neighbouring Albertville. As we finally reach the modern yet cosy-looking chalets of Plagne 1800, I’m sad to arrive back at the hotel and surrender my bike.

It’s not long before I’m swapping two wheels for four at the Jaguar Land Rover Centre – the first of its kind in the world – in Plagne Bellecôte. Both children and adults can take to the wheel of a beautiful automatic Jaguar; children in an off-road adventure course, adults on the roads, and always completely free of charge.

I’m sitting nervously behind the wheel of an intimidatingly large Jaguar I-Pace four-by-four in a car park in Plagne Bellecôte. Being both my first time commandeering something other than my old but reliable Corsa and driving on the ‘wrong’ side of the road, my foot trembling as it hovers over the accelerator ought to be forgiven. After all, I don’t want to christen my ride’s sparkling amber paintwork with its first scratch.

Fortunately, I’m not alone in my endeavour; I’m joined by a cheerful Savoyard instructor in the passenger seat who claims to have the upmost confidence in my abilities. He clearly didn’t see the last time I attempted to parallel park.

First we tackle the children’s off-road obstacle course, with its slalom and water challenge, then it’s time to hit the road in earnest. “Have you ever ridden the Space Mountain rollercoaster at Disneyland?” asks my instructor. When I nervously shake my head and ask why, he replies with an ominous grin: “You’ll see.”

We make for the mountain roads and I’m impressed by how the I-Pace makes light work of the climbs. It even has automatic braking as we approach each corner! Then, on a stretch of open road, my instructor encourages me to try out the acceleration. The car shoots forwards and our heads all jolt back with the G-force. He’s right – it’s a rollercoaster ride, and an incredibly fun one at that.

Back to the base and it’s time to try out the Land Rover. We take to the ski slopes, fortunately without snow, and try the steep trails, which the car takes to like a mountain goat. Eventually, I’m allowed to drive it back to my hotel and I’m relieved to be returning the car – and its passengers – in one piece.

Relaxing in the hotel’s hot tub as the sun sets, with Mont Blanc basking in pinky-orange glow in the distance, I feel exhausted in the best possible way. A ski resort may not be the sort of destination that immediately springs to mind for a summer break, but La Plagne certainly gives the Mediterranean a run for its money.

By air: Helen flew to Geneva from London Heathrow with British Airways (flight time 1hr 35; britishairways.com). From Geneva, La Plagne is around a 2hr 30min drive.

Hôtel le Cocoon – A modern yet rustic-feeling chalet that lives up to its name as a homely holiday base, come sunshine or snow.

Le Forperet – A mountain farm offering hearty food with a view. Take a seat on the sun-trap terrace and choose from a range of Savoyard specialities including the famous tartiflette. Mains from €16.80

Le Refuge du Laisonnay – Sausages are the speciality at this refuge at the gateway of the Vanoise National Park. Enjoy some diots au vin blanc or pormoniers in the garden restaurant

E-Biking, 73 Tracks – E-biking tours for all levels with a friendly, English-speaking guide

Jaguar Land Rover Experience – Available in both winter and summer, for children and adults. For the adult experience, a driving license is required.

Previous Article Win! One Summer in Paris by Sarah Morgan
Next Article 10 ways to learn French as a family