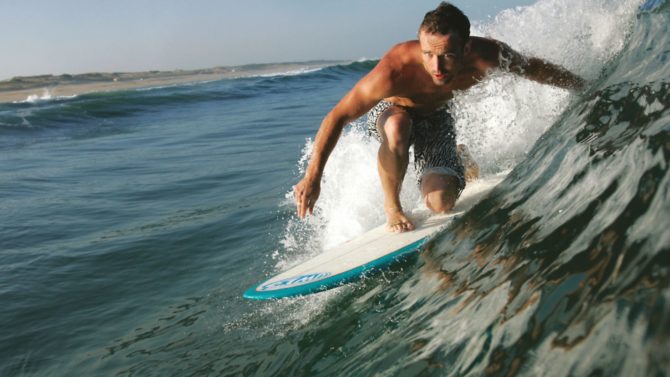 New book Epic Surf Breaks of the World showcases where surfers and enthusiasts can seek out the ultimate wave, including La Gravière on France’s Atlantic coast

Brendan Buckley visited Biarritz in France for crêpes and café au lait. But after sampling Hossegor’s famous pounding beach break, he decided to move there for good.

“I think I’m almost there,” my friend told me over the phone. “The next station is Pay-o.” “Maybe Bayonne?” I replied, because it made more sense, geographically, and, well, there is no such place as Payo in France. I assumed he was just trying to repeat what he’d heard over the train’s loudspeaker.

I’d moved from the US to Biarritz three years earlier and was just beginning to get the hang of the language. My best friend, however, was visiting France for the first time. But he wasn’t exactly here for a French lesson. He had recently embarked on a landlocked year of studying in Italy, and four months in he needed to break the longest dry spell of his surfing life. It was his singular ambition for the visit. As he put it: “I just need to get barrelled.” He came to the right place.

Hossegor is the epicentre of wave riding on the European continent, hosting the entire spectrum of surfers: long-haired, longboarders with groovy vans; performance-obsessed shortboarders, who do jumping jacks in spring suits; old men who shred; little girls who shred. While Biarritz – the larger, more famous city, some 40 minutes to the south – also has some great surf, it doesn’t get the world-class waves of Hossegor.

All kinds of surfers make a pilgrimage to La Gravière, either to paddle out and take on the notoriously fast, barrelling beach break, or just to stare out at the bombs as they detonate so close to the sand it’s hard to imagine getting a few turns in. You’ve probably heard so much about ‘La Grav’ that you feel like you’ve seen it or surfed it even if you’ve never been to France. It’s a wave that surfers gravitate toward, regardless of what the reports tell them.

The odds were in our favour, however, as it was late October. In autumn, the town shuts down and the waves turn on. The calendar says winter doesn’t begin for another two months here, but it actually begins right after the annual WSL contest in mid-October. Straight after this there’s an exodus: parking lots empty and windows are shuttered. Nightlife hotspots like L’Escargot shut down and even Dick’s Sand Bar turns the volume on the stereo down a little.

Instead of driving straight to La Grav, we did something a little more French: we stopped for a glass of Bordeaux at a bar outside Les Halles. This, I explained to my friend, was one of the ways in which France changes you – especially if you’re an American expat with overly romantic notions about the French lifestyle. I fell in love with Hossegor on my very first trip, in which I indulged in just about every cliché available to me. I used terribly broken French every chance I could; I had picnics on the beach while the sun slipped into the Atlantic; I drank wine in romantic cafés and almost convinced myself I enjoyed oysters; and I fell more deeply in love with my partner here. I also caught really, really good waves.

My friend and I headed to La Gravière the following morning as the sun was rising. We ran across the dunes until the ocean revealed itself. The waves looked fun – but although my friend was bursting with excitement, I told him that we could do better. He seemed annoyed to be passing up perfectly good waves, but Hossegor holds a long stretch of great breaks and I happened to know that when La Grav isn’t really cooking, hunting for another good sandbar almost always pays off. Plus, La Grav wasn’t going anywhere.

Hossegor is on the southern end of a long and straight stretch of coastline that is forever at the mercy of the moody North Atlantic. As we drive, the crowds thin. The towns eventually surrender to a forest of pine trees, and beach accesses become fewer and further between – as do the surfers. As predicted, we found a fun left bowling into the beach with just two people out. We suited up.

A few hours later, sore, sunburnt and ravenous, we hit crêperie Cloarec in Seignosse; a crêpe here is basically the French version of an energy bar. The beach just in front of the crêperie, Les Estagnots, happens to hold another fun, but tricky, wave. We paddled out again and I watched as my pal struggled hilariously to figure out the currents and awkward bowls.

Afterward, we grabbed a beer at Café du Paris, a typical French brasserie (albeit covered in surf posters and stickers). After that we hit Chez Minus to scarf down some mussels. Diversions like these are part of the rhythm of surfing life here. Hossegor was always a popular beach destination for the French, but as surfing grew in popularity, it became intertwined with French culture in a way that feels unique and uncontrived: this is a place where you can buy wax at a boulangerie. Eating, drinking, and people-watching are a way of life here.

The following day, winter arrived in earnest: heavy rain, oversized swell, troublesome wind. And we still hadn’t surfed La Gravière. We found a few waves at nearby La Centrale, but the weather simply wouldn’t let up. In fact, it was looking like my friend’s trip might end before I could show him the area’s best wave; and this might be my fault, since I had steered us away from it a couple days earlier.

My friend’s flight back to Italy departed from Bordeaux, a two-hour drive away. The day before he was set to leave, he decided to rent a car just in case he would need to hit La Grav and then head straight to the airport from there.

We woke at dawn on his final day and drove separately to Hossegor. We didn’t even bother to check the waves this time – we were surfing La Grav no matter what. When we arrived, however, we could see it was big. Almost too big.

We paddled out anyway and proceeded to spend most of our time dodging the bombing closeouts, picking off a few decent corners here and there. Eventually, I had to head to work. We said our goodbyes and I left him in the lineup.

Four hours later, my phone rings. It’s a local who I surf with occasionally. But when I answer, it’s my best friend on the line. Turns out, he had taken the key fob of his rental car into the ocean with him. He couldn’t start his car when he got out – so he simply paddled out again. Indeed, he surfed for another three hours, missing his flight completely. Apparently, the tide came in, the swell dropped a bit – and the waves turned on. It was good, he told me.

Reproduced with permission from Lonely Planet © 2018

Epic Surf Breaks of the World by Lonely Planet, £24.99, is published in hardback.

Dive into a wellbeing escape on the Atlantic coast in France

A weekend in Saint-Jean-de-Luz in French Basque Country