First published: 15 May 2017 by Sophie Gardner-Roberts 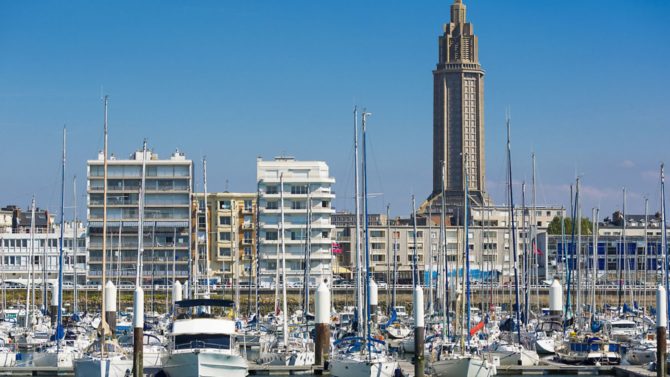 Almost entirely destroyed during World War II and then rebuilt, Le Havre is a unique city on France’s northern coast and is celebrating its 500th anniversary this year. Here’s our insider’s guide to the main attractions, hotels and restaurants as well as an insight into buying property and living in Le Havre

Long dismissed as a dull stopover city, Le Havre in Normandy, has an unexpected side that encourages innovation and offers a surprisingly good quality of life.

Almost entirely destroyed by World War II bombing, the port was rebuilt by Belgian architect Auguste Perret, whose pioneering use of concrete shaped the city as it is today. Construction work began immediately after the war as the government was eager to rebuild one of its most important ports and make Le Havre a shining star of post-war reconstruction.

From 1945 to 1964, Perret formed a working group of architects to design a city that would eventually house 40,000 people in 10,000 apartments. His bold design with its uniform lines, large open spaces and monumental buildings, earned a listing as a UNESCO World Heritage Site in 2005 and has inspired architects the world over.

Perret’s town planning required detailed calculations to model each apartment block using similar dimensions. The side of every building would be exactly 6.24m, a measurement often referred to by locals as a metaphorical ‘musical note’ synchronising the city.

A port town in Normandy, Le Havre is located on France’s northern coast in the Seine-Maritime department. There are regular ferries from Portsmouth to Le Havre run by Brittany Ferries and the city is only 2 and half hours from Paris by car.

What to see and do in Le Havre

Everywhere you go in Le Havre you are struck by the distinctive architecture of the rebuilt city. One of the most impressive elements of Perret’s reconstruction is the Hôtel de Ville, or town hall, with its 70m-high tower overlooking a large square and park. It sits at the point where the old and the rebuilt town meet.

The first four housing blocks to be built after the war are on Place de l’Hôtel de Ville; the flats were purchased by inhabitants using their war damage compensation. Today these blocks, known as îlots, are run as co-propriétés where owners make decisions regarding any common issues such as maintenance or communal festivities. Today you can see a reproduction of a show flat, as it would have been furnished in 1946, in a permanent exhibition.

The most iconic construction, however, is the St-Joseph church whose octagonal tower rises 107 metres above Le Havre’s skyline. Its construction began in 1951 but was completed after Perret’s death.

Such creativity has inspired architects to embrace modernism in their designs in more recent years. One such example is Oscar Niemeyer, a Brazilian architect who built Le Volcan, Le Havre’s cultural centre and theatre, in 1982. Shaped like a volcano, it is one of the town’s most striking buildings.

More recently, Le Havre has become a pioneer of urban planning with projects such as the Cité A Docks – the first student residence in France to transform recycled containers into studio apartments – and the facelift of the Grand Quai du Havre, the seafront stretching from the fishing port to the leisure marina.

Le Havre’s maritime trading past is visible in the old docks and harbours (bassins) located in the centre of town in the St-François district. Founded in 1517 by François I, the port became the centre around which the town gravitated and developed. Its location at the mouth of the Seine was a strategic military position in the 16th and 17th centuries, but it was thanks to international and colonial trade – in coffee, cotton and wood – that Le Havre found fortune. It became a transatlantic port for more than half a century for travellers eager to discover the New World, and was also the seaside resort of choice for Parisians from the mid-19th century, thanks to the railway connection from the capital. In recent years, the quays have been revamped to create attractive and open public spaces. The Docks Vauban, for instance, were transformed into a shopping and leisure centre after converting the old storage warehouses.

As the birthplace of Impressionism, it is an ideal base for art lovers to immerse themselves in the ever-changing pastel colours and light of the coast which were so loved by artists in the 19th century. Claude Monet painted Impression, soleil levant in the harbour in 1872, giving the artistic movement its name and anchoring its foundation in the city. Today, the MuMa – André Malraux Museum of Modern Art – houses the second largest collection of Impressionist art in France after the Musée d’Orsay in Paris.

The town embodies many aspects of Normandy’s art de vivre, including gastronomy and a love of the outdoors. You can shop for local products in Le Havre’s daily indoor market on Place des Halles Centrales or pick up fish straight off the fishing boats at the Place St-François fish market.

In contrast with the concrete buildings, there are plenty of green spaces including beautiful hanging gardens in a restored hilltop fort offering views over the town and harbour. The Montgeon forest, a 240ha park, is the town’s ‘green lung’. But the highlight for many locals is the 2km-long beach in the heart of the town. It is often busy with people soaking up the sun, windsurfing or canoeing.

From 27 May to 5 November 2017, the city of Le Havre will be celebrating its 500th anniversary with plenty of festivities and events taking place over five months. There will be exhibitions in the MuMa including the return of Monet’s Impression, soleil levant. There will also be street parades and an opening and closing ceremony.

The lively Taverne Paillette is popular with the locals probably because of the generous bowls of mussels, fresh lobster platters and crab dishes it served up along with a selection of homemade beers. Make sure to book! http://www.taverne-paillette.com/

If you fancy splashing out then try the two-Michelin-starred Restaurant Jean-Luc Tartarin. Just steps from the sea, the restaurant offers locally sourced produce in elegant and creative dishes for a gastronomic experience.

Budget: In the heart of Le Perret quarter, Hôtel Oscar is in an excellent location for exploring the city just five minutes from the Hotel de Ville and 15 minutes from the beach. The hotel is in a quirky 50s-style property with the 50s-theme extended to the décor. (Doubles from €41)

Mid-range: Perched in a higher part of the city, the quaint les Chambres du Chat Perché is housed in a wooden chalet and offers panoramic views over Le Havre and the Channel. (Doubles from €60)

Luxury: Just five minutes from the ferry terminal and less than 10 minutes from the beach, Hôtel Vent d’Ouest is a charming hotel with bright, nautical-themed rooms, elegant lounges and a well-appointed spa. (Doubles from €100)

Prices vary in Le Havre according to the district, but the seafront and centre remain quite expensive. However, with improved transportation, districts that were previously isolated are beginning to attract first-time buyers again.

Le Havre divides into two sections. The lower town has the old port and the Perret district while the upper town is accessible by tunnel or cable car. In the residential neighbourhood of the upper town, you’ll find larger properties on the west side (Les Ormeaux, rue Félix-Faure) and more modest districts on the east side and further from the centre. Property prices here can range from €1,819/m² in les Ormeaux to a more affordable €1,142/m² in the Mont Gaillard district.

Which French cities offer the best investment for property buyers

Originally from Cambridgeshire, Liesl Castell has lived in Le Havre for 25 years after first coming for a year out as a language assistant in her student years.

“My husband and I bought our house 11 years ago. It’s a detached new-build in the city centre in an area with a mix of houses and flats, just five minutes’ walk from a shopping centre/supermarket and 20 minutes’ walk from the beach. We live halfway up a hill and have lovely views of the town and over the Seine estuary towards Honfleur and Deauville.

“Being a port, Le Havre has a history of welcoming foreigners and I’ve never personally encountered any prejudice or had any setbacks because of my nationality. I enjoy living in Le Havre. Many people have a negative image of the city – English people who just drive through the port area, or French people who’ve never visited – but the city has changed. The post-war town is very airy and spacious, with wide boulevards and green spaces and even a forest/park just a few minutes from the centre. The beach is pebbly, but is very popular on sunny days when people go for a stroll or to the restaurants on the promenade, and the views of the sea are always changing with the light.

“Le Havre had the nickname of ‘Stalingrad-on-sea’ due to all the grey concrete buildings. Since then, there has been a considerable effort (and a lot money invested) by the town council to improve the town. The seafront has been landscaped, new facilities built (swimming pool, stadium, shopping centres, concert halls, library, tramway) to improve the lives of inhabitants.

“When I arrived, people had quite a negative view of their own city; now they are proud of it and Le Havre is starting to be seen as a tourist destination, so the general atmosphere is quite positive.”

Previous Article WIN! A copy of Fat Dogs and French Estates
Next Article Planning your retirement in France