In the footsteps of artist Henri Matisse in and around Nice 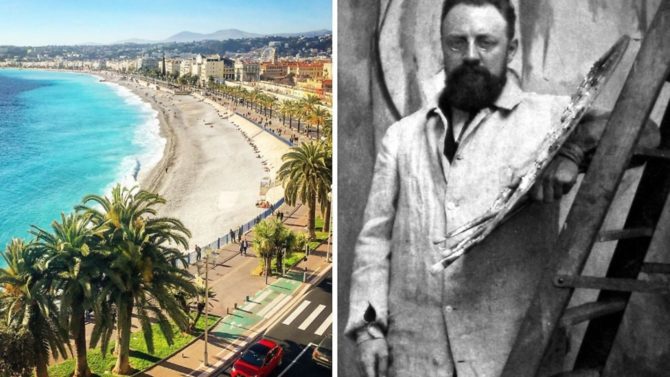 Although born in Nord and educated in Paris, Henri Matisse was most inspired by the Côte d’Azur

Just over 150 years ago, Henri Matisse was born to a merchant family in Le Cateau-Cambrésis in the Nord département. He originally studied law in Paris, but it wasn’t long before he realised that the legal life was not for him. Art became his passion, and he returned to Paris for very different studies. Matisse’s time in the capital lasted some 26 years, during which his artistic style grew and was shaped by both his studies and his numerous travels.

Matisse visited places as diverse as Corsica, London and Morocco among others. Arguably the strongest influence on his work, though, was the latter 37 years of his life, which he chose to spend on the Côte d’Azur.

Walking along the Promenade des Anglais in Nice, it’s easy to see why Matisse fell in love with it so quickly. The painter visited in the winter of 1917, with the intention of staying for a short while to recuperate from bronchitis.

He spent most of his time in his room at the Hôtel Beau Rivage but the light and colour by the Mediterranean swiftly made an impression as he observed in a letter to his wife Amélie back in Paris: “From my open window you can see the top of a palm tree” and “sky and sea blue – blue – blue.”

It did not take long before he was utterly captivated by the city and its scenery, making the decision to stay and taking studio space just around the corner from the hotel at 105 Quai des États-Unis.

“When I realised that every morning I would see this light again, I couldn’t believe how lucky I was,” he wrote. The views from that studio and his later suite at the Palais de la Méditerranée just a little further along the Promenade must have been incredible – wide vistas of sea and sky clearly making their impact on his work at the time.

Just a short walk along the sea front is the Old Town with its narrow amber-hued streets. It is easy to imagine Matisse spending time dining on Niçois specialities such as pissaladières and ravioli in cosy restaurants just like family owned Chez Acchiardo, which has been on the same spot since 1927.

The Old Town is where Matisse took an apartment in the grandiose building of 1 Place Charles Félix from 1921 to 1938, overlooking the sun-drenched fruit and flower stalls of the market on Cours Saleya. Nearby, he converted a garage on Rue Desire-Nil into a huge studio to give him enough space to work on the enormous and instantly recognisable painting La Danse, which shows how much the artist’s style had developed in his time in Nice.

Bold sinuous shapes give a sense of movement that never ceases and that glorious blue echoes the eye-watering azures of the sky and sea.

The bus network around Nice and the Côte d’Azur is a godsend. For just €1.50 you can get almost anywhere in the area and soon I’ve ‘climbed’ the hill up to Cimiez to visit the Musée Matisse, graced with its own bus stop.

With one of the world’s largest collections of the artist’s works, the museum also regularly runs themed exhibitions. Both the museum and the 17th-century Villa des Arènes in which it sits – named after the Roman arena and amphitheatre which were located here – are a fascinating way to spend a few hours.

Just a short walk away is the opulent Regina, built as a luxury hotel to welcome Queen Victoria but thereafter transformed into apartments. Matisse rented two third-floor apartments here from 1938.

Stretching out from the ruins of the arena and the ochre Villa des Arènes is an ancient olive grove. Beyond the wizened oliviers is the Franciscan Monastère de Cimiez with its cemetery. Graves and tombstones are dotted around the manicured grounds, including the simple tomb that Matisse shares with his wife Amélie (despite the fact she divorced him in 1939 after suspected infidelity).

The view from here stretches out around the coastline towards the sea and the Vieux Port. Here, the story has it that Matisse swapped brushes for paddles, canoeing every day dressed in his usual smart jacket and trousers.

Just an hour’s bus journey from Nice and the coast is the hillside town of Vence where Henri Matisse spent the final four years of his life. Already extremely ill, the artist came to the town at the request of his former nurse and erstwhile muse Monique Bourgeois.

Bourgeois had chosen to enter the Dominican convent in the town, but it had no chapel of its own, so she asked for the assistance of her former employer.

The result is widely considered to be the greatest achievement of the artist’s career. Just a 20-minute walk from the old town of Vence, sits the Chapelle du Rosaire. The chapel is a supremely serene space, light passing through the luminous stained glass windows creates complex and mesmerising patterns on the chapel floor.

Matisse designed the chapel as a cohesive whole, from the building to the stained glass windows, the candlesticks to the altar cloths and even several sets of chasubles. Along with the stained glass windows, the most obvious element is the stark and freeflowing mural of the stations of the cross. Painted by hand by Matisse, much of the time with a long stick from his sickbed, the murals are raw and expressive – the apotheosis of his explorations into movement, fluid form and pared down shapes.

The chapel has its own small museum, filled with studies for the murals and preparatory works, but ultimately stands alone as a place of peace and tranquil worship. Strolling back to town takes me past the Villa le Rêve, where the artist lived while in Vence, palm trees swaying in front of the impressive shuttered pink façade.

The street on which the villa and the chapel both stand is named Avenue Henri Matisse, a fact which reputedly greatly annoyed his artistic rival Marc Chagall who lived for a time in nearby Saint-Paul de Vence.

Chagall himself created a mosaic for the baptistery of the Cathédrale Notre-Dame de la Nativité in Vence, known as France’s smallest cathedral.

Back in the main town of Vence is the Musée de Vence/Fondation Emile Hugues. This compact museum housed in a 17th-century building is home to an extraordinary collection of drawings, graphic works, cut-outs and sketches by Matisse as well as pages from the influential book Jazz, which he began aged 74.

Leaving the museum and its treasures, a viewpoint sits just a few paces away. Looking across the river gorge, the Chapelle du Rosaire seems to glow in the remains of the fading light, its vivid blue roof tiles sparkling.

The hills, or Baous as they are known locally, loom behind as the shadows lengthen. While Nice may be where Matisse’s earthly remains lie, his spirit surely resides in the Chapelle du Rosaire in Vence.

In the footsteps of Pierre-Auguste Renoir