French city break: How to spend a weekend in Toulouse 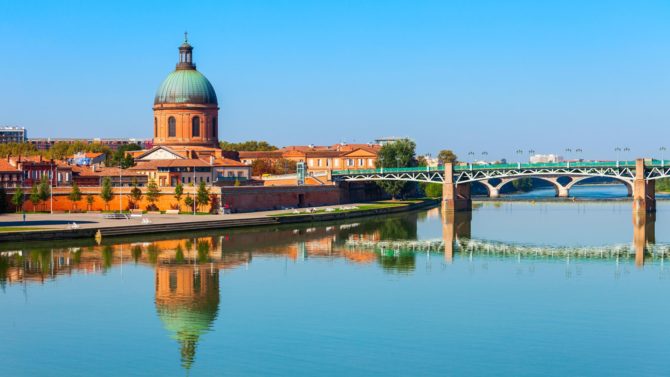 It’s France’s fourth largest city, the hub of Europe’s space and air industries and contains myriad attractions to tempt visitors of all ages. Yet despite its obvious attributes, there remains a quiet, unassuming atmosphere coursing through the narrow streets of historic Toulouse.

Nicknamed La Ville Rose, or The Pink City – thanks to the terracotta-coloured bricks used in the construction of buildings in this southwestern corner of France – Toulouse is easily explored on foot; something I had the pleasure of doing during a long weekend in 2020 before Covid struck.

Museums and culture in Toulouse

As well as many parks, the city entices visitors with, among others, historic monuments, an array of museums, twisting streets flanked by countless cafés and restaurants, picturesque churches and one of the grandest squares in the whole of France.

Place du Capitole, in the heart of the city, is the ideal spot from which to begin exploring Toulouse. But before heading off down the narrow network of streets, I wandered around this impressive square edged by some of the most popular cafés, bars and restaurants.

It’s here that you’ll find the emblematic City Hall. Built in the 12th century, this neoclassical masterpiece with its majestic brick and stone façade is also home to the city’s main theatre.

It’s equally impressive inside – and free to enter. I popped in and spent a while gazing at the elaborate paintings and artwork adorning three ceremonial chambers. Several artists are responsible for the intricate displays, including Henri Martin and Jean-Paul Laurens, whose contribution depicts the city’s history while Paul Gervais created an entire room dedicated to love.

By the time I exited the Town Hall, the sun’s rays had pierced through the heavy cloud which had blanketed the city since first light. According to the affable receptionist at my hotel, a sunny day between 11am and 3pm is the ideal time to visit the Unesco World Heritage-listed Basilica of Saint-Sernin. So that was next on my agenda.

Among Europe’s largest preserved Roman basilicas, it boasts an octagonal bell tower and gold-plated canopy. I arrived just after midday to experience the beautiful light display, courtesy of the sun streaming through colourful stained glass windows and illuminating the walls of this vast 11th century building, constructed in honour of Saint Saturnin, a martyr dragged through the city’s streets by a bull in the 3rd century.

Equally interesting from an architectural point of view is Saint- Étienne Cathedral. Rebuilt so many times over the centuries, it now sports a patchwork of styles, ranging from Gothic to Romanesque. The current structure dates largely from the 13th century and highlights include its Baroque altarpiece and ensemble of stained-glass windows. But a visit is worth it, if only to glance at the organ positioned in such a way that it appears to be suspended in mid-air.

Whenever I visit a city, I like to include one or two museum visits into my itinerary. The trouble with Toulouse, though, is which ones to pick because there are so many to choose from.

Of those I had time to visit, the Museum of Toulouse containing over two million exhibits with a focus on natural history was well worth it; and although it’s situated on the city’s outskirts, Cité de l’Espace is a must, too. Spotlighting the city’s role in international space programmes, I marvelled at everything from life-size spacecraft and planetarium shows to Martian meteorites and a fragment of the Moon.

Rest and relaxation in Toulouse

After a busy itinerary which included visiting churches, a cathedral and museums, it was time to rest my weary bones on a bench inside peaceful Jardin des Plantes. Located next to the National History Museum, it’s the city’s biggest park. Open since 1794, its original purpose was to supply medicinal plants for locals and medical students. It remains a true haven of tranquillity and there is so much to admire, including waterfalls and fountains surrounded by myriad flowers and shrubs.

How I liked to finish off each day’s sightseeing was to amble alongside the mighty Garonne, which flows from the Pyrenees to the Atlantic via Toulouse. One of the city’s most photographed landmarks can be found crossing the river in the shape of Pont Neuf, a 16th century stone bridge boasting seven arches. For those who want to explore more of the river, hop aboard one of the boats providing hour-long cruises.

All too soon, though, my weekend exploring the compact city of Toulouse was drawing to a close. Reflecting on being a first-time visitor to the city, I can honestly say that I was pleasantly surprised – and not only in terms of what attractions are on offer, either.

As a vegan, I’m often worried when travelling about whether I’ll find suitable places to eat. Thankfully, I needn’t have worried on that score because there are numerous cafés and restaurants offering either complete vegan menus or a decent selection of dishes.

So, with still more to see and explore, I think a return visit or two are called for. I can’t wait!

Where to stay in Toulouse

Hotel Le Grand Balcon: Located in the city centre, just a few steps away from Place du Capitole, this stylish 4-star hotel is a former guest house for aviators from days gone by, hence the display of pilot portraits and planes donning the walls. Doubles from around €95.

How to get to Toulouse from the UK

By air: several airlines, including easyJet, fly direct to Toulouse from the UK. Flight time approx. 1.5 hours. Flights with Jet2 are set to launch from Manchester Airport in summer 2022. An airport shuttle bus runs every 15 minutes from the airport to the city centre.