How to spend a weekend in Lourdes 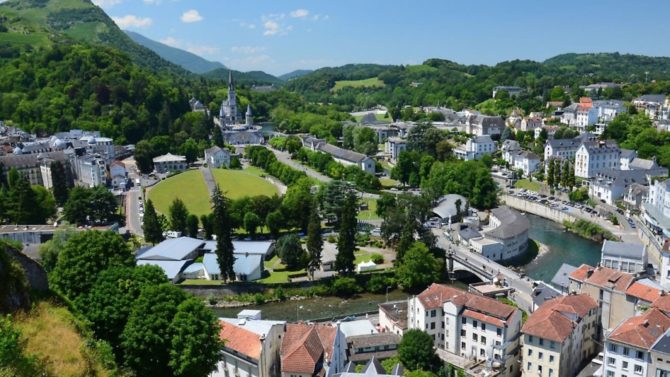 This pilgrimage destination attracts tourists from all over the world to its famous Sanctuary, but the Hautes-Pyrénées town is a great place to visit in its own right

As France’s premier destination for pilgrims, Lourdes in Hautes-Pyrénées is held in international esteem for its hallowed grotto and fairytale basilicas. But the city doesn’t stop at its churches; past the perimeter of the Sanctuary, beyond the garish souvenir shops and neon-fronted hotels, I found a well-connected holiday destination abuzz with culture and history – whatever you believe in.

With its immense religious importance permeating every guidebook, it’s easy to forget that Lourdes’ history surpasses the Marian apparitions. The most vivid reminder of the town’s pre-19th-century past is the château-fort perched on a lofty escarpment at the very centre of the town. It’s here, at this austere warhorse that guards the entrance to the seven Lavedan valleys of the Pyrénées, that I begin my journey.

The Counts of Bigorre made it their home during the 11th and 12th centuries, before it became a prison for the opponents of King Henri IV in the late 1500s. It continued as a jail beyond the French Revolution, until the end of the 19th century when the town bought it and transformed it into a tourist attraction.

Rather unlike the knights of yore, I zoom from the ground-level visitor centre to the ancient hilltop towers in a lift instead of conquering the stairs. At the summit I wander around the Musée Pyrénéen, complete with reconstructed farmhouse rooms, model houses and examples of traditional crafts; there is also a small but colourful botanical garden and a quaint model village. The château-fort even has its own beehives.

From the château I aim for the Sanctuary, wending my way downhill towards the Gave de Pau that slices the town in two. The route takes me past two fitting stopping points: Bernadette Soubirous’ Maison Paternelle and Maison Natale, also known as Moulin Boly.

It was Bernadette who is said to have witnessed the Virgin Mary 18 times in 1858 at the Massabielle Grotto while gathering firewood with her sister and a friend. The then-14-year-old, the eldest of nine children, came from an impoverished family and was a sickly youngster, having suffered from cholera. The humble moulin is free to enter and puts into perspective the extreme poverty in which the Soubirous family lived. However, the property is relatively spacious compared to the one-room former dungeon, Le Cachot, in which the family lived at the time Bernadette saw the apparition; this is also open to visitors.

The physical consequences of Bernadette’s vision and its ensuing fame are the grandest of churches – in stark contrast to her lowly living conditions. Crossing the river from the Moulin, I reach the imposing Porta Saint Michel entrance to the Sanctuary. Even from an architectural and historical perspective, this is a must-visit. The domain – property of the Roman Catholic Church – consists of three principal basilicas: the Upper Church, or Basilique de Notre-Dame de l’Immaculée Conception; the Rosary Basilica, or Basilique Notre Dame du Rosaire du Lourdes; and the Underground Church, the Basilica of Saint Pius X.

My first port of call is the Rosary Basilica, located just below the ‘main event’ of the fairytale-steepled Upper Church. Its façade is covered in gold murals and statues, and the inside is just as ornate; particularly the beautiful golden dome and the gilded crown and cross that tops the exterior. Next, it’s up the walkway that extends like welcoming arms around the basilica to the Upper Church. The building, with its distinctive 70m spire, was designed by Hippolyte Durand, who also masterminded the home of Three Musketeers author Alexandre Dumas.

The final church is like nothing you will see anywhere else: you have to head below ground. Built for the centenary of the apparitions in 1958, the Basilica of St Pius X is more like a stadium than a place of worship, with great concrete ballasts and modern stained glass decorations. Astonishingly, it can hold 25,000 people.

No visit to the Sanctuary is complete without seeing the famous Grotto, where all pilgrims converge. For those too ill to make the journey or who want to get the Lourdes experience from home, there is a 24/7 live-stream from the Grotto run by the in-house TV service.

The next morning, I decide to make like a local and head to the Halles: the covered 19th-century food market at the centre of the bustling town. This part of Occitanie is renowned for its gourmet delights, and they’re in no short supply here: the whiff of local cheese, wines and pastries mingle in the air. If you buy one thing, make it one of the regional cakes: there’s gâteau à la broche, a Christmas tree-shaped delicacy cooked on a spit, and tourte aux myrtilles, studded with blueberries and spiked with rum.

My pre-prandial over-indulgence guilt trips me into some hiking in the afternoon. Where better than the Pic du Jer? At 951m, it’s hardly the biggest peak in the area, but this makes it a pleasant climb on foot. It’s just on the outskirts of the town, so I decide to walk there, heading past the distinctive maroon town hall. There is a funicular taking tourists from the attractive green-and-white striped station to the peak that has been in use for more than a century, but the two-hour walk to the top is equally pleasant and not too challenging. From the summit, I’m rewarded with views over the Pyrénées that are unbeatable on a sunny day. For the brave, there are some fantastic mountain bike routes snaking down the slopes of the Pic du Jer and it has even hosted the Downhill Mountain Bike World Cup.

Finishing a busy, varied weekend with dinner at the Lac de Lourdes, just to the west of the Sanctuary, I think about how I’d almost dismissed the town as ‘just’ a religious tourism site. But with so much going for it – the largest number of hotel beds outside of Paris, a small but excellent airport just 15 minutes away, the pleasures of the Pyrénées on its doorstep – it deserves a reputation as a weekend getaway destination for all kinds of travellers. Lourdes will always be synonymous with spirituality but it is certainly no one trick pony; this is a place to truly discover that effervescent Occitan energy.

Find out more about Lourdes at lourdes-tourisme.com