How to spend a weekend in Reims 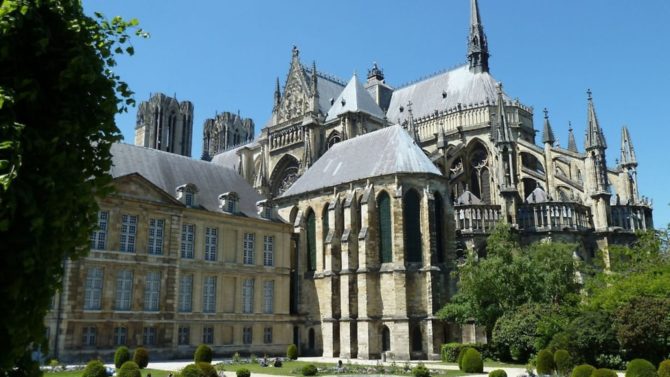 Famous for coronations and champagne, this north-eastern French city should be your next weekend break destination

Dominating Place du Cardinal-Luçon in Reims, the 13th-century Notre-Dame Cathedral is a sight to behold, with its monumental architecture and sculptural grandeur. You must really take time to admire the lavishly ornamented facade, which boasts an impressive 2,303 intricately carved statues depicting Biblical scenes and nobility – among them, the famous ‘Smiling Angel’ welcoming visitors by the left entrance. Thirty-three rulers were crowned here between 816 and 1825, earning Reims the name ‘Coronation City’. The cathedral is one of Europe’s most famed Gothic structures and an example of Reims’s rich cultural heritage. But the city’s historic allure is only part of its charm. Situated in the Marne département, Reims is also the gateway to Champagne’s prestigious vineyards.

Leaving the Gare de Reims, I head towards Place Drouet-d’Erlon in search of somewhere to have lunch. I’ve come here to indulge in the famous bubbly, but after a morning on the train, I’m craving something hearty and satisfying before my first dégustation. It’s Friday afternoon and the rush for a seat at one the many restaurants lining the lively square has started. I haven’t made any reservations, so I’m hoping I’ll get lucky and won’t have to settle for a takeaway sandwich. Sure enough, there’s an empty table right next to the window at Les 3 Brasseurs, a friendly brasserie serving traditional French cuisine and typical gastropub food such as burgers, flammekueches and planches de charcuterie or deep-fried snacks to pair with the different beers brewed on-site. I order an entrecôte, très saignant, and eat while watching the hustle and bustle taking place outside. It may be a rainy day in April, yet the atmosphere in the city is anything but dismal.

After lunch, I stroll to the heart of the square to admire the Fontaine Subé from up close. Erected in 1906 by André Najoux and dedicated to the four rivers that intersect the départment (the Marne, Vesle, Suippe and Aisne), it is crowned with a bronze statue representing victory and dating to 1989. This monumental landmark endured the bombings of World War I and was attacked again by the Germans in 1941 when they took the original bronze statue that kept guard over the square. Nicknamed ‘the Angel’, there is something ethereally beautiful about this new symbol of hope with outstretched wings that almost seem to flutter against the wind.

I wake up feeling refreshed after a relaxing evening and good night’s rest at Le Clos des Roys, a charming B&B just a stone’s throw from the cathedral. While enjoying a leisurely breakfast complete with a batch of owner Gérard’s freshly made pancakes, I practice my French with his wife Marie Anne. She tells me about her travels and about the history of the building, which once served as a trading house for fabrics and was almost completely destroyed in 1917.

Reims did not escape the ravages of the Great War unscathed, and much of the city had to be rebuilt during the 1920s and 1930s. This is evident in the many handsome Art Deco buildings, including the sumptuous Opéra de Reims rebuilt in 1927 (only the facade remained when it was bombed in 1914) and the Bibliothèque Carnegie, opposite the Palais du Tau, my first stop today.

Founded in the 4th century, this former residence of the bishop and archbishop, which also served as a banquet hall after the coronations, was named a Unesco World Heritage Site in 1991 together with the cathedral and the Musée Saint-Remi. It houses some of Notre-Dame’s statues, tapestries and other treasures, among them Charlemagne’s ornate talisman dating to the 9th century. Today, Palais du Tau attracts some 100,000 visitors per year, making it one of the city’s top museums.

After a day of sightseeing, it’s time for some serious sipping. Champagne’s hillsides, houses and cellars were declared a Unesco World Heritage Site in 2015 and together with Épernay, Reims is an important centre of the sparkling wine’s production. One of the most renowned houses in Reims is Taittinger. Founded in 1932 by Pierre Taittinger, the house is still in the hands of the family and counts 288 hectares of vineyards that produce various styles of champagne full of elegance and finesse. At its headquarters on 9 Place Saint-Nicaise, I take a tour of the historic vaulted cellars situated 18 metres underground and carved out in the 4th century. I learn that wines were first stored here by Benedictine monks in the 13th century. Their abbey, which once stood on this site, was destroyed during the French Revolution, but parts of the chapel can still be admired as well as the remnants of a staircase that led to the vestry.

The tour ends with a tasting, the part I’ve been looking forward to most. I sample the Comtes de Champagne Blanc de Blancs, Taittinger’s Cuvée de Prestige. Made with 100% chardonnay grapes produced in five out of the region’s 17 Grand Cru villages, sipping the vintage champagne is a luxury that must be savoured slowly and one of the most memorable experiences during my visit to Reims – a city that despite a tumultuous history has managed to retain its unique sparkle.

For more information about Reims, visit the tourist board’s website.

Discover Arles in France, known for its rich Roman history

Best of Bergerac: Where to eat and visit