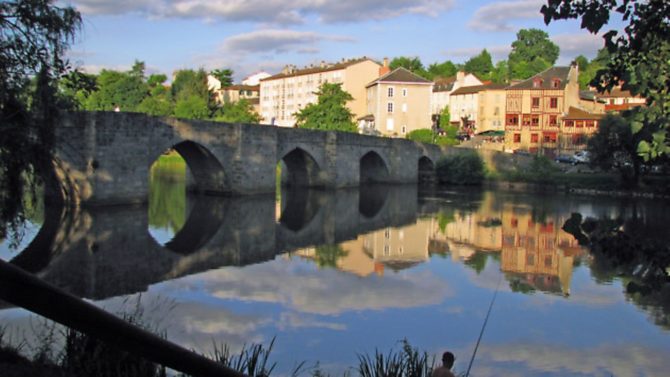 An insider’s guide to Haute-Vienne in Nouvelle Aquitaine, including the main attractions to visit on holiday, the best towns and villages to live in, the major festivals and events, and buying property in Haute-Vienne

Famous for its rolling landscape, the area is full of forests, lakes and rivers, with castles rearing up from the granite, and it has been compared to the British countryside of the mid-20th century.

The department is in fact one third forest, and with a population below the French national average, it is the perfect place for those seeking a tranquil retreat.

By train: Eurostar to Paris and then jump on the TGV to Limoges

By road: Limoges is 680 km from Calais

Places to visit in Haute-Vienne

Situated at the western part of the Massif Central mountain range, Limoges boasts a strong industrial past, renowned throughout the world for its famous porcelain, but also for its craftsmanship of enamel and stained glass which can now be admired in The National Porcelain Museum and the Musée de l’Eveché. Today Limoges is a major university town punctuated with large, pretty botanical gardens.

Limoges is steeped in history, and while exploring the town take time to marvel at the stunning gothic architecture of the Cathedral of Saint-Ètienne, the Quartier historique du Château and the grand half-timbered townhouses nestled in the Cour du Temple.

For photography lovers, the town of Bellac is worth a visit with cute-as-a-button hilltop houses, tranquil waters of the Vincou River under a beautiful bridge and boasts the birth place of famous writer Jean Giradoux. Rochechouart is also a pretty town to visit with a beautiful castle nestled behind its walls.

Haute-Vienne is a mix of industry and tranquil villages, serving as a haven for those overwhelmed by city life. Stroll around Saint-Auvent soaking in its medieval history or explore Mortemart, the only village in Haute-Vienne on the official list of the Plus Beaux Villages de France.

The department is also home to a number of charming châteaux, including the 15th century Château de Montbrun which once served to protect the borders of the Duchy of Aquitaine.

Things to do in Haute-Vienne

Those interested in the Second World War should pay a visit to the village of Oradour-sur-Glane. This French village was completely destroyed in 1944 by Nazi soldiers and the 642 inhabitants were massacred and has been preserved as a memorial, complete with ruined buildings and burnt out cars.

Haute-Vienne is known as a rural paradise and those in search of the ‘great outdoors’ will be spoilt for choice with two regional parks – Périgord-Limousin and Millevaches – in the department. These are perfect for hiking, cycling, horse-riding and other outdoor activities. Water sport enthusiasts should head to the manmade Lac de Vassivière, one of the largest lakes in France.

Haute-Vienne is the birthplace of the wonderful clafoutis, a dessert made with cherries and covered with a thick flan-like batter. The department is also famous for its apples, with some 80 varieties growing throughout the area.

Bursting with countryside charm, Haute-Vienne is becoming more popular with British expats seeking a peaceful French retreat. The most popular property styles in Haute-Vienne are charming farmhouses with slate roofs and Limousin cottages which generally boast a courtyard and outbuildings.

You can find properties in Haute Vienne for sale on the France Property Shop website.

Where you can buy a bargain rural retreat in France

Where you can buy a bragain city apartment in France

Previous Article Ratatouille recipe
Next Article The April 2017 issue of French Property News is out now!