First published: 7 May 2019 by Helen Parkinson 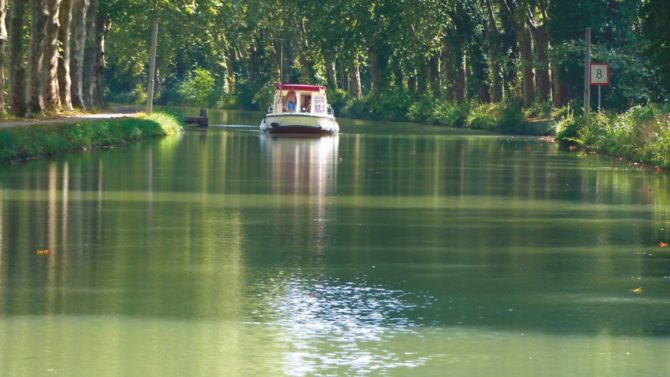 Discover what makes the Canal des Deux Mers, stretching between the Atlantic and the Mediterranean, a magical French holiday destination

While visiting the Bordeaux region of southern France, you may come across signs for the ‘Canal entre deux mers’, or the canal between two seas. Linking the Atlantic Ocean with the Mediterranean, it stretches for nearly 500km and is, in fact, made up of two canals that connect in Toulouse: the Canal de la Garonne, which starts at Bordeaux, and the Canal du Midi, which finishes in Sète.

Although the Canal de la Garonne starts inland, there is a good cycling track covering the 68km between the coast and the bustling city of Bordeaux. Straddling the Gironde, Bordeaux was the centre of the wine trade and its elegant Unesco-designated buildings reflect the wealth that it generated. Declan Lyons, author of Cicerone guide Cycling the Canal de la Garonne, explains that it was also a major port for trade, with French colonies importing and re-exporting coffee, peanuts and cocoa and, sinisterly, slaves.

Bordeaux is just the beginning of the many fascinating aspects of exploring the canals of southern France. The region between Bordeaux and Toulouse is steeped in history and culture. The rivers allowed early settlers access to the interior; they settled on the riverbanks and eventually villages and towns sprang up. The history of the development of the two canals is summarised by Declan in his guidebook:

The original purpose of the Garonne canal was to complete Pierre-Paul Riquet’s dream of linking the Atlantic Ocean with the Mediterranean Sea. The idea for some form of canal system had been around since Roman times to obviate the need to circumnavigate the Iberian Peninsula… Work began on the Canal du Midi in 1666 and was completed in 1680. It proved to be a great success and continued to operate commercially into the mid-20th century. Despite the difficulty in travelling between Bordeaux and Toulouse, social and economic instability meant that was not until the 19th century that the idea of the canal connection was seriously considered. Jean-Baptiste de Baudre was the bridge and roads engineer chosen to oversee the building of the canal between Toulouse and Castets-en-Dorthe. The project began in 1839, building the canal in stages. The works were completed on 12 March 1856 when the canal’s full length was declared navigable.

The region produces some of the best food and drink in France; its fertile soil produces an abundance of fruit, vegetables and cereals, while the rich grasslands are grazed by cattle and sheep. As you cycle from the Atlantic coast and Bordeaux, you move from the rich Atlantic foods in Gironde to the Mediterranean-influenced foods in Toulouse, and onwards to the Mediterranean coast itself. All gently washed down with the wines of Bordeaux, which is known as the top wine-producing area in the world.

The wildlife and scenery are fantastic, too; canal towpaths meander in the dappled shade of 100-year-old plane trees, meadows and woodlands with their associated birdlife give way to fields of nodding sunflowers and apple orchards. Herons, ducks, orioles and kingfishers keep watch for fish, while overhead you can often see buzzards, harriers and kestrels riding the warm thermals in search of small prey. And all the while vineyards line your route from the Atlantic to the Mediterranean.

The canals themselves are fascinating, and you cannot help but marvel at the feats of engineering. On the 281km between Bordeaux and Toulouse the locks on the Canal de la Garonne are numbered in reverse order from number 53 just outside Bordeaux, to number one in Toulouse. Beyond Toulouse, the engineering of the canal is truly miraculous. The guidebook Cycling the Canal du Midi describes some of the most outstanding:

The Malpas Tunnel is 170m long, 7m high and 8m wide, and was completed in just eight days in 1679. Nearer to Béziers, the ‘nine’ Fonsérannes locks are the most dramatic works on the canal system, and enable the canal to drop 22m and join the Orb river. Boats crossed the river and then rejoined the canal. An aqueduct, built in 1855, obviated the need for the river crossing.

The locks form a water staircase for barges. It is well worth stopping and watching boats ascend and descend. The locks operate in the morning and afternoon with a break between 12pm and 2pm. There is a mechanical lifting system on the southern bank of the canal (no longer in use). The buildings on each side of the canal originally housed canal workers. There is a church too. Although still referred to as the ‘nine’ locks, there are only eight locks now. In addition, the seventh lock is a basin that leads to the aqueduct that crosses the Orb. The eighth lock is no longer used as it leads to a branch of the canal that served Béziers.

Together, the two Cicerone guidebooks by Declan Lyons will give you all the information and inspiration you need to complete the entire route from the Atlantic to the Mediterranean. And at the end of your ride, which will take in the order of three weeks, you can dip your toes in the warm sea and look back at the wonderful sights you have passed: Bordeaux, Montauban, Toulouse, Castelnaudary, Carcasonne and Béziers, the food and wine you have enjoyed, and the friends you will have met on the route.

Declan Lyons is the author of two cycle touring guidebooks to the region, and has spent many years cycling and touring in the south of France, using sections of these canal routes on multiple occasions when cycling between his home in Ireland and the south of France.

Tips and tricks for cycling in France

Previous Article Win! Baptiste on DVD
Next Article CroisiEurope river cruises have it all